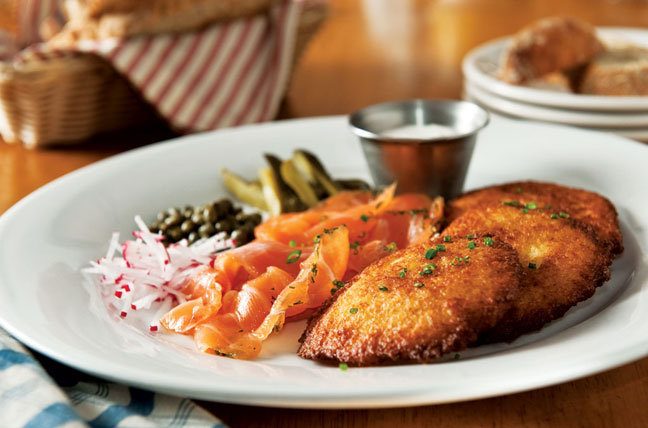 In the lineup of world cuisine, you have to admit German food doesn’t take any awards for glamour. There was no Julia or Diana or Marcella ushering its arrival onto U.S. shores in the last century. You rarely hear a food critic rhapsodizing over nouveau schnitzel or fusion sauerbraten. To some, it’s merely a means to soak up beer during Oktoberfest.

How then to explain the popularity of Schulte & Herr, a cozy German restaurant located in what is often thought of as a sketchy part of Portland’s downtown? Since opening in August of 2011, Schulte & Herr has become something of a local and online darling, with glowing reviews, devoted regulars, and a brisk business that keeps its mere nine tables often full. (Reservations are strongly suggested.)

“We don’t get a lot of foot traffic,” laughs Steffi Davin, who owns Schulte & Herr with her husband, Brian, when asked about their choice of location: a modest storefront on Cumberland Avenue, one block west of Congress Street, with a drop-in center for homeless teens next door. But when the couple moved from Northampton, Massachusetts, to Portland after nine years in Berlin (she’s German, he’s from the U.S.) and had no jobs, they stumbled upon the space online. While both have restaurant backgrounds — Brian is a graduate of the New England Culinary Institute; Steffi has worked extensively in service — they’d never owned their own restaurant. The rent was affordable. They thought, why not?

Under the shade of a chartreuse awning, a chalkboard in the window states “Homemade German Food,” which sums up the simple ethos of the place. The dining room is plain but homey: bead board on the lower walls, paneling on the upper, adorned with original artwork. Each party is greeted like old friends. Whatever you’ve brought to drink (it’s BYOB) is attended to, a wine opener and glasses are procured. Your beer is tucked in the kitchen’s fridge. The tables are spare and closely situated, so you can eavesdrop when a neighboring diner wants to try out his rusty German. Actually, it seems everyone wants to take a stab at German, even if it’s a mangled Es schmeckt gut that’s been rehearsed all afternoon. If you forget to pay your bill until you’re almost out the door, you’re reprimanded with a laugh and a hug.

One of the greatest challenges of Schulte & Herr is deciding what to order. You’ll want it all. To help get you started, a basket of homemade rye breads — including a toothsome sourdough — arrives on your table, accompanied by a ramekin of liptauer, a cream cheese spread dressed up with cornichons, paprika, and capers. You must watch yourself. Without knowing it, you can easily polish off the entire basket while scanning the menu. All the familiar favorites are there — schnitzel, sauerbraten, wursts, a Sunday roast — and they are turned out of Brian’s kitchen in a way even Oma would approve. But what’s surprising here is the number of less-meaty alternatives.

A must-have is the potato pancakes with house-cured lox. The pancakes, pillowy puffs with a slightly crunchy exterior, are the perfect vehicle for a pile of buttery ribbons of delicate salmon, topped with cornichons, capers, matchstick radishes, and a dollop of horseradish sour cream. When Steffi presses the borscht (with bits of oxtail) on you, saying it’s the best around, just believe her and order it. The zwiebelkuchen — a caramelized onion and gruyere tart — is dense and rich enough to stand as a main, especially paired with the roasted root vegetables or the zippy salad of vinegary potatoes, pickled beets, radishes, arugula, and smoked trout — a freshening moment in a hearty meal. And be sure to save room for one of Steffi’s homemade desserts — if you can.

So, lower the gangplank and strike up the oompah band. Thanks to Schulte & Herr, German food’s time on these shores has finally arrived.

Elizabeth Peavey is a freelance writer and teacher. She is most recently the author of Glorious Slow Going: Maine Stories of Art, Adventure and Friendship.

11 Pieces of Maine-Sourced Gear for a Summer Spent Outside