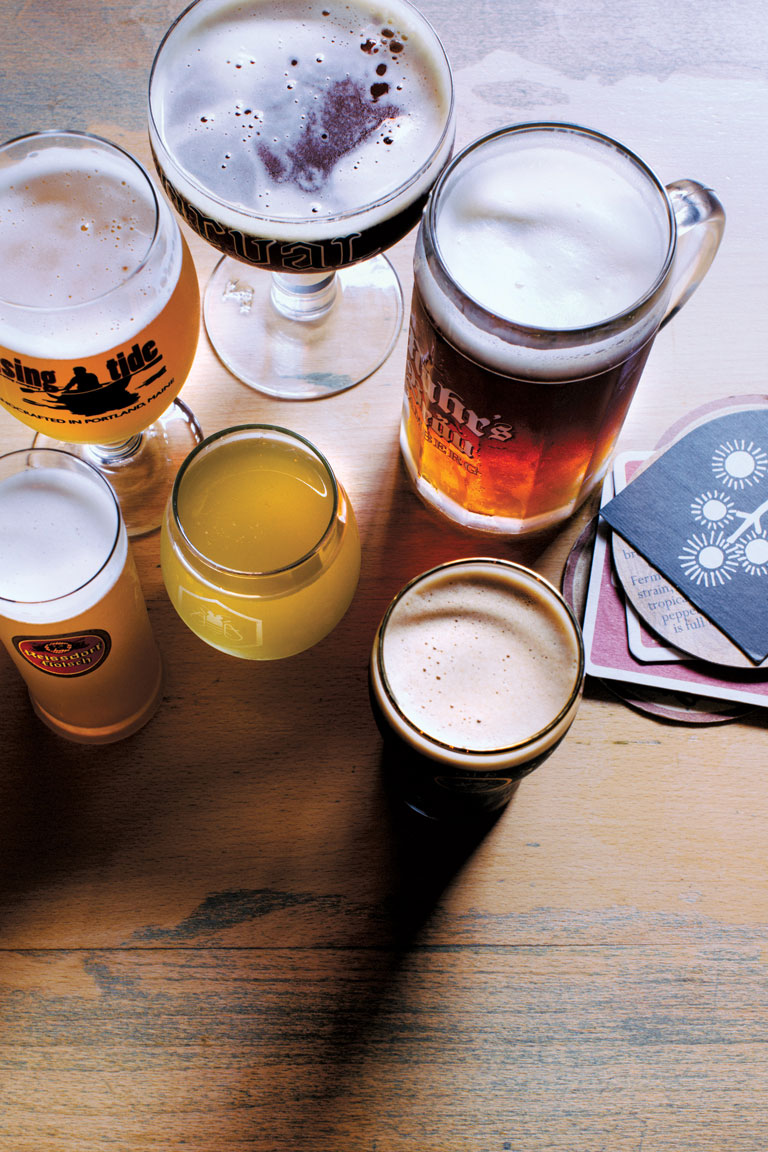 If you grew up when Bud was the beer and Heineken was the beer of sophisticates, you may require a crash course in craft beer, now that microbreweries are bubbling up all over Maine. Before you start random swigging, your taste buds might appreciate a classical education at Portland’s Novare Res Bier Café. The modern metro rathskeller offers more than 300 small-batch beers, primarily European and out-of-state imports, as well as a selection of local brews. Novare’s monster beer menu has landed it on national best beer bar lists and garnered it five-star ratings on travel and dining websites, as well as a reputation as a mecca for beer enthusiasts. And it serves some of the best bar food around.

Tucked into an alley off Exchange Street, it is nearly invisible to passersby, who might easily miss the modest sandwich board sign on the sidewalk. The Latin phrase novare res means “to start something new,” and in 2008 owners Eric and Julie Michaud adopted it as a call for a “beer revolution.”

A precocious brewer who began by experimenting in his parents’ Yarmouth kitchen, Eric Michaud spent a semester in Japan brewing sake with a master brewer (or toji). After another semester in Europe interning with Trappist monks and studying beer culture — all for college credit — and a stint “away” managing bars that specialized in imported beer, he took a look at his hometown and realized something was lacking.

“Maine’s a pretty small place,” he says, “and even though there are good breweries here, there are a lot more around the world. At that moment, no one was bringing in these amazing European beers, or even beers from other states.”

The Michauds had a shock of recognition when a broker showed them the basement of the 1825 Canal Bank building where, four years before, they had planned their wedding with the former occupants, Black Tie Catering. They saw immediately that bank vaults would make excellent beer caves. With the help of family and friends, they built the space out to reference bars in Belgium, Germany, and England. Golden beechwood tables and bar tops, a tin ceiling, long communal tables, beer and event posters, a dart board — and no TV — all blend with the original exposed brick walls to create a cozy atmosphere that invites you to linger. In summer, their Biergarten, one flight up on the adjacent deck, is one of the largest open-air bar spaces in downtown Portland, a family-friendly spot refreshingly distant from raucous Commercial Street.

To the craft beer neophyte, Novare Res’s bottled beer menu, which is divided into categories by place of origin and style, can be daunting. What are lambic and witte, anyway? And what on earth would be drinkable under the “sour/wild/funk” heading? The only answer is to start sampling, perhaps with one of the 30-odd beers on tap, a list updated daily. When one keg empties, a different beer in a similar style replaces it, and servers will let you try before you commit. For serious beer enthusiasts, these outer fringes and rotating draughts are nectar of the gods.

At first, the only food Novare served was small plates of imported charcuterie and cheeses, but, as general manager Shahin Khojastehzad puts it, “People were like, ‘I love hanging out here but there’s only so much meat and cheese I can eat.’” The current menu of appetizers, sandwiches, and salads aims for interesting and unusual combinations, and servers will suggest possible beer pairings. Julie Michaud, who lived in Tokyo until she was 10 and has traveled extensively in Southeast Asia, directs Noavre’s fusion twists on traditional bar food.

A small plate of salty jamón ibérico takes on a pan-European flavor — a smear of brown mustard, thinly sliced baguette, a hot pickled pepper, a dollop of honey, and a few currants — that pairs well with our server’s suggestion of a De Dolle Boskeun, a light Belgian draught with a hint of bitterness that also tames the creaminess of Nancy’s buttery sheep’s milk Camembert.

The Japadog, their “haus dog,” sends two red hot dogs in buns to Asia with ginger wakame relish and gives us an education in Japanese condiments: misochup (ketchup made with miso), tōgarashi (hot pepper), and Kewpie mayo (Japanese Hellman’s). The menu’s lone Japanese beer, a Sapporo German-style lager, is a good accompaniment. A Vietnamese báhn mì sandwich on a Southside Bakery baguette layers the traditional ingredients of ham, liver pâté, cucumber, pickled carrot, and daikon radish, then adds a hot backbite of thinly sliced raw jalapeño peppers. A well-balanced RegenBoog Vuuve, with hints of orange and coriander, rounds out the meal. The elegant jerk chicken tacos, made with soft corn tortillas, are chewy and crunchy, slathered with cilantro-lime crema and a mango scallion slaw. However, the focus always stays on beer; it is served quickly, while food arrives at a relaxed pace.

Taste is subjective, of course: one person’s favorite sour beer may be another’s rank concoction. From a lighter-than-light Belgian De La Senne, something you could drink all afternoon, to the dark depths of Caracole’s Nostradamus (“tastes like horehound drops”), any study will be rewarded.

You may even be inspired to go for a Ph.D in Craft Brew. Drink each of the 230 beers on Novare’s Uprising list and you’ll be rewarded with a chalice engraved with your name, a numbered cubby in the Chalice Vault, a key to the door, and a lifetime 25 percent discount on beer. It could also give you major bragging rights with beer geeks.