Portland’s new fermentation-focused market carries everything from kimchi to preserved lemons to sourdough. 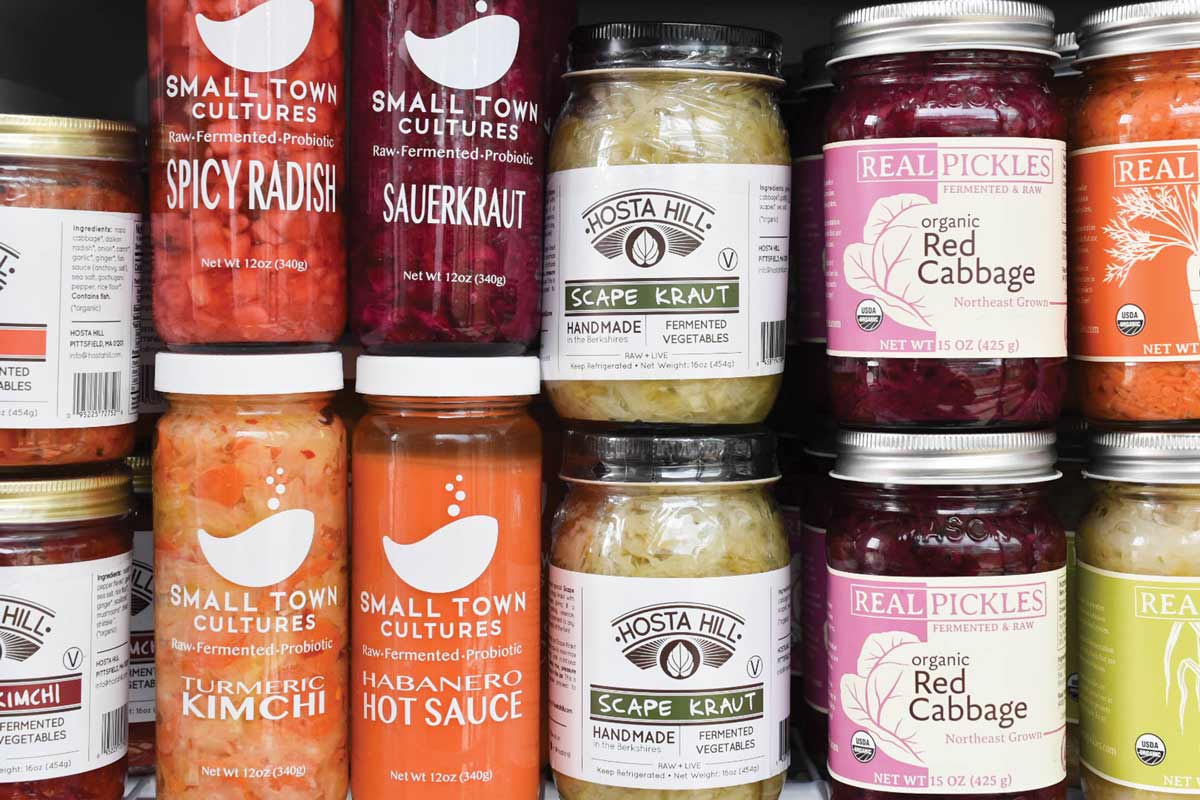 Among Maine-made products at Onggi are Hosta Hill scape sauerkraut, from Pittsfield.

Kimchi and other fermented foods were simply a part of growing up for Marcus Im, whose parents and grandparents immigrated to the U.S. from South Korea. “Back then, I didn’t know what was fermented and what wasn’t,” Im says, “but my parents always tell me it was so bizarre to see a little kid scarfing down something like fermented raw crab. Usually, it’d be the adults eating that stuff, but I guess I was a little odd.”

This spring, Im, Amy Ng, and Erin Zobitz teamed up to open Onggi, a fermentation-focused market in Portland, housed in a shipping container turned retail incubator in Washington Avenue’s Black Box development. The shelves up front display canned fermented foods, plus some home fermentation tools. Among the former, there’s miso (fermented soy beans) from Go-en Fermented Foods, in Whitefield, there’s wild-blueberry vinegar from West Maquoit Vinegar Works, in Brunswick, and there are fermented hot sauces from Resurgam, in Portland.

Most of the food comes from Maine producers, although Im and his partners have to go elsewhere for certain things, like Japanese-style natto. Usually, natto is frozen and imported from Japan, but Onggi buys it fresh from a small producer in New York. Im says it’s one of the more unusual — and divisive — offerings, made with soy beans fermented with a specific set of microbes. “Slimy is probably the wrong word — but it’s slimy,” Im says. “No one just likes natto. You either love it or absolutely hate it. I actually grew up eating it all the time. My grandma basically force-fed it to me, and I hated it. But now I’m completely obsessed with it.”

Fermentation wares for sale at the shop include beer- and cheese-making kits, glass Kilner jars, fermenting weights, and butter churners. From Pottery Farm, in Knox, Onggi stocks earthen fermentation crocks, and Im says one of the surest ways for home cooks to step up their fermentation game is to switch from using glass to ceramics, in order to get new depths of flavor. The shop’s namesake is a specific type of Korean pot that has been used for fermentation for many millennia. Im could only find one U.S.-based maker, a potter in Montana, and now Onggi is one of just two retailers in the country to stock his work.

The back of the shop has a café counter that serves up coffee and tea, plus a fermented drink, shrub, a fruity, sparkling drinking-vinegar that Onggi gets from Herbal Revolution, in Union. For a sweet snack, there are sourdough chocolate-chip cookies — adding starter to the cookie dough lends a subtle tang that balances against the chocolate. And on the savory side, Im makes kimchi that he then bakes into hand pies, a sort of fusion-y variation on a New England farm-stand classic.

Lately, Im has also started hosting free fermentation classes — over Zoom initially, although he wants to hold them in person eventually. It’s an opportunity to preach the virtues of fermentation. “Our philosophy of fermentation is that you really don’t need that much to try it,” he says. “The simplest ferment is sauerkraut — just take cabbage and salt and stuff it in a jar and see what happens in a year. We really focus on how fermented foods can be used in everyday things. I mean, you might have never thought of using sourdough in a cookie or kimchi in a pie, right?”