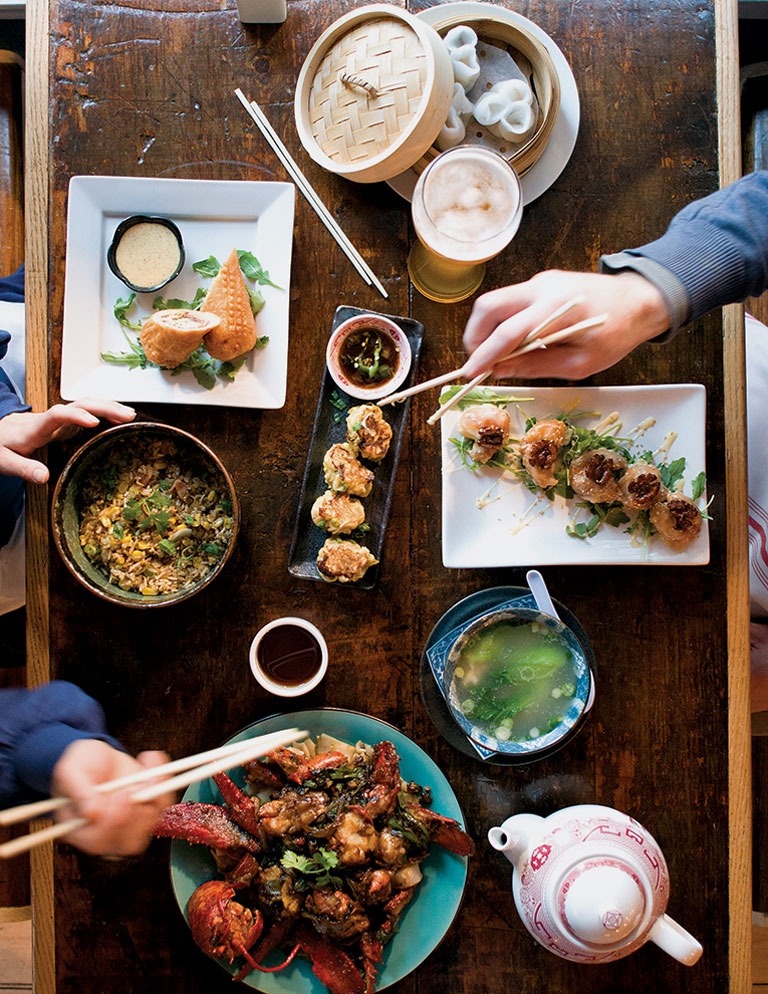 [L]ive in a city long enough and your perception of its streets becomes a fusion of past and present. A  new shop opens in a one-time watering hole that was formerly a bakery that was once a five-and-dime. Each new incarnation builds upon the past, sometimes leaving a glimpse of history — a bit of molding, the arch of a doorway — reminding us that the present adds yet another layer on what came before.

Which is exactly what can be said for Empire Chinese Kitchen, Maine’s first dim sum restaurant, located in the heart of Portland’s downtown on Congress Street. This relative newcomer on the Portland dining scene is housed in what was formerly a dine-and-dance club, a dive bar, a bank, and, if you dig back far enough, Portland’s first “deluxe” Chinese restaurant, Empire Chop Suey (1916–1953), which offered formal table service and starched linens.

While Empire Chinese is anything but formal, it gets the combination of classic Cantonese and updated innovation just right. Owners Theresa Chan and Todd Bernard chalk up their almost immediate success to happy serendipity. Despite their backgrounds — Chan grew up in the business, her family opened China Rose and Little Tokyo in Brunswick; Bernard was one of the original founders of Portland’s Space Gallery and a former advertising sales representative at Down East — neither partner was looking to open a business. But through a series of conversations as they commuted by ferry to work on Great Diamond Island, the idea blossomed. Next thing they knew, a lease was signed and they were up to their eyebrows in demolition. The pair, with the help of friends and family, did all the design and renovations. The result is part industrial (exposed I-beam, HV ductwork, and plumbing pipe as ornamentation), part stylish (lots of natural daylight and blond wood, an intimate horseshoe bar with a pagoda-like bar back rising behind it), and part whimsical (rows of potted hanging jade plants dividing booths, an illuminated “disco Buddha” behind the bar). There are corners and crannies for the solo diner or canoodling couples, but large parties with children are equally at home. Call the atmosphere feng shui with funk.

The real mix of past and present, however, is what goes on behind the kitchen door. The partners began by recruiting a dim sum chef from San Francisco with 40 years of experience. “Dim sum is an art,” says Chan, referring to Empire’s style of dining, which features small plates such as steamed buns and dumplings. But she quickly adds that the same goes for the stir-fry chef. “You have a nine-second window to get that piece of protein perfect.” And did they go to San Francisco to recruit the wok chef? She demurs for a moment. “Actually, it’s my dad.”

The focus is on fresh and local as much as possible. There’s even kale on the menu, served braised over rice noodles. Chan says she got some looks from the kitchen when she plopped down a bundle and said, “We have to do something with this!” She smiles. “But it was so beautiful. I really wanted to offer it.”

“Dim sum is an art,” says Chan, but she quickly adds that the same goes for the stir-fry chef. “You have a nine-second window to get that piece of protein perfect.”

The menu is broken out into three reasonably priced categories: small plates, dim sum (nothing costs more than $10 on either), and large plates (nothing more than $20). The ideal way to experience this kind of food, according to Bernard, is to gather with friends and family, order broadly, let the dishes come as they may, and sample around the table. Should you not have a crowd at your behest, bring an enthusiastic appetite and let the courses begin.

Wok-fried dumplings arrive with dipping sauce on a rectangular pottery platter; batter-fried honey walnut shrimp with citrusy yuzu mayo soon follow. There may be a brief scramble to see who can liberate their chopsticks from their paper liner first, and then the frenzy begins. What next? Perhaps one of the Cantonese classics: wonton soup or delicate steamed char sui (pork buns). An order of the heavenly baby bok choi simply tossed in the wok with a little garlic, ginger, and oyster sauce will make you never look at a green vegetable the same way again. Same with the garlic green beans. “Parents come up and thank me,” said Chan. “Kids devour them like candy.” There’s even a kooky twist on an old favorite: Empire’s super-crunchy eggroll is stuffed with pastrami, cabbage, and asparagus and served with honey mustard — Chinatown meets the Borscht Belt. (Dessert can take an unexpected turn, as well, with an Eastern twist on a cannoli via a fried egg roll dough filled with chocolate.)

If you haven’t fully gorged on starters, move on to one of the large plates for added drama. The Lobster Longevity Noodles in tequila sauce is a sliced lobster that is wok fried with ginger and scallion and then put back together and served on a bed of wide noodles. Or try the flounder filet. Chunks of fried fish are presented in an edible bowl formed by frying the fish’s skeleton, which has been dredged in egg batter and stretched over a frame. It looks like something you might find washed up on a beach.

But that’s just one more example of a playful take on a classic presentation that distinguishes Empire Chinese, where past and present happily share space.