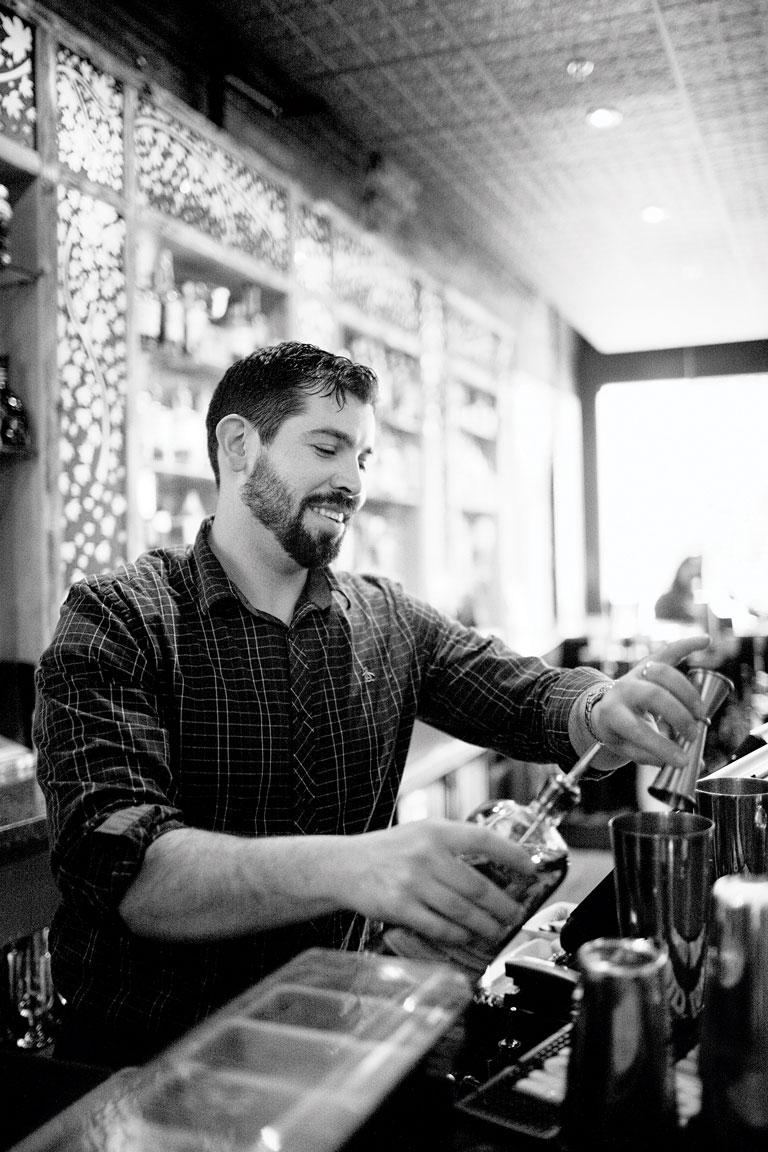 [W]hen the beloved Whig & Courier shut its doors in 2010, many in Bangor were concerned about the future of the property, which occupies a prime downtown location on West Market Square. Turns out, the restaurant that took the Whig’s place tends to cause local amnesia: with its wood-fired kitchen, modern rustic interior, and bold bar, Blaze makes people forget that it was once home to their favorite New England pub.

Blaze is part of a Bangor renaissance that has seen new businesses open in once-vacant storefronts, a farmers market take root at Abbott Square, and an ambitious concert series rapidly become one of New England’s best. “Eight years ago, I wouldn’t have ever considered opening a restaurant in downtown Bangor,” says Blaze owner and Queen City native Matt Haskell. “But people have really rallied around the revitalization of downtown.” With encouragement from the Bangor City Council, Haskell, who also owns two seasonal restaurants in Bar Harbor, plunged in.

It took more than a year to renovate the 134-year-old building and bring it up to code. Designed by Ervin Architecture, Blaze is warm and inviting, with both original brick walls and horizontal blond wood paneling cut from centuries-old timber plucked from the bottom of a Penobscot River tributary by Millinocket’s Maine Heritage Timber — a fitting material for a historic building in the former lumber capital of the world. The bar also is constructed of reclaimed river wood, but its most striking feature is a softly illuminated red wall panel with a stenciled floral design.

But it’s the adventurous yet accessible food that accounts for the brisk business that Blaze has enjoyed since its much-anticipated opening 15 months ago. Things have gone so well, in fact, that the restaurant is already expanding: this summer, Blaze will introduce a raw bar and space for private parties on the second floor, as well as patio seating on the newly renovated West Market Square.

A wood-fired brick oven helps distinguish Blaze among Bangor’s increasingly sophisticated dining options. It lends a deep, smoky flavor and aroma to about 80 percent of Blaze’s menu, everything from pizza and burgers to oysters and duck. “You can go anywhere and get something cooked over a gas grill,” says chef de cuisine Mike Hamele, whose credentials include California’s The French Laundry, New York City’s Per Se, and, closer to home, Lewiston’s Fuel. “This is definitely a more primal way to cook.” Head chef Justin Bard got his education in wood-fire cooking at Ricetta’s, one of southern Maine’s original brick-oven pizzerias.

The oven requires special attention in order to maintain cooking temperatures upwards of 800 degrees. “We keep it hot all the time,” says general manager Jake Bridges. “If the fire goes out overnight, it takes forever for it to get hot.” The restaurant burns about a cord of firewood a week — primarily red oak, but occasionally cherry or apple, each of which lends its own distinctive flavor to the dishes.

The menu, which relies heavily on locally harvested and produced ingredients, is a team effort. “This place is really a culinary playground,” Bridges says. Offerings are plentiful and diverse, making Blaze a great place to feast with friends with varying tastes and appetites. In the mood for pub fare? Consider the Blaze Burger, which comes with smoked mozzarella, bacon, and caramelized onions, all topped with a fried duck egg, or the fig and ricotta pizza, whose natural sweetness is offset by salty bits of prosciutto and oniony scallions. Looking for something a bit more elaborate? Try the creamy scallop and Maine crab risotto or the oak-grilled duck breast served in a bourbon-soaked cherry reduction. Even the salads get a taste of the wood fire, with toppings like smoked salmon, roasted beets, and pork belly. The duck-fat french fries, hard to find north of Greater Portland, are a customer favorite. Topped with cheddar cheese curds and duck gravy, they make for a finger-licking twist on classic Quebecois poutine. The serving is big enough to share — but you might not want to.

With 51 beers on tap and a dizzying array of craft meads, ciders, and craft cocktails, the bar offerings are as comprehensive as the menu. But nothing here is intimidating, thanks to Blaze’s relaxed atmosphere and Bridges’ expertise and friendly manner. “We want people to feel welcome,” he says. “We’re not pretentious — we’re designed for everyone to enjoy.”