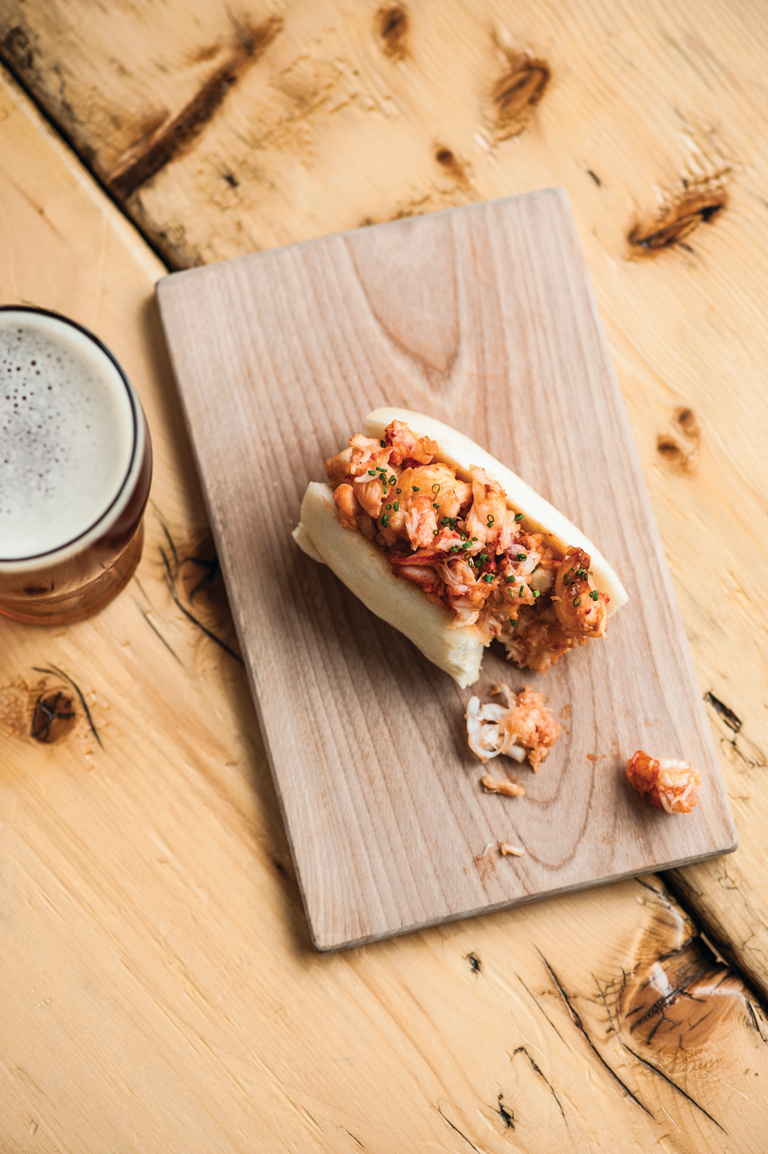 Snack on creton at the Canadian border. Gift a box of island chocolate. Eat a tempura-fried whoopie pie.

Best Overlooked Doughnut
Edna and Lucy’s
Lost in the discussion over the best doughnuts in Maine (which usually centers around Frosty’s in Brunswick, Willow Bake Shoppe in Rockport, as well as both Tony’s and The Holy Donut in Portland) is Edna and Lucy’s in Pownal. These dense and moist yeast doughnuts, baked fresh daily, are kept simple — the owners offer only plain or cinnamon sugar. Act quickly though. These sell out fast. 407 Hallowell Rd., Pownal. 207-688-3029.

Best Edible Gift
Black Dinah Chocolates
What started as a mild craving one winter for chocolate truffles has turned into one of the great Maine success stories. Black Dinah chocolates, made by Kate Shaffer on the remote island of Isle au Haut, are now available to order online and make the perfect gift for those who overlap in the Venn diagram of people who love chocolate and people who love Maine. And we’re betting you know a few of those. 1 Moore’s Harbor Rd., Isle au Haut. 207-335-5010. blackdinahchocolatiers.com

Best Late-Night Deal
Boda
Walk around Portland past 10 p.m. on Sunday and you’ll experience a city in slumber, resting for the upcoming workweek. That, or everyone is at Boda. From 9:30 p.m. until closing every Sunday, this Thai restaurant in Longfellow Square offers half off its late-night menu. With a packed house until late, Boda has become the go-to spot for Portlanders seeking both the city’s best Thai tapas and a good reason not to let the weekend come to a close. 671 Congress St., Portland. 207-347-7557. bodamaine.com

Best Prix Fixe Deal
Trattoria Athena
Over the past few years, Brunswick’s Greek-Italian restaurant, Trattoria Athena, has quietly earned its place as one of the best restaurants between Portland and Rockland. If you haven’t experienced this international cuisine made up of local ingredients, be sure to stop by on a Sunday for the $30 four-course prix fixe special. Add just $5 and receive all you can drink house wine — a deal that Greeks, Italians, and Mainers can agree on. 25 Mill St., Brunswick. 207-721-0700. trattoriaathena.com

Best Ice Cream with a Cause
Dorman’s Dairy Dream
Dorman’s Dairy Dream deserves to be considered amongst Maine’s best if only for its homemade ice cream and Down East Sundae Shake — a thick milkshake topped by a soft serve hot fudge sundae. Even more impressive, though, is Dorman’s commitment to raising money for the Maine Children’s Cancer Program (last year they reached $10,243), as well its as refusal to sell the small shack so that Walmart could create a Route 1 entrance for its new supercenter. It’s those kind of values we hope never leave Maine’s coastal route. 189 New County Rd., Thomaston.  207-390-0121.

Best Pan Asian
Long Grain
If we actually crunched the numbers, the percentage of each Down East editorial paycheck that goes directly towards take-out from Camden’s three-year-old Thai restaurant, Long Grain, would make us lose our appetite. Which is exactly why we haven’t bothered. It’s not just our staff who knows the secret of this reasonably priced and locally sourced Asian food. Its Khao Soi (Chiang Mai curry) was featured recently on the cover of Bon Appetit magazine and the restaurant received a rave review from the New York Times. 31 Elm St., Camden. 207-236-9001.

Best New Cocktail Bar
The North Point
Over the past few years, mixologist-created cocktails have become ubiquitous at restaurants across the state. While it’s hard to definitively say The North Point’s infusions rank above all others (though they are delicious. Try the Maine Wild Blueberry for something unique), this bar in the Old Port is one of the few to nail down the right ambiance for a cocktail/wine bar. It’s intimate, dimly lit, and comfortable without being pretentious — exactly what you want when sipping on a classic old-fashioned. 35 Silver St., Portland. 207-899-3778. northpointportland.com

Best Acadian Fare
Dolly’s restaurant
The Saint John Valley has a distinctive culture rooted in its Acadian heritage and its proximity to the Canadian border. Not only do many of the locals speak French, but they also serve the cuisine of their ancestors: ployes (a pancake-like flatbread made with buckwheat), creton (pork spread), and chicken stew. You’ll find all three expertly prepared at Dolly’s. The ployes are made to order and served piping hot. Add a little butter and they go perfectly with that hearty chicken stew, a soulful, rib-sticking blend of chicken, potatoes, and dumplings. Don’t leave without sampling the savory creton, which is rich and wonderfully full of flavor. 17 U.S. Rte. 1, Frenchville. 207-728-7050.

Best Sporting Camp for Foodies
Libby Camps
Making the trek to Libby Camps on Millinocket Lake (the northern one) is a long haul. But the appetite you’ll build up in getting there will serve you well. This century-old sporting camp offers some of the best food you can find in the Maine woods. Whether it’s the hearty grilled cheese sandwich on thick homemade bread or the deliciously sweet baked beans or a slice of berry pie, the from-scratch food coming out of Jessica Libby’s friendly kitchen never fails to please — and fuel you up for snowmobiling, canoeing, cross-country skiing, fishing, or one of the many other activities at your fingertips. Millinocket Lake. 207-435-8274. libbycamps.com

Best Upscale Lobster Roll
Eventide Oyster Co.
We’d never dare suggest that a lobster roll like Eventide’s that deviates so far from tradition by using brown butter vinaigrette and a steamed bun could be the best in Maine… right? Suddenly, we aren’t so sure. For the first time, we’re reconsidering the axiom that simpler is better when it comes to Maine’s favorite sandwich. You can also try it with hollandaise or house mayo instead of brown butter vinaigrette. 86 Middle St., Portland. 207-774-8538. eventideoysterco.com

Best Over-the-Top Whoopie Pie
Muddy Rudder
We Mainers sure do love our whoopie pies — so much so that we’ll go to great distances to search for the very best. A true aficionado can’t rest until sampling the Muddy Rudder’s $5 deep-fried version that has been a pillar of the dessert menu since the restaurant reopened under new ownership in June 2011. The traditional whoopie pie itself comes from Wicked Whoopies in Freeport. It’s then coated in a sweet, homemade tempura batter and fried to golden deliciousness. As if that isn’t enough, it’s topped with milk chocolate sauce and a scoop of vanilla ice cream from Toot’s in North Yarmouth. Decadent? For sure. But somehow it’s surprisingly easy for one person to eat it all. 1335 U.S. Rte. 1, Yarmouth. 207-846-3082. muddy-rudder.com

Best Local Food  and Wine Pairing
Oyster River winegrowers, Uproot Pie Co., and Stone Fox farm creamery
Weekday nights in the summer stretch long into the evening, and a great place to pass the time while indulging in local cuisine is at Oyster River Winegrowers in Warren. On the first and third Wednesdays of the month, dozens of people gather to explore the 57-acre horse-powered farm, listen to local musicians in the rustic barn, enjoy glasses of the winery’s offerings (we love the Villager White), eat the area’s most delicious pizza from the mobile Uproot Pie Co. of Union, and top it all off with a scoop of Stone Fox ice cream of Monroe. Kids are welcome, too — and pizza and ice cream is just fine by them! 929 Oyster River Rd., Warren. 207-273-2998.

Best Personal Food Blog
From Away
After spending years abroad in a fishing village in Mexico, Malcolm and Jillian Bedell came to Maine and took to the blog-o-sphere starting in 2010 to share their food experiences as they explored the state. Their blog From Away: Cooking and Eating in Maine is  the right mix of useful lists, thoughtful reviews, original recipes, humorous observations, and fantastic photography (the undoing of many food blogs). Impressively, the blog is updated every weekday. For a more tangible collection of the Bedells’ food musings, keep an eye out for their debut cookbook slated to hit bookstore shelves this October. fromaway.com.

Best Surprising Soda
Merlot Soda de Vine
Be careful when offering your wine-snob friends some Merlot soda from Blacksmith’s Winery in South Casco. We’re sure they’ll enjoy it, but the idea of wine being debased into a carbonated beverage will turn a pretentious few away. Make sure to offer it as a new kind of soft drink that’s made in Maine. Once they say “Delicious!” there’s no turning back — they’ll have to try the Riesling edition as well. Add blueberry ice cream to the Reisling or chocolate ice cream to the Merlot for a unique Soda de Vine float.The winery is located at 302 Quaker Ridge Rd., South Casco. 207-655-3292. blacksmithswinery.com

Best New Kind of Buzz
Maine’s microbreweries and specialty coffee roasters have been rising in quality and quantity on parallel tracks over the past few years. That they should eventually overlap seemed inevitable. Three of the state’s best roasters teamed up with three of the best brewers to collaborate on libations that give you two types of buzz. Be on the lookout across a rotating cast of bars and restaurants for these limited edition collaborations: James Bean (Allagash Brewing Company and Matt’s Wood Roasted Organic Coffee), Tempest Coffee Porter (Rising Tide Brewing Company and Bard Coffee), and Coffee IPA (Bunker Brewing Co. and Tandem Coffee Roasters).

Four spots to grab a drink, order a meal, and enjoy the breeze.

The Waterfront Restaurant
Down East readers voted Camden as having the state’s best harbor. Aside from chartering a boat, there’s no better way to experience this picturesque scene than just feet above the water on the deck of The Waterfront. 48 Bayview St., Camden. 207-236-3747. waterfrontcamden.com

Three Tides
At Three Tides it’s choose your own patio adventure: Sit upstairs and be served cocktails and entrées while overlooking Belfast Bay, or head to the downstairs biergarten with a pint of Marshall Wharf and play bocce immersed in the city’s hipster scene. 2 Pinchy Ln., Belfast. 207-338-1707. 3tides.com

Black Point Inn
Grab a spot on the deck of the  Black Point Inn, the historic inn on beautiful Prouts Neck, and watch the scene unfold as the sun sets over Ferry and Old Orchard  beaches down below.  510 Black Point Rd., Scarborough. 207-883-2500.  blackpointinn.com

Best Raw
A mainstay of Miyake’s menu since it was a BYOB hole-in-the-wall on the West End, raw lobster is ever-so-lightly poached, dressed in olive oil and garlic, and offered as nigiri or sashimi. 468 Fore St., Portland.  207-871-9170. miyakerestaurants.com