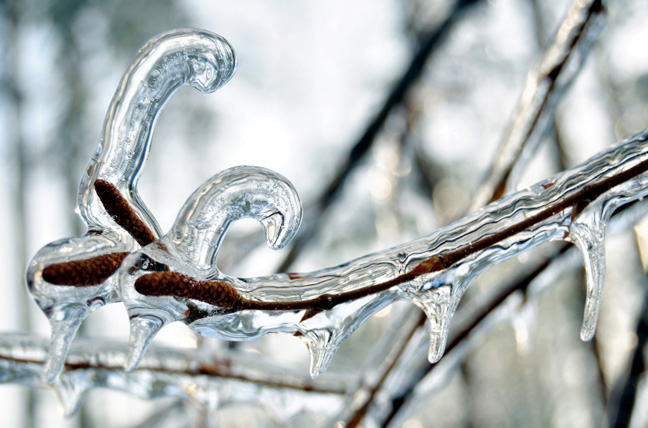 In Maine, storms make a music that rivals the classical masters.

For city dwellers, winter is the season of symphonies, operas, and a great deal of fine indoor music. But in rural Maine, I’ve found the most engaging music of midwinter comes less from man-made sources and more from whatever Old Man Winter serves up between December and the end of March.

Ice storms are rarely accompanied by significant wind. Instead, as the freezing rain begins to accumulate on roads, tree branches, and power lines, there is an eerie patter and drip behind the everyday sounds of a midwinter home. Then, inevitably, the ice storm brings a widespread power outage, which silences all man-made sounds. Until you go outside.

At first, the ice storm sounds to me like Tchaikovsky’s 1812 Overture, complete with booming cannons that characterize the Russian composer’s most famous work. But in our woods, it is not the symphonic sound of Napoleon in retreat. Instead, it is the crack of big tree limbs, mostly white pine, being broken off the tree’s main trunk under the weight of clinging ice. These sounds are distinctly like heavy-gauge gunshots and, if a whole tree is snapped off, almost identical to the boom of a small cannon.

Then, if I listen closely, the carillon bells of the Overture’s coda can be distinctly heard — albeit less prominently, and with more imagination applied. The “bells” in our woods are giant sheets of ice falling from trees onto the hardened ground, making a distinct tinkling noise as they shatter. For hours, there is ringing throughout the woods as if celebrants are cheering a victory of the natural world rather than the Russians over the French.

Another meteorological manifestation of music comes at the beginning of Maine’s famed nor’easter season. Early in the winter — and sometimes all winter — our white oaks and some of the reds retain their leaves long after autumn has passed. Then when the first nor’easter’s characteristically granular snowflakes hit those leaves, it creates a hissing sound that rises and falls with the intensity of the snowfall. The nor’easter’s slowly rising wind also creates a distinct, low moaning sound in our eighty-five-foot pines. Like the hissing, the pines’ chorus is hauntingly mortal until collecting snow silences both sound sources.

Taken together, the sibilant hiss on dry leaves and the soughing amid pine needles puts me in the mind of a Gregorian chant, creating a sort of sylvan vespers for this time of the year.

My fanciful eighth-century choral ideas are probably helped along by the gray, numbing cold, which characterized the Dark Ages of Saint Gregory’s papacy. Any human voice singing in the midst of an awful snowstorm must have been comforting. I know our trees’ voices are to me.

Of course, composers and musicians have been finding music in the sounds of nature for centuries. It’s easy enough to take a midwinter walk on the nearby beach of Reid State Park and hear the inspiration for something like Wagner’s Flying Dutchman Overture.

And Vivaldi tried to package up all the seasons’ music in his violin concertos. Indeed, it’s difficult to troll through the radio this season and not hear the “Winter” portion of that masterpiece at least once. It sounds as though the eighteenth-century Venetian’s January was almost as challenging as a twenty-first century Maine winter.

But the winter music most Mainers wait for and smile at when they hear it has never been recreated in sharps, flats, or whole notes. Usually on one day in midwinter, we wake up to a bright sun and temperatures wandering around the high forties. The sound such a thaw creates is that of flowing water: cascading off trees or the roof or clanging in a downspout. In its simplicity, it’s the sound of hope.

This brief allegro lasts only a day or so. And it may only bubble or gurgle, without any discernible harmony or melody. But we all know its cheerful sound implies spring cannot be too far off.

Then the sun disappears again, the freeze resumes, and silence moves back in. But we’ve all heard the reminder of winter’s finest music. And we wait patiently to hear it again in a rising symphony of returning birds, awakening animals, and a new season.