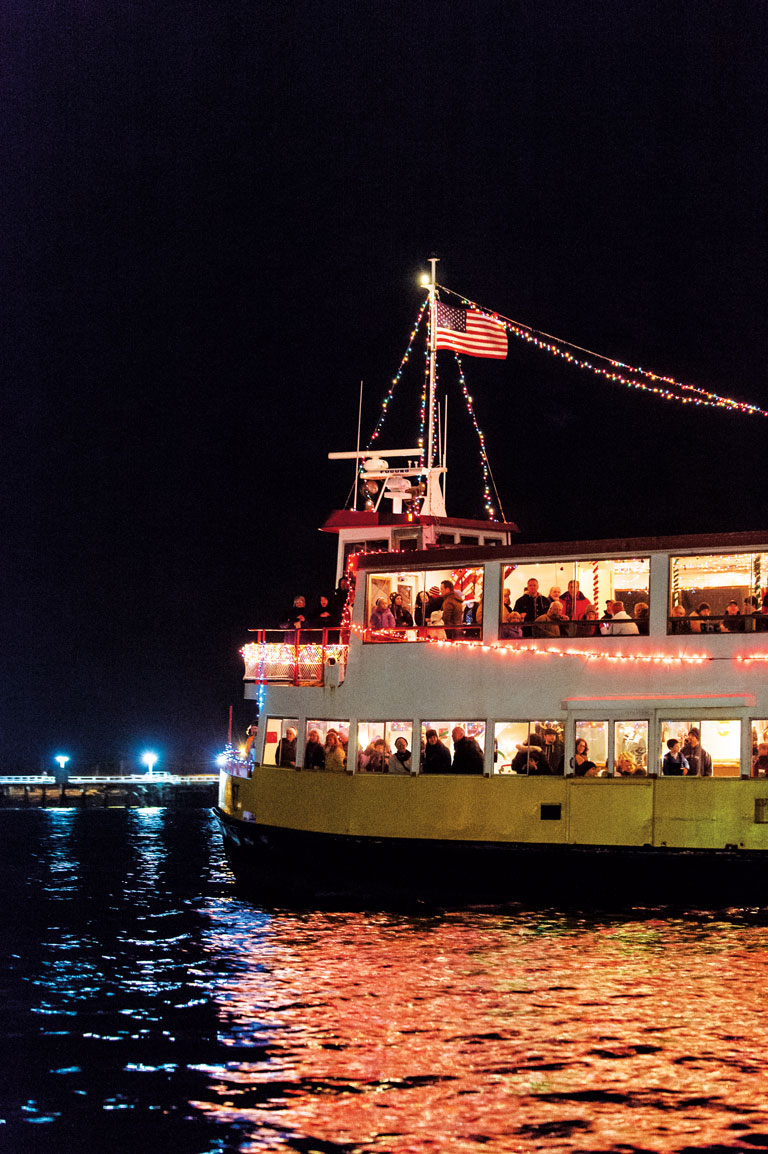 You won’t need to look hard to find Santa during this year’s Portland Harbor Christmas Boat Parade of Lights. In fact, you’ll probably see him many times over, smiling and waving from a dazzling procession of yachts, sailboats, tugboats, and dinghies as they glide by the city’s waterfront. But as this Christmas tradition celebrates its 14th birthday, one thing remains certain: there’s only one Mrs. Claus.

During the rest of the year, she’s better known as Chris Kean, a Portland resident who founded the parade back in 2001. But when the big night rolls around each December, she transforms into the all-important lady in red.

“We don’t really have titles,” Kean says, “but everybody knows me as Mrs. Claus out there.”

There is no better designation for the woman who transformed a wisp of an idea into Portland’s flashiest holiday event. The parade started as an offhand suggestion while Kean and friends chatted on the deck of her boat. Kean took the concept and started organizing, and before she knew it, Casco Bay Lines had stepped into the picture, providing ferries for spectators and offering to donate its ticket revenue to a local charity (after some early switches, Casco Bay Lines settled on SailMaine, an organization that provides sailing scholarships to Portland-area youth). On the night of the first parade, 32 boats cruised the harbor and a tradition was born.

And that’s the best thing about the holiday season — it’s the time of year when, no matter our age, we’re encouraged to seek out moments of magic, to believe in the incredible.

“We’ve had one every year since,” Kean says proudly. “Although we’ve had a few years where we were down around the 15- or 17-boat level, those were usually on very cold nights. But we’ve had as many as 37. And some years, Casco Bay Lines put two boats out there.”

Spectators can also take in the parade at plenty of waterfront spots: harbor-view restaurants host parties, private groups rent spaces overlooking the water, and hundreds of onlookers brave the cold to watch from DiMillo’s Marina and the Maine State Pier. Luckily, the fireworks finale looks enchanting no matter where you’re standing.

“It’s just amazing how beautiful all the boats look, and then you put it with the reflection in the water,” Kean says, pausing as if to conjure the twinkling array of colors in her mind. “The lights are just incredible.”

And that’s the best thing about the holiday season — it’s the time of year when, no matter our age, we’re encouraged to seek out moments of magic, to believe in the incredible. Maybe that snowman really did wink his coal eye. Maybe that rustling on the roof really is the stamping of reindeer. And maybe the many Santas in Portland Harbor aren’t just boat captains wearing pearly-white synthetic beards — maybe they’re some uncanny incarnation of the jolly old man himself, come to the coast of Maine on an icy night to deliver the Christmassy warmth we wait for all year long.

The Portland Harbor Christmas Boat Parade of Lights sets sail on December 13 at 4:45 p.m. Watch from the Portland waterfront or ride along with the Casco Bay Lines ferries. Ferries depart from 56 Commercial Street at 4:30 p.m. Adults, $10; children under 5, free. 207-774-7871. cascobaylines.com