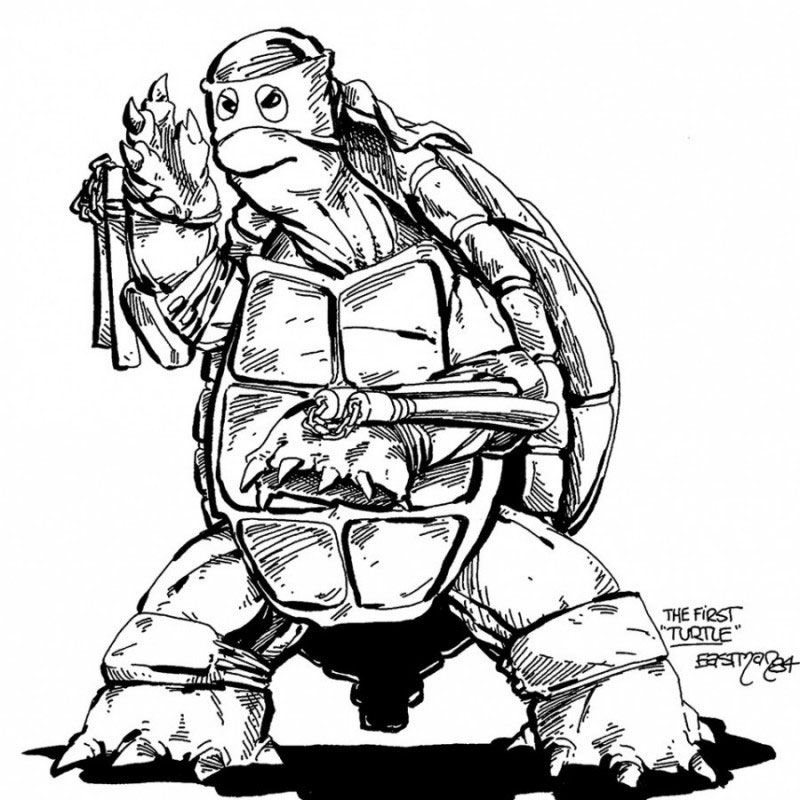 Who knew the “heroes in a half shell” got their start among the soft shells?

The Teenage Mutant Ninja Turtles turned 30 this year, and the comic-book-turned-multimedia-super-franchise is still kicking shell with a big-budget action flick, a comic-book reboot, and a popular Nickelodeon cartoon (with a star-studded voice cast). No one’s more tickled than Turtles co-creator and native Mainer Kevin Eastman, who grew up in the tiny Buxton village of Groveville. These days, Eastman lives in San Diego, but we asked the writer and illustrator how his Maine upbringing gave rise to Turtle Power.

It was a great place for a kid with a big imagination. We played a lot in the woods and fields. My grandparents had a camp on Bonny Eagle Pond, and on one of the lake run-offs there were always spotted turtles and a few snapping turtles that we tended to taunt with sticks.

Where did you get exposed to comics?

I had a paper route delivering the Portland Press Herald, and when I got paid, I’d ride my bicycle down to the Gorham Stop & Go. They sold comic books, so I’d buy as many as I could and still have money leftover for a Yoo-hoo and a Twinkie.

You didn’t head to Portland for a wider selection?

There was no such thing as comic book stores like there are today. I got half of my comics from the Stop & Go and the rest from the Salvation Army. Occasionally, some poor soul lost all his comic books to his mother dropping them off there, and I could scoop them up at 5 cents apiece.

Was a career in comics something people took seriously?

My art teacher at Westbrook High School, Rebecca Jane Hawkes, was one of the few people who didn’t laugh. She said, “It seems to me that if you want to draw comic books, then you have to be able to draw just about everything.” So she gave me a lot of extra assignments.

When did the idea for the Turtles materialize?

I went to Portland School of Art [now Maine College of Art] and the University of Southern Maine, but I just couldn’t afford to stay in school. So I spent four or five summers working at Johnny’s Oarweed in Ogunquit, cooking lobsters and saving enough to make it through winter. On my breaks, I’d sketch the buildings and boats around Perkins Cove, stuff I thought tourists might buy. In fall 1983, I met [Turtles co-creator] Peter Laird, who had a room to rent in Dover, so we decided we’d team up and form a little studio. One day I did a little sketch I thought was the dumbest thing on the planet, this ninja turtle with a mask on and nunchucks in his arms. I put it on his desk and said, “Ha ha, it’s the next big thing.” We were basically laughing ourselves silly.

So it all goes back to Ogunquit — a turtle empire built on lobster money?

What’s cool is I got married in Ogunquit last October, and we had the reception right there at the Oarweed.