An exhibition at the Portland Museum of Art tries to rehab the painter’s artistic legacy while critiquing his cultural biases. 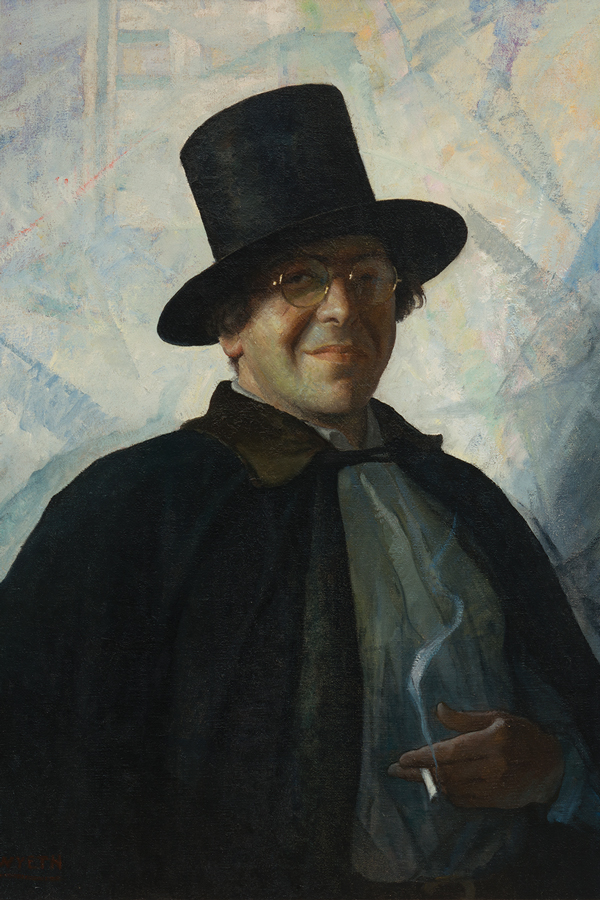 The Portland Museum of Art wants you to know that N.C. Wyeth is not who you think he is — assuming you think about him much at all. In the early 20th century, Wyeth gave figure and form to the imaginations of generations of young readers with his magnificent illustrations for such books as Treasure Island, The Last of the Mohicans, Robin Hood, and Robinson Crusoe. Now, a PMA exhibition, put together in conjunction with Pennsylvania’s Brandywine River Museum of Art, asks viewers to appreciate Wyeth’s achievements not just as an illustrator but as a fine artist.

Newell Converse Wyeth was born in Needham, Massachusetts, in 1882. He studied illustration at the Howard Pyle School of Illustration Art, in Chadds Ford, the Pennsylvania town that became one pole of Wyeth World. The other was Port Clyde, on the Maine coast. And as patriarch of the first family of Maine art, Wyeth passed this aesthetic domain along to son Andrew and grandson Jamie.

Despite his commercial success, the eldest Wyeth always felt slighted, sensing that his work as an illustrator diminished his standing among critics and fellow artists. The PMA exhibition, N.C. Wyeth: New Perspectives, draws on various museum and private collections to offer as complete a showing of his works as has been assembled in decades, aiming to demonstrate the versatility of an artist whose style clashed with prevailing trends.

Wyeth seemed to sum up his own unease with the modernist milieu of his time in Self-Portrait in Top Hat and Cape, using a prismatic cubist design as a decorative background to a romantic costume-drama version of himself. Still, it’s the familiar, folksier favorites that best show off his artistic chops — Island Funeral, Dark Harbor Fishermen, and Bright and Fair, the latter a painting of the Wyeths’ home in Port Clyde. While he can imbue landscapes and interiors with brushy domesticity, he’s a master of theatrical, muscular realism, depicting exciting scenes with a sure hand and a keen sense of energy.

A separate aim of the exhibition is to scrutinize the cultural biases of Wyeth’s day as manifested in his works. To accomplish that, curators invited a racially diverse group of Mainers to offer critiques, printed on labels next to the paintings. (These were not included when the exhibition debuted earlier this year at the Brandywine.) Penobscot tribe member Dawn Neptune Adams observes of The Harbor at Herring Gut, a fanciful working-waterfront scene, “There is no trace of indigenous people here. It was reimagined in white supremacy.” Daniel Minter, an African-American artist from Portland, looks at Dark Harbor Fishermen and sees an image of vigorous-looking white men that is “self-destructive . . . because the ideas are detrimental to you if you are a Black person or a woman.”

At least one prominent art critic has asked whether, while trying to give Wyeth a fair shake on artistic merit, the museum gives him an unfair shake on cultural politics. In the exhibition catalog, PMA curator Jessica May writes, “The world of family, friends, and characters that fill Wyeth’s paintings is almost exclusively the province of white Americans, suggesting a bias in perspective.” This prompted critic Edward Rothstein to opine in the Wall Street Journal, “We might as well condemn all artists of the Western tradition — and every other — for not satisfying current preoccupations with statistical representation.”

“I’m surprised we haven’t had more people criticizing us,” May says. But she thinks that objection misses the point. “To rob people of the N.C. Wyeth they love was not the goal at all,” she says, calling New Perspectives “an exhibition of a man who deserves a great deal of respect.” Offering contemporary views from a diverse group of critics, she argues, “just deepens the narrative.”

Viewers will differ on whether the show succeeds as a reevaluation of Wyeth, on artistic or cultural merits. But regardless, the artist’s works remain enormously entertaining, and that’s reason enough to give them another look.