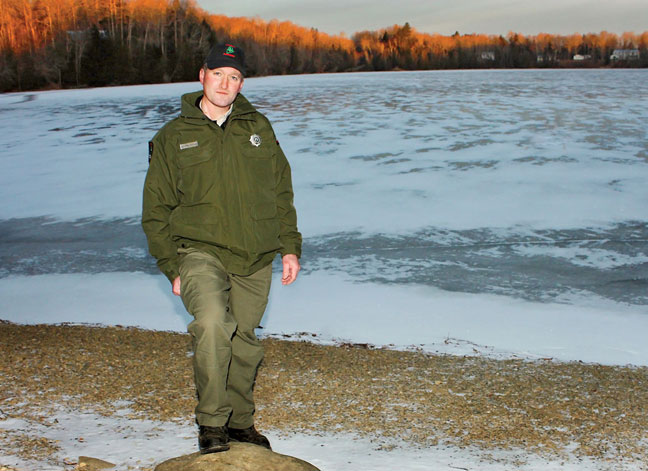 Public jobs account for a hefty share of the Maine workforce, and the Public Administration sector supports 27,779 jobs, many of which are protective service occupations — including police officers, prison guards, and firefighters.

Jeremiah Crockett is one of fifty-six forest rangers employed by Maine’s Forest Protection Division to guard private lands, enforce timber harvesting regulations, and fight forest fires. At age thirty-seven, he is one of Maine’s most experienced firefighters. He patrols 350,000 acres, oversees thirty firefighters, and is based in Houlton.

“I’ve lived here my whole life, grew up in the Moosehead Lake region. My father was a forest ranger before me and that perhaps allowed me to do what I did at a younger age.

“I fought my first fire when I was about twelve, on Ragged Mountain near Willimantic. I came in at the later stages of that fire after it was controlled and started working on what’s called mop-up, which is actually digging the smoldering fire from the ground and dousing it with water and packing up the equipment and bringing it back to the office. I really got my first taste of what it’s like to have the smoke in the air and work a long day on tough terrain and in tough conditions, and I enjoyed it, getting dirty and being out there and feeling like you were accomplishing something and protecting private land.

“Back when I was in high school, I fought about the largest fire I’ve ever fought in the state of Maine. It was about a little over a three-thousand-acre fire northeast of Greenville in the Chamberlain Lake area. That was a campaign fire that burned over the course of about a week and involved a lot of firefighters and shifts where we had to work people twenty-four hours a day. I was working in a wildland fire engine dousing the embers. I remember a lot of smoke, and I remember seeing flames shooting up above the trees in the distance. You’d see a big ball of flames shoot up, and you’d hear a roar and perhaps some embers would fly out. We could see them being cast out. I wasn’t worried about it. I was seeing it as a fire on the ground, and I was responsible for just a very small section; I was working on my small area.

“Last year, I was diagnosed with follicular lymphoma and cynobal sarcoma. I approached my fight with cancer just like I do a large campaign fire. It was something where I just saw what needed to be done and took it one step at a time and tried to accomplish what I could in any given day. In April I had my last surgery. They went in and cut a rather large section of my neck out. Monday I went for a check up, and I am still cancer free.

“I have a little retreat in my backyard where we have a fire pit, and I enjoy sitting out there with the kids in the summer evenings and having a little fire. Fire is not something that I get sick of.”

From our March 2013 issue, read more unexpected ways that Mainers are making a living in the Pine Tree State.