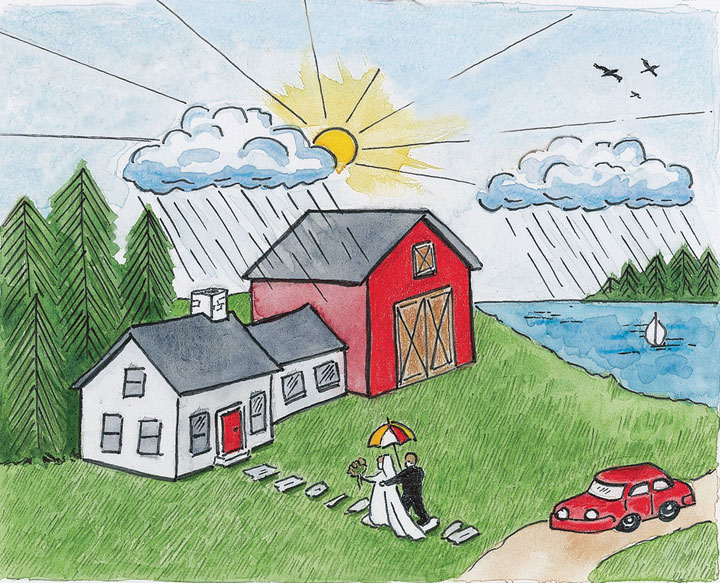 How one couple fell hard for the unlikeliest of love nests.

If, when I was a young woman, you’d shown me the house in easternmost Maine that would one day be my honeymoon cottage, I would’ve laughed in your face.

Having grown up in Bath with my eye on the horizon, I wasn’t sure what life had in store for me, but I knew a few things: When — and if — I settled down, it would be anywhere but Maine. When — and if — I married, my betrothed would be someone exotic and most definitely from away, who would sweep me off to a honeymoon on a Greek isle, with a week of clean white sheets in Paris on either end. Definitely Paris.

What definitely was not Paris was this place — a nineteenth-century, shake-shingle Cape, located just outside of downtown Machiasport.
A sagging ell connected the house to a barn. The trim needed a paint job. The front stoop was crooked. Inside the country kitchen was a giant cookstove, which was not only the house’s primary heat source, but also how water was warmed. (Bathing was done under a rubber hose in the upstairs tub and planned around mealtimes.) Out back stood a dilapidated greenhouse. To be generous, one might say the place had ramshackle charm.

What my younger self couldn’t have known is that by the time my (then) new beau, John, first brought me down that dirt road to show me the house (which belonged to his cousin Christie and her husband, Steve), my perception of things had changed a bit. I was thirty-eight, and, after years of travel (including jaunts to Crete and Paris), was firmly transplanted back in my home state. Somehow, the Down East coast, old farmhouses — and settling down — took on a new allure with this fine Maine man by my side.

During our courtship days, John and I borrowed the house often, while Steve and Christie were at (I’m not kidding) their Tuscan villa. We poked around the shoreline at Randall Point, Jasper Beach, and Roque Bluffs, and beyond to East Lubec Beach, Quoddy Head, Campobello, Cobscook, and the Bold Coast trail. We gathered windfall apples for applesauce and the last of the summer’s tomatoes and basil from the hothouse out back. Evenings, we’d sit by the small fireplace in the parlor and read or listen to the radio, while dinner simmered on the cookstove.

So when I married my Maine man in September 1999 and we needed to defer our proper honeymoon until the following May, there was no question where we would spend our interim one.

When we arrived on that rainy September afternoon, rolling past the blazing crimson blueberry barrens, down the East Side Road, and making that familiar abrupt turn on a hill crest, it truly was a homecoming. We were both exhausted and sick as dogs, and we needed to repair. During that week, the rain would not quit. We rose lazily, made espresso from a blackened, battered pot and sat by the stove, blowing our noses and reading. I’d picked up a copy of Louise Dickinson Rich’s We Took To the Woods in a junk shop — the perfect Maine honeymoon read.

Despite the weather, John and I would go out adventuring each day. If we needed a brush with civilization, we went “barhopping” in Lubec. This meant a beer at the Lighthouse Tavern. While the place had all the ambience of a laundromat, it sat above the public landing, where an enormous riptide boiled with feeding seals. Two eagles would make an occasional swoop from their island nest in Johnson Bay. Casting shadows that darkened the plate glass windows, they’d nab a fish and soar off. Not a bad show for the price of a bottle of Sam Adams.
There was also our shopping spree at the Calais Marden’s. Maybe we were a bit “woods queer” (one of Rich’s terms) by then, but when I hit those racks, I went into an instant shoe coma. I purchased a bagful, which I promptly returned — save the vinyl, chartreuse mules — once I saw them in the Portland light of day. But at the time, it felt as though I’d just shopped along the Champs-Élysées.

As the years passed, we seemed to spend less and less time at “our” house, as work and family demands grew. We found excuses not to make the four-plus-hour drive, which we used to do on a lark back when everything was new and we felt so carefree.

When we got the news that Steve and Christie had sold our honeymoon Cape a few of years ago, I can’t say I had any right to begrudge their decision. But nearing our tenth wedding anniversary, while John and I were en route to the Canadian Maritimes, we couldn’t help taking a detour down that familiar dirt road. Pausing in front of the house, it all came back: the blazing barrens, the rainy walks, the armloads of apples, the hideous shoes, and — there, before us — the crooked stoop, where we sat after the night sky cleared, my new husband and I, and knew that a corner of the Maine coast is world enough when your eyes are filled with stars.

Elizabeth Peavey is a Down East contributing editor and teacher. She is most recently the author of Glorious Slow Going: Maine Stories of Art, Adventure, and Friendship.