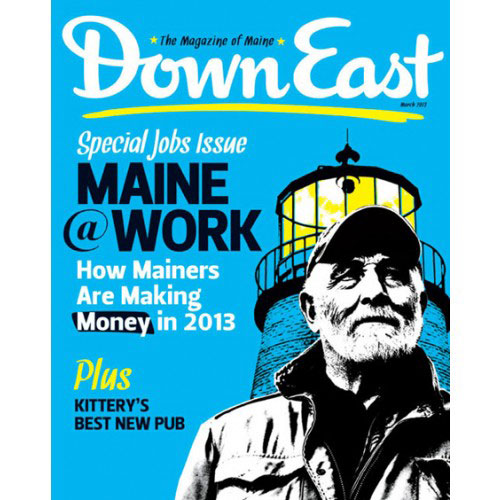 How Mainers are making money in 2013

[separator type=”thin”]
[columns_row width=”half”] [column] [O]ver the past forty years, Maine’s economy has shifted in important ways. We now work in a service- and innovation-oriented world. The natural resources industry is no longer among the state’s largest, thanks to automation and a shifting global marketplace. Maine has also become notably Portland-reliant — the city, according to the Bangor Daily News, generates nearly half of Maine’s gross domestic product and supports one-third of its jobs, a level of city-state domination atypical nationwide. Healthcare and education combined now employ more people than any other industry — healthcare serving the state with the country’s oldest median age 42.7, and education prepping our next generation, a generation that Brookings Institution economist Bruce Katz recently reminded us will work in a world that values creativity and production.

Take a drive around the Pine Tree State and you’ll see evidence of the new Maine economy, a sometimes tense collaboration of metro flair and country tenacity unified by an intense devotion to work as homage to place. Time and again, we heard from the Mainers profiled here that excelling at their job is a way to make the state they love even better. There’s a humble sense of community that remains old-fashioned even as Maine modernizes. Business, of whatever stripe, is personal, and success is a village concern.

To find out how Mainers make it, Down East interviewed eleven members of Maine’s top ten industries, selected by the number of people the industry employs, and, therefore, its presumed breadth of influence. (Healthcare and education deserve a brief note here: While they are bundled as one industry by the Department of Labor, we have profiled them separately to better illuminate their distinct roles in our state’s economy.) While it may go without saying that there were many more voices than could be included here, we hope that these brief profiles serve as entertaining glimpses of our larger economy. And so, without further delay, from fire rangers to lobbyists to a lighthouse restoration specialist, north and south, urban and rural, here are stories from working Maine.
[/column] [column]