From Our Archives Winter 1961 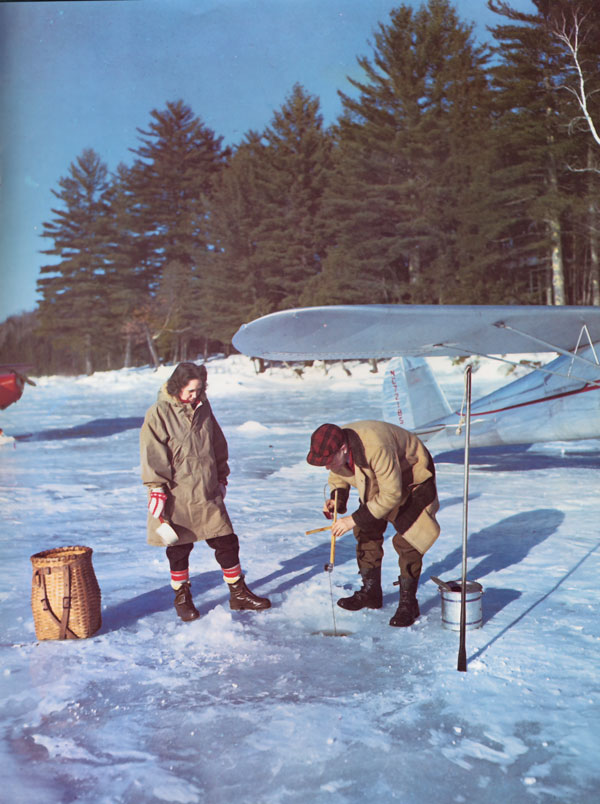 A Flight to Ice Land

From a story by Jay Hutchins, published in the winter of 1961. Photographed by Harry Packard.

From the frozen surface of Moose Pond in Bridgton, an ice fisherman may rest his chisel, look up the adjoining slopes of Pleasant Mountain and see a skier. From the top of the mountain’s busiest trail, the skier may lean on her poles, look down on the pond, and see the ice fisherman.

During a typical Sunday afternoon in midwinter, the two may regard each other frequently across a mile of frigid Maine air, each with an active antipathy for the other’s sport and grave doubts as to the other’s sanity.

But each has traveled to his respective vantage point for about the same reasons. Each has left a snug living room, the Sunday papers, and the TV set to savor the freshness of winter outdoors, to be surrounded by the beauty of snow, ice, and evergreens, and to accept a stimulating challenge from Nature herself.

Maine’s best ice fishing — like its best open-water fishing — is found in the Moosehead region and farther north in the Allagash. Brassua Lake, and Moosehead itself, are top-notch winter sources of trout, salmon and togue, with the latter lake offering a possible dividend of whitefish and cusk. The large, north-country lakes are attracting more and more ice fishermen annually, many of whom fly in aboard ski-equipped planes operated by Greenville’s charter pilots, Roger Holt and Dick Folsom.

Ski-planes have all but disappeared from Maine’s skies and frozen lakes, says Jake Morrel, one of Dick Folsom’s bush pilots in the 1970s. Morrel recently published a book about his mentor’s life as a legendary Maine pilot. The bush-flying industry, he explains, took a hit from substantial road construction in the later 20th century, together with the mass adoption of reliable snowmobiles and ATVs. These days, nearly all of Maine’s lakes are accessible by land. “When I flew for Dick in the ’70s,” Morrel says, “Folsom’s employed six pilots. Now, there is no Folsom’s.”

See more From Our Archives!