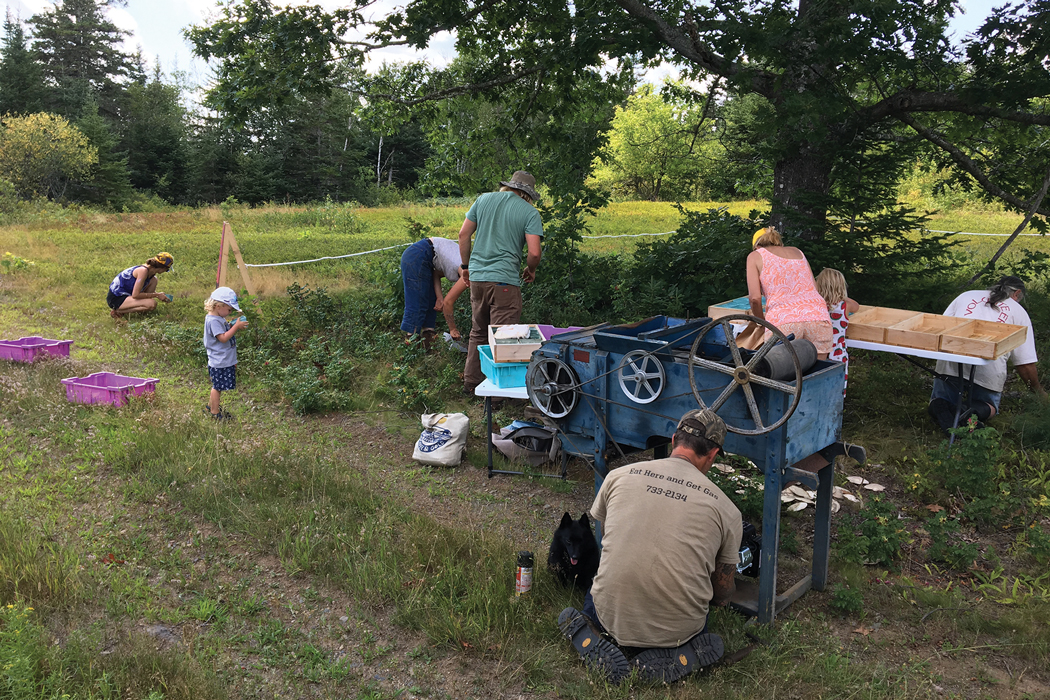 The wayfaring founder of an agrarian lit mag is calling Down East Maine home — and reimagining the area’s rural economy.

The fourth volume dropped in January. Its theme, “The Greater ‘We’,” doesn’t rule much out. Across 400 pages, topics bounce from the intersection of faith and agriculture to the history of African-American farm cooperatives, from plant breeding to wildfires, from the humble magnificence of the sweet potato to cannabis cultivation.

Ben Franklin’s Poor Richard’s Almanac served up some heady stuff in the 1700s, von Tscharner Fleming says, and when she started to think about an almanac of her own, she wanted to do the same. “Young farmers were showing up in places like Vogue magazine,” she says. “It was all getting very hyped and hip. That’s nice, but we thought we needed a venue for farmer-to-farmer discourse. It’s still a little romantic, but it’s not about which style of fancy rubber boots to buy.”

The group behind The New Farmer’s Almanac is Greenhorns, a “grassroots media collective” and “a bunch of punks,” von Tscharner Fleming says, that she founded in 2008, the year she graduated from University of California, Berkeley, where she studied agroecology. The group makes podcasts and films and puts on educational workshops to attract and support new small-scale farmers. In 2014, her Greenhorns work — and her work starting the National Young Farmers Coalition (which does policy advocacy), the Agrarian Trust (which preserves farmland), and Farm Hack (an open-source farm-tools help site) — landed her on Fortune and Food & Wine’s list of the 25 most innovative women in the food world.

All that time, Greenhorns never found a permanent base. Von Tscharner Fleming bounced up and down the West Coast and New York State, working as a nursery manager here and a farmhand there. Her collaborators are scattered around the country. “Pretty much everybody who works for Greenhorns does it part-time,” she says. “And their other job is farming.”

Increasingly, she found herself in Maine. She worked seasonal gigs for seaweed harvesters, and, in 2015, she organized the Maine Sail Freight project, shipping several tons of goods — honey, jam, rolled oats — from Portland to Boston aboard an old schooner, to up the visibility of Maine farms in the broader regional market.

Maine Sail Freight from The Greenhorns on Vimeo.

Two years ago, a friend from Maine Farmland Trust told her about a saltwater farm for sale in Pembroke, on Cobscook Bay, with 12 acres of wild blueberries. “She said, ‘I think you might be crazy enough to buy it,’” von Tscharner Fleming recalls. She named it Smithereen Farm, planted 125 apple, pear, plum, and nut trees, and, last summer, began holding Greenhorns workshops there. This year’s topics: seaweed, cider, yurt building, and more. She also bought the abandoned Odd Fellows Hall in town and fixed it up enough to host concerts and show films (a tech-savvy local pastor wired surround sound for her).

“This area is good habitat for small farms,” she says. “There’s affordable land, and plenty of it. There’s also lots for us to do here.” Washington County is Maine’s poorest, and von Tscharner Fleming realizes the challenges: “People say it’s too cold, too poor, too far away.” But she points to places like Essex County, in upstate New York, where an influx of small farms reinvigorated the economy. Or Hardwick, Vermont, which shook off the post-industrial doldrums and became a food-processing hub. “The places where there’s energy and excitement,” she says, “are often places of reinvention. I know it sounds kind of Pollyannaish — ‘Oh, yes, young farmers, very nice.’ But we have all the ingredients here. We’re relatively close to amazing East Coast markets. There’s a different future possible.”

Greenhorns, she hopes, can help attract the attention, resources, and future farmers that could tip the balance in Washington County’s favor. “But it’s not just about people willing to start a business on the land,” she notes. “It’s also finance, markets, infrastructure, policy.” So far, at least, she’s been encouraged by a collaborative local spirit. “In my experience,” she says, “when there’s less pie, people share it well.”

Go to greenhorns.org for more about the group and The New Farmer’s Almanac.