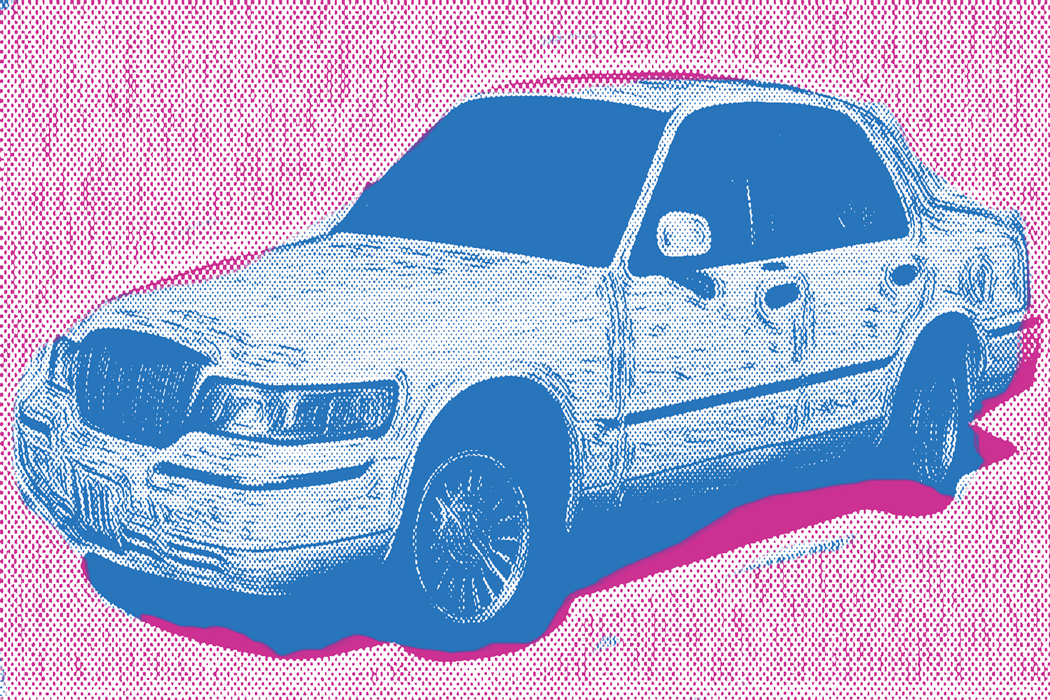 [dropcap letter=”I”] love driving Route 1 in the later summer, right around peak blueberry-picking season, cruising past Ducktrap Harbor and the Camden Hills. And my favorite car to drive it in is a light-gray 1998 Mercury Grand Marquis named Moby. I didn’t name Moby. The car’s original owner, Jerry Savitz, did, because his former sedan drifts down the road like a mellow whale. The Grand Marquis was a cushy ride in its day, and Moby’s soft velour seats are plenty wide to fit three across. Before my family moved from California to Maine last summer, I drove an all-wheel-drive Mercedes wagon. It would have done fine here, but Moby is a better fit for our life in Northport.

We chose Northport because of Jerry. My husband’s cousin lived in this seaside town nearly all his life, and his stories took us back to a time we could only imagine: stories of Jerry selling rooster feathers from the Penobscot Poultry plant for pocket money, of the bleakness of Belfast after the chicken industry fizzled in the ’80s, of the time that Jerry’s horse, Queenie, pulled up her stake in the yard and galloped free across the Northport golf course, ruining the greens. In 2004, I married my husband on the same sloping lawn where Queenie once grazed, bordered by a lush garden, raspberry bushes, and the blue of the bay.

“What’s the key to a good marriage?” I asked Jerry around that time. I’d been divorced once already, and Jerry and his wife, Gail, seemed to have it figured out after 43 years. He cocked his head of gray hair.

“Well, whenever Gail and I have a disagreement, I ask myself one question,” he said. He pronounced it whenevah. “‘Is this the hill you want to die on?’ Most of the time the answer’s no. And then we go about our business.”

“And if the answer is yes?”

Deep lines crinkled around Jerry’s blue eyes when he smiled. His face was a road map created by hard work and laughter.

“Well, then we usually have a fight.”

Like Moby, Jerry was straightforward and dependable. Like Moby, he went about his work quietly, but there was a lot going on under the hood. Over the years, his jobs included used car salesman, lobsterman, farmer, and inventor (his “Squirrel Away” birdfeeder zapped rodents with an electrified bar to keep them from eating bird seed). In 1985, he opened Darby’s Restaurant in Belfast, which became an institution, a place you could go for a pint, excellent pad thai, and warm, honest hospitality.

Every Monday night for 30 years, Jerry hosted a poker game there, in his homey, well-worn office. Hanging next to his desk was an enlarged photo of his son, Carl, grinning ear-to-ear and holding up a hand to show a roofing nail pounded clean through his finger. Any parent I knew would cringe at the thought, but Jerry got a big kick out of it. When I showed up at poker night a few years ago, Jerry stood up and gave me one of those eye-crinkling grins, announcing, “It’s our first female player ever!” Playah evah.

“No girls allowed?” I asked, and Jerry shrugged.

“Just never had one before.”

I didn’t win a hand all night, but I laughed harder than I had in a long time, and I’d throw away that money all over again for the experience.

It wasn’t long after that, in December 2015, that Jerry sat down at home in his favorite chair, in front of a cheery fire, and died at the age of 74 of a coronary aneurism. I still remember the punch of sadness I felt when I heard the news on the other side of the country. But then I had to smile. If I’m ever granted three wishes, one of them will be to die in the peaceful way that Jerry did, surrounded by the sacred things of my life, close to a partner who loves me and a glittering expanse of familiar sea.

We chose Northport because of Jerry. His stories took us back to a time we could only imagine.

For a year, Moby sat in Jerry’s barn. Gail thought she’d donate the car, but instead, my husband picked Moby up when we arrived in Maine. He vacuumed a layer of dust and spiderwebs, replaced a dead battery, and then popped the trunk. Inside, he found a reading lamp, a scatter of tools, a Maine Atlas and Gazetteer, several golf shirts, a bag of golf balls, and a bright-orange pair of sunglasses.

But the most interesting item was a small white box containing the ashes of Jerry’s sister. Faith A. Smith. Her name was printed on top, alongside the words Penobscot Mortuary. I puzzled over the discovery of those ashes in Moby’s trunk. Jerry had loved his sister. He’d mourned her death, had her cremated, and picked up what was left. And then what? In the end, I decided he’d simply been too busy enjoying the present to make dealing with the past a priority.

So now, I drive around with those ashes, and who’s to say that isn’t the best place for them? Faith is back there whenever I pop Moby’s trunk to stash my bargains from Ocean State Job Lot, and whenever I stow a pair of Bean boots on a seemingly clear day, because I’ve learned how quickly Maine weather can change. That trunk is big enough to hold everything I need, with plenty of room left over for Faith.
“I always thought Moby was such an old fart’s car,” Gail said when I told her how much I enjoyed driving it. “But I guess it does have a kind of . . . presence.”

Some of my friends out West still wonder why I traded a Mercedes for a Moby, why I traded freewheeling sunshine for months of Maine blizzards. It’s no use trying to explain how Moby’s old, ripped headliner, fluttering in my rear view, helps keep me grounded, how it reminds me to be less concerned with appearances since all that matters, in the end, is a life well lived. Or how I’m confident that we’ll manage the winters, even without the guidance of my favorite Mainer. So I just tell them there’s style left in the old girl, and she handles better than I ever expected in the snow.

Our editors picked five of their favorite My Maine essays from the past five years. Read more of their picks.