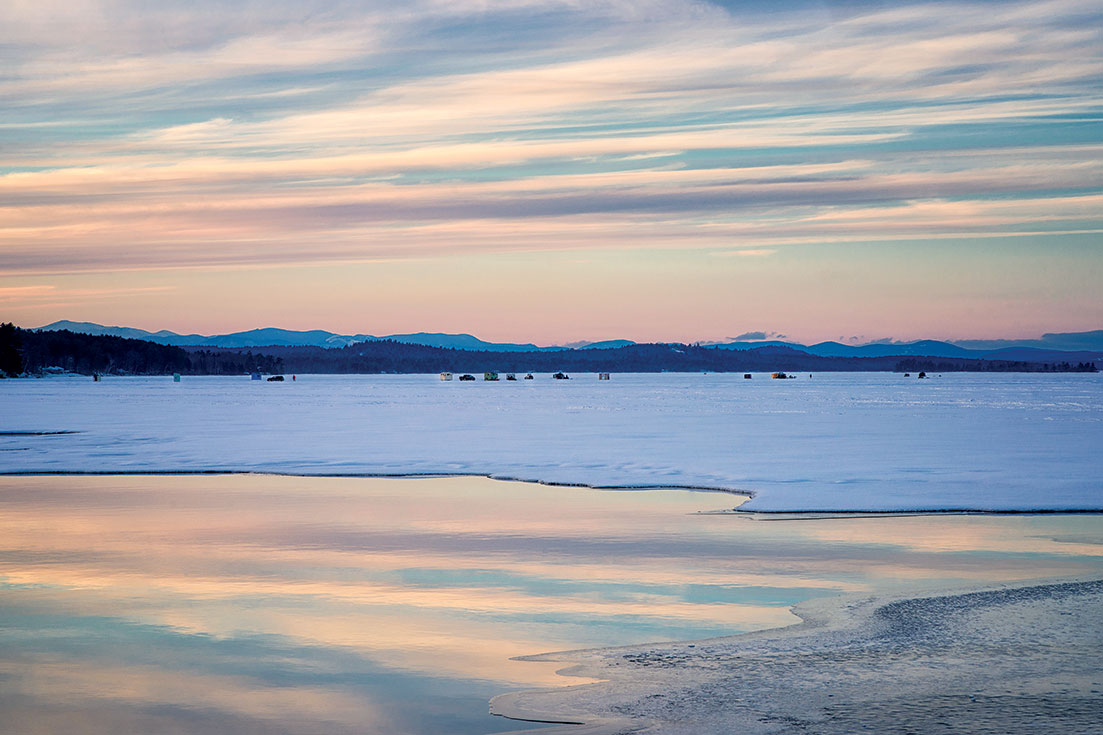 On being there — and being present — at the first moment of spring thaw.

[dropcap letter=”M”]y husband and I were at the camp once before around ice-out. Busy with some springtime project, we kept looking to see if the lake had turned to liquid yet. We finished our weekend’s work in time to see the last shimmering layer of rotten ice acquire a smooth, wet sheen. Then it was suddenly gone, sunk below the surface. That’s how ice-out always happens. Or so I thought.

This time I’ve arrived earlier, just me, a few to-dos, and a camera to sharpen my eyes. It’s balmy for March, and I’ve packed shorts and a camisole. But as I arrive, any spring-fevered thoughts of putting in my kayak vanish when I see the lake, still white and frozen. Spring is always a week behind in Washington County.

On my first day, not much changes on the lake — or does it? The glistening white confounds my camera, contrasting with the peat-brown water banding the shore. Looking down First Chain Lake at midday, I see ripples running along a nearby island — maybe an optical illusion, the surface of the water swept by the breeze and magnified along shore. I know that atmospherics on the horizon can enlarge beaches and moonrise in the same way. Like how worries loom larger when looking towards the not-so-distant shores of aging.

By late afternoon, the ice sheet’s ragged edges have a silvery look. Two more days here. Maybe by then the magic ball will have dropped.

Towards evening, I hear a flock of geese come in for the night, landing in the cove north of our kame-kettle peninsula. Or maybe not. I wonder, could wind and current have opened things up on neighboring Second Chain Lake?

After all this waiting, I am in the front row seat for this, the first moment of something momentous! To think I could have been in the privy, washing dishes, sweeping, or packing to head home.

Come morning, our lake is even grayer — first the dull silver of a worn nickel, then darkening shades of gunmetal and charcoal, looking rough like asphalt. Silver streaks begin to snake across, like slow lightning. I hike to an eagle-eye view of the channel between the two lakes. Yes, there’s an open lead advancing into First!

Throughout the day, behind the sounds of my neighbors working on spring projects, I feel a hush of anticipation, as if everyone around the lake is watching, waiting for the change. Will the color go all at once from gray to black to limpid blue? Will it happen in the heat of midday? In the late afternoon, before the cold front sweeps out the Bermuda air? Or in the frosty night, while no one is watching?

Some moments pass too quickly for the camera, like the swimming muskrat that dove to evade my viewfinder. This moment is passing too slowly. Both are too wild, too intimate to capture on film. You just have to be there.

I wake the next morning to a lake still frozen, but a swath of sparkling water has advanced down the channel. As I wade in to fill my jugs for dishwashing, the golden lake water numbs my feet. I return after breakfast with a mug of coffee. Our beach is a morning suntrap any time of year, especially welcome after a chilly night.

First, I notice whitecapped waves across the lake, charging downwind. Then, I see movement, the ice beginning to edge away from shore, moving in slow motion back toward the channel. It speeds up, receding from the shoreline — pushed or pulled, I don’t know. Curled out by the water eddying around our cove? More likely, the current is tugging on the hem of the ice, pulling it down-lake.

After all this waiting, I am in the front row seat for this, the first moment of something momentous! To think I could have been in the privy, washing dishes, sweeping, or packing to head home.

In minutes, the ice sheet has moved twice as far as I usually swim, out of our cove and still receding. It takes into the afternoon for the current to carry the ice down-lake, maybe piling it up in slushy rafts above the dam.

In the meantime, I head out for a walk and meet my neighbor, Paula, grading the camp road with an old axle. The ice-out is pretty awesome, Paula agrees, and she reports that the ice has gone out on Second Chain as well. I walk to the landing for a look.

Above the channel, it’s all rolling waves and slushy, undulating plastic ice. I’ve heard the ice sometimes goes out this way, not as a drifting sheet but as a plate of columnar crystals that ultimately crumble, tip over, and sink. Looking at the ice pockets that remain along this north-facing shore, I suddenly see the bigger picture of this seasonal happening: it is a microcosmic reenactment of how these outwash lakes were formed, in the last stages of a melting glacier.

Heading back, I too feel more fluid, like I’ve shed a cold and crusty layer, those wintry worries I’d been hoarding. The flow of life and love moves on, as it must. All waters run clear in time.

After sunset, I glide the cabin windows shut, light my lamps, and make a fire. Behind the sounds of my cooking and the logs crackling, I hear a faint piping outside. There it is again, closer now. Ice-out is complete, herald the loon!