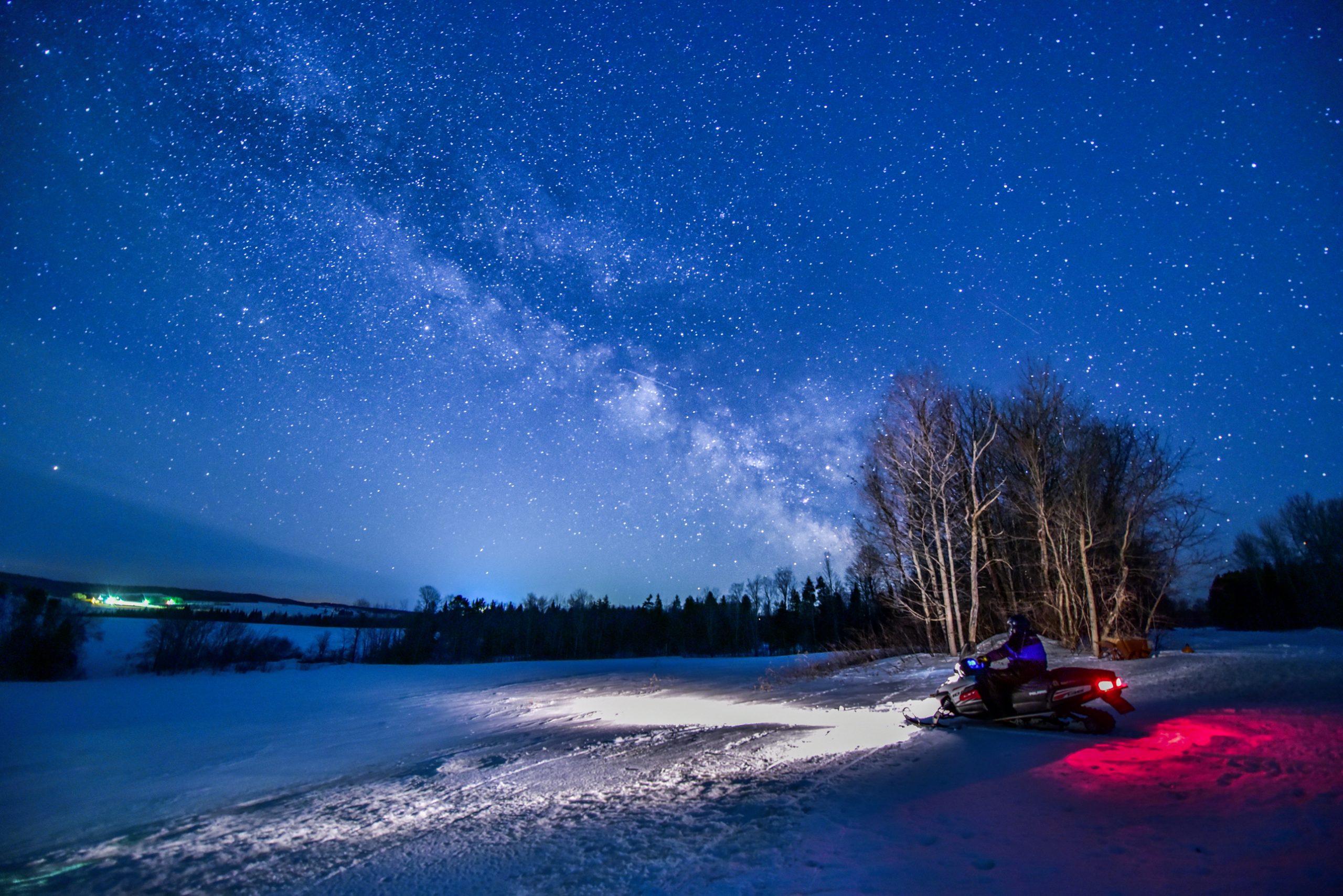 Maine's immense northernmost county is a braaap-er’s delight. Here's what you need to know.

In Aroostook County, where a mere 70,000 people spread out across almost 7,000 square miles, everything about the landscape feels expansive: the long and little-trafficked roads, the sweeping vistas of foothills and valleys, the rivers that seem to oxbow endlessly through them. It’s a region of woods, waters, and farmland — and snow, a whole damn lot of snow. Almost 13 feet of the stuff piled up in Caribou last winter, which was impressive, even if it was still 3½ feet shy of the record.

All that space and all that snow made the County a natural market when consumer snowmobile sales first took off in the 1960s, and sleds caught on there quicker than just about anyplace else in the country. “Back in those days, the ratio of work to play with these machines was one-to-one — you worked on ’em for an hour and you rode ’em for an hour,” remembers Kevin Freeman, owner of the 28-year-old Sled Shop in Presque Isle. Farmers and loggers had a lot of ground to cover, often hauling tools, but even social calls required overland travel. “People would ride over to their neighbor’s house for a cup of coffee or maybe something more potent,” Freeman says.

As engines became more reliable, sledders started traveling farther. And in a region that’s 95 percent private land, that meant crossing neighbors’ properties. Soon, fences were getting cut and tensions were rising. In 1979, the state legislature passed a law limiting landowners’ liability should recreationists be injured on their property, which helped spur the creation of the state’s 4,000-mile Interconnected Trail System, or ITS, along with dozens of local snowmobile clubs that tend to sections of trail. Today, some 280 nonprofit clubs across the state, including some two dozen in Aroostook County, maintain trails and landowner relations and welcome visiting riders.

Want to join them? Although it’s varied enough to lure experienced riders, Aroostook County’s well-marked and well-maintained terrain (much of it following old railbeds) is a boon to beginners. Even if you think snowmobiling isn’t for you, read on — because you can’t understand the County without understanding sled culture.

Where to Eat and Sleep

How and where to get in the saddle.

You don’t need a license to operate a snowmobile in Maine, but you do need to register your ride. If you’re a veteran sledder visiting from away, you can do so online ($50 for a three-day registration, $76 for a week, or $100 for the season). During the statewide Snowmobile Weekend, the first weekend in February, visitors with valid registrations in another state or a Canadian province can ride here free.

Find directories of rental agents, guides, and outfitters from the Maine Snowmobile Association, the Maine Professional Guides Association, and the Department of Inland Fisheries and Wildlife.

» With more than 2,300 miles of trail in Aroostook County, you’ll need a map, available from local chambers of commerce, at many grocery stores and restaurants, and from local snowmobile clubs.

» The clubs are your best resource for updates on weather and trail conditions. Many maintain clubhouses where riders can warm up, find WiFi (cell service on the ITS is unreliable), slurp coffee, and grab a hearty breakfast on the cheap. Tapping the clubs’ expertise is also a great way to get to know locals, says Alain Ouellette, a director at Northern Maine Development Commission. “If you’re nice and you seem interested,” he says, “they may just take you out themselves.”

» The Maine Snowmobile Association also sells ITS maps — and offers links to an exhaustive catalog of more detailed local maps.

» The ITS is marked with yellow signs identifying its numbered trails, and they’re often posted alongside additional signs, usually handwritten, noting mileage to a destination or offering cautionary messages about hazards.

Be Safe Out There

» Don’t ride alone. In case of emergency, you can’t always take for granted there will be other riders on the trail.

» Maine has no speed limit for snowmobiles — listen to your guide, rental agent, or local club rep for prudent top speeds based on conditions. Most trails on the ITS are 10–15 feet wide to facilitate two-way traffic. Be prepared to encounter others on the trail: approaching riders, volunteer groomers in big tractors, and plenty of deer and moose.

» On your first day snowmobiling Aroostook County, plan to cover no more than 100 miles. It’s possible to cover twice that, but slowing down lets you get the lay of the land and adjust for any unforeseen hiccups.

» Bring a day pack with plenty of water, a flashlight or headlamp, a multi-tool, a space blanket, extra layers and socks, first aid, a compass and GPS, a small saw and/or hatchet, waterproof matches or lighter, and a tow rope.

» Stay on the trail. Snowmobilers and local landowners have worked diligently to forge relationships and steward trails. One off-trail excursion could cause a landowner to revoke access — not to mention the risks from buried stumps, farm equipment, or snow-filled ditches.

» Read up on the state’s snowmobile laws online.

The scenic stretches that longtime local riders can’t get enough of (and how to enjoy them even without a sled).

For about 60 miles between Mars Hill and Van Buren, ITS 81 skirts the border with New Brunswick — and for about 5 miles north of Limestone, it is the border. Veteran snowmobiling journalist David Wells calls it “one of the most unusual trails anywhere,” a ride through patchy woods and pretty farmland where the northbound lane is in Canada and the southbound lane is in the U.S., with granite border markers between them (no passport needed if you stay on the trail). In Limestone, ITS 81 passes the deactivated Loring Air Force Base, where riders can cruise an abandoned runway to admire the 1947 control tower.

+ See it sledless: If you don’t have a snowmobile, get the same feel driving Route 1A through the wide-open eastern Aroostook farm country.

This 50-mile route bends and dips between Fort Fairfield, on the New Brunswick border, and Ashland, to the southwest. Much of it hugs the bank of the wide and scenic Aroostook River, and it passes the log-cabin clubhouse of the Aroostook River Snowmobile Club, in Castle Hill. But it’s the view south that Caribou parks and recreation superintendent Gary Marquis loves. “When you’re heading south toward Ashland on a clear morning, if you’ve got your eye in the right spot, you can see Katahdin,” he says. Some 60 miles away, Maine’s mile-high peak looms on the horizon like a white-crested mirage.

+ See it sledless:  On a clear day, a half-mile snowshoe hike up Haystack Mountain, off Route 163 in Castle Hill, rewards with that same Katahdin view.

A network of ITS trails and shorter, club-maintained trails crisscrosses the rugged country between Allagash and Madawaska, the heart of the state’s Acadian culture. “It’s not the huge mountain peaks of western Maine,” says Grand Isle native Leo Dionne, but “the vastness of the hills” keeps him riding here every winter. Views can stretch for miles, especially from the knolls surrounding Fort Kent or at the Long Lake Overlook on ITS 83 in St. Agatha. “It’s filled with huge, rolling hills, and the sunsets are beautiful,” says Bob Meyers, executive director of the Maine Snowmobile Association. “It’s a real adventure.”

+ See it sledless: Find the Long Lake Overlook off Guerrete Road, 5 miles east of Route 1 in Frenchville, just past the airport.

Adventurous sledders head west from Eagle Lake or south from Allagash to reach the 22,000-acre Deboullie Public Reserved Land (that’s pronounced “da-bully”). ITS 120 bisects the parcel of ponds and forested hills, which includes nearly 2,000-foot Deboullie Mountain. Dozens of miles in any direction from civilization, Deboullie is popular with backcountry riders seeking powder stashes and folks toting snowshoes looking for solitude. “Once you head into the woods, you’re looking at one person per square mile,” says Jen Brophy, owner of Red River Camps, a (summer-only) sporting camp inside the unit. Watch for moose and bald eagles, which likely outnumber people.

+ See it sledless: Sorry folks, this one’s accessible to snowmobilers only.

Scenes from the ITS in Presque Isle. In addition to 4,000 miles of primary trail along the ITS, Maine hosts some 10,000 more miles of local trails, many of which connect to the ITS. Photos by Paul Cyr.

Where To Dine and Unwind

A rustic tavern in tiny Stockholm with ITS 83 out its front door, Eureka Hall was built by the Odd Fellows in the 1920s and has formerly housed a barbershop, general store, jail cell, and bowling alley, among other things. The tavern has a great lineup of Maine craft beers and a mildly zany pan-global pub menu of curries and fried brussels sprouts and coconut shrimp egg rolls (along with burgers and pizza). The real draw, though, is the live-music lineup, with weekend concerts that skew rootsy and includes some nationally touring acts. A true Aroostook gem and a great place to raise a glass when you’re done on the trails for the day. 5 School St. 207-896-5868.

This family diner off ITS 83 is known for two things: jaw-droppingly gargantuan portion sizes and homemade (and also humongous) pies and whoopies. Come for comfort-food faves like pot pies, prime rib, and poutine. Trust the specials board. And seriously, plan to split whatever you order. 1687 Bangor Rd. 207-532-7808.

The County hosts a bunch of classic Maine sporting camps — Hewes Brook is a standout. Siblings
Phil, Dana, and Sue Daggett are the fifth-generation proprietors of the four-season, meal-inclusive lodge that specializes (in winter, anyway) in guiding snowmobile outings on remote, ungroomed trails and tote roads. Located on the wild Fish River, not far from Portage Lake, it’s a convenient base camp for exploring the relative wilderness of Allagash or Deboullie. At the end of the day, riders return to hot meals, a woodstove, a rec room, a hot tub, and Canadian whiskey at the bar. Hewes Brook Rd. 207-453-7036.

A 19th-century farmstead, sporting camp, bison farm, and ride-in diner all rolled into one, the Homestead Lodge offers B&B-style lodging (with breakfast) right on ITS 85, at a nice midway point between the Katahdin region and the County’s more northerly reaches. Riders just passing through can fill their tanks, both literally (there’s gas) and figuratively at the Buffalo, a taxidermy-heavy dining room serving burgers, chili, and stew made with the bison raised out back. 871 Oxbow Rd. 207-435-6357.

A hub for snowmobilers on ITS 83 in St. Agatha, Lakeview can be packed on a Saturday from lunchtime straight through last call. What started as a burger and hot-dog stand in a garage in 1983 has expanded into a steak-and-seafood joint with a swinging bar and lounge, a huge lot for sleds and trailers, and (as the name implies) panoramic views of Long Lake out back. Don’t skip the peanutbutter pie. 9 Lakeview Dr. 207-543-6331.

The best place to warm up and caffeinate along the Border Trail, Manaus sells used books to fund their nonprofit coffeehouse — beverages are offered for a suggested donation. The cozy shop is a hangout for students from Limestone’s Maine School of Science and Mathematics magnet school. 30 Main St. 207-325-6146.

ITS 83 crosses Mars Hill’s otherwise tired Main Street about 500 feet from where Michael Stiggle opened this spot for burgers and barbecue in 2017. It’s worth a detour for the house-smoked brisket, dozen-plus burger toppings (mac-and-cheese, pineapple, various house sauces), and hand-cut fries (made with Aroostook potatoes, naturally). The dining room still has the handsome tin ceilings from its former life as a five-and-dime. 45 Main St. 207-425-1056.

Love the County?
Buy this issue!