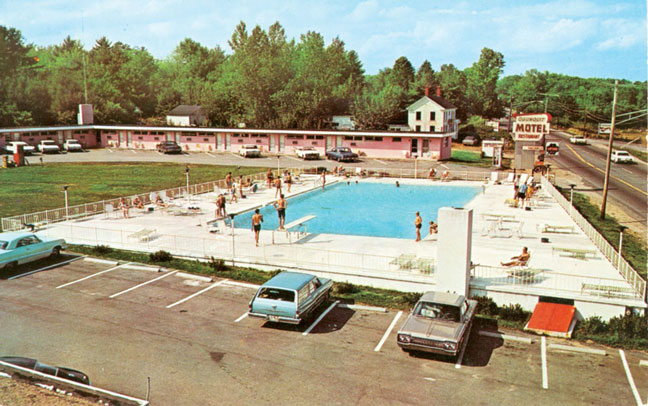 The many faces of Route 1A.

[T]he refusal of U.S. Route 1 to lay still is nowhere more apparent than in the diversions it makes as Route 1A, Business 1, and Bypass 1, alternative routes, known as bannered routes, that sometimes follow its original course and sometimes just make side trips around or down town. What they all have in common, though, is that they eventually return to the main road.

There are 1A tangents along the summer shore from York to Cape Neddick, along the Portland waterfront, a Business 1 swing through Damariscotta and Newcastle, a Route 1 bypass around downtown Rockland, a 1A stretch from Milbridge to Harrington while Route 1 wanders up to Cherryfield, and another from Jonesboro to Machias through Whitneyville. And then there are the two major 1A detours — the fifty-mile sidetrack from Mars Hill to Van Buren as Route 1 in Aroostook County veers west through Presque Isle and Caribou, and the fifty-mile loop from Stockton Springs up to Bangor and back down to the coast at Ellsworth.

Aroostook County’s 1A route evolved over the course of several decades as Route 1 and Route 1A between Mars Hill and Presque Isle essentially switched places, 1A running through Easton after Route 1 abandoned the Easton route. For years, Route 1A ended in Caribou. Its current routing was established in 1989 when Representative Hilda Martin (D-Van Buren) succeeded in persuading the federal government to designate Maine’s Route 165 from Fort Fairfield through Limestone and Caswell to Van Buren as U.S. Route 1A in order to improve the roadway along the border.

The Bangor 1A loop is a function of the fact that U.S. Route 1 originally followed the Penobscot River from Stockton Springs up to Bangor and then back down the other side of the river to Ellsworth. In 1930-31, however, the scenic Waldo-Hancock Bridge across the Penobscot was built, connecting the towns of Prospect and Bucksport over Verona Island. The new bridge, dedicated in 1932, reduced the drive from Belfast to Ellsworth by thirty-seven miles and an estimated forty-five minutes. (The Penobscot Narrows Bridge replaced the Waldo-Hancock Bridge in 2006.)

Back in the 1960s, John Dority, now retired as the Maine Department of Transportation’s chief engineer, oversaw the designation of Business 1 through Damariscotta and Newcastle and the design of the new Route 1 bypassing those downtowns. Back then the relocation faced very little public opposition.

“The only person absolutely against it was Bob Reny of Renys Department Store,” recalls Dority. “But Damariscotta was a worse chokepoint than Wiscasset ever was. There was one public hearing, and we were building within a year. Of course, we couldn’t build there today.”

Maine people are much more sensitive to the state’s natural and cultural heritage than they were fifty years ago. Just as the presence of an eagle’s nest helped defeat the long-sought Wiscasset bypass, the fact that the new route of Route 1 around downtown Damariscotta and Newcastle went right through an ancient Indian shell midden dating to the Red Paint People would be a road killer today — chokepoint, bottleneck, traffic jam, or no.

Maine Route 1 by the Numbers
These figures were compiled the old-fashioned way: by seeing and counting. Could we have missed a church here, an auction house there? You’ll have to drive the 527 miles yourself and let us know.