What is it that makes a lighthouse so captivating? Transform an ordinary lighthouse visit into an all-day coastal getaway with these five unique day trips, perfect for a late-summer Saturday by the sea.

From our September 2014 issue.

Nearly 100,000 visitors flock to Pemaquid Point each year to stop by this icon — and not only because they’ve seen it engraved on the back of Maine state quarters. The painted white light tower — and its reflection in a puddle of ocean water on the striated granite coast — is one of Maine’s most photographed images. The tower even inspired painter Edward Hopper, who captured the scene in his 1929 painting Pemaquid Light. The original structures at the station were constructed in 1827 but quickly deteriorated (most likely, historians assume, because the builder mixed his mortar with salt water). The new, structurally sound tower was finished in 1835 and still stands today. In 1940, residents of Bristol successfully purchased the property from the Coast Guard for a sum of $1,639. The town has since recast the surrounding grounds as a park, adding an art gallery and museum in the former keeper’s quarters.

More to Explore:
Dig your toes into a quarter-mile of fine, white sand at Pemaquid Beach, a rare and welcome break in Maine’s rocky coast. Its natural beauty is augmented by plenty of amenities: hot showers, large bathhouses, a snack bar, even a rental shop to fill in for forgotten chairs, umbrellas, and toys. Adults, $4; children 11 and under, free. Pemaquid Beach Park, New Harbor.

There’s no better place to eat seafood than at a local fishermen’s co-op, and Pemaquid Lobster Co-Op is no exception. Take a shore dinner or fried basket to one of the picnic tables out back for a heavenly feast. 32 Co-Op Rd., Pemaquid. 207-677-2642.

Kids will love searching for sea creatures in the shallow pools at the Rachel Carson Salt Pond Preserve, an area protected by the Maine chapter of the Nature Conservancy to honor Carson’s pioneering environmental research. Rte. 32, New Harbor. 207-729-5181. 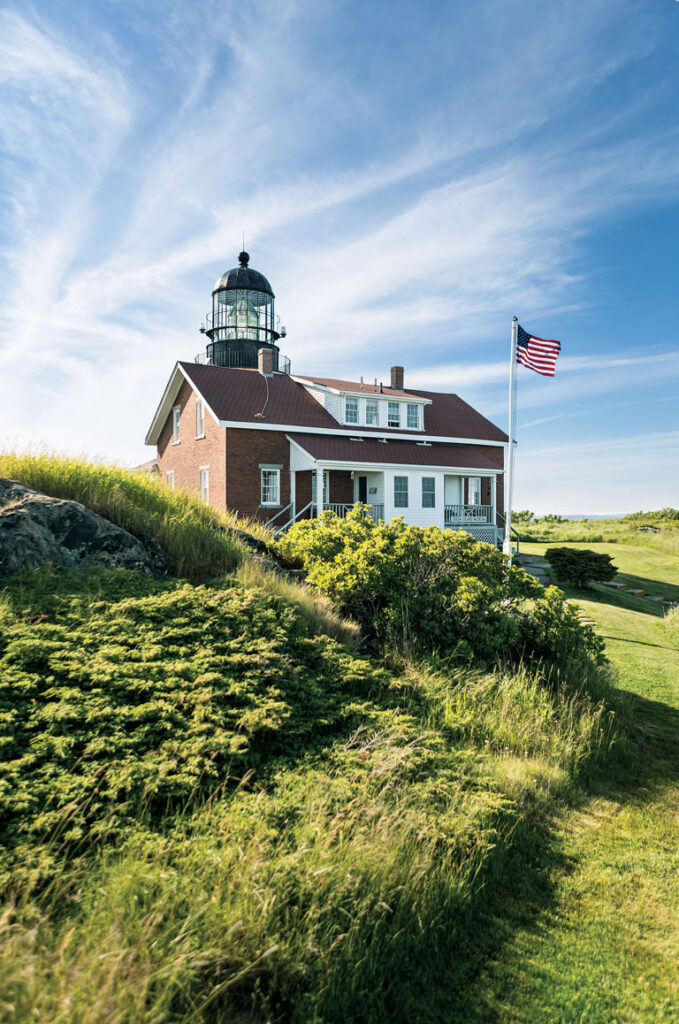 Seguin Island Light, first commissioned in 1795 and situated at the mouth of the Kennebec River, is Maine’s highest lighthouse. The station sits atop a 150-foot hill — a steep incline that complicated the transport of fuel required before the tower was automated. At first, a team of oxen was charged with the task, and it was no small feat: near the turn of the 20th century, the lantern burned 2 gallons of kerosene each hour and the steam-powered foghorn used 150 pounds of coal to operate for the same length of time. In 1895, a 1,600-foot wooden tramway was constructed to do the job and is still operational today. But it’s not just the light station’s rich history that has drawn visitors to the island. For years, many believed Seguin Island to be the location of Captain Kidd’s gold. The rumors were dispelled for good when, in 1936, the U.S. Bureau of Lighthouses granted a one-year digging permit to a man named Archie Lane — who abandoned his search when nine months of excavation left him empty handed.

More to Explore:
Construction on Civil War–era Fort Popham was never completed, but its establishment as a state historic site ensures that its narrow staircases and cool passageways are open to curious explorers from April 15 to October 30 each year. Popham Rd., Phippsburg. 207-389-1335.

Prep for a trip to Popham Beach by grabbing a bite at Percy’s Store, a local grocer where you can eat in or take out generous portions of fried and steamed seafood, ice cream, and more summertime favorites. Open through late September. Sea St., Phippsburg. 207-389-2010.

Make a pit stop in Bath for dining and shopping along bustling Main Street. Or pay a visit to the Maine Maritime Museum, where exhibits on naval architecture and surfing in Maine are on display through the end of the month. 207-442-7291.

In 1806, the United States government commissioned a light station on the eastern edge of Wood Island, a windswept outpost off the coast of Biddeford Pool. Two years later, a wood-shingled tower stood on the island, casting a flashing beacon over the waters of Saco Bay. By the early 1850s, harsh weather had nearly destroyed the wooden structure, and a granite tower was erected in its place. Wood Island Light was maintained by a total of 38 keepers over its first 178 years — 39, if you choose to count Sailor, the canine companion of keeper Thomas Henry Orcutt. Sailor earned widespread fame for his ability to ring the station’s fog bell by gripping the rope in his teeth and pulling with vigor — an act he performed each time a passing craft sounded its signal. “He has never been known to desert his post,” a Wisconsin newspaper wrote of Sailor in 1896, “which is more than can be said of some men engaged to ring fog bells and tend lighthouses.”

Tour:
Boat transportation and guided tours are provided by Friends of Wood Island Lighthouse and must be reserved in advance. Tours depart from the mainland at Vine’s Landing, 1 Lester B. Orcutt Blvd., Biddeford Pool. Upon disembarking, visitors follow a half-mile wooden boardwalk from the boat ramp to the keeper’s house, oil house, and surrounding grounds. Visitors who are at least 12 years old may climb 60 stairs to the top of the light tower. 207-200-4552.

More to Explore:
Maine Audubon’s East Point Sanctuary features a public access coastal trail with views of the lighthouse and the surrounding bay. Bring binoculars to watch waterfowl and shorebirds. Access via parking lot at end of Lester B. Orcutt Blvd., Biddeford Pool. 207-781-2330.

Soak up late-summer rays with a visit to Biddeford Pool Beach, where the city maintains ample parking, bathhouses, and picnic areas. A beach permit is required and may be obtained at the Biddeford city clerk’s office. $20, one-day access; $40, three-day access. Beach Ave., Biddeford Pool. 207-284-9307.

“There is a very good harbor about four miles west of Mount Desert Harbor, called Bass Harbor. A light is necessary to assist vessels in entering it.” So read the 1855 annual report of the Maine Lighthouse Board, three years before the inaugural lighting of Bass Harbor Head Light, a 32-foot tower perched high on a granite bluff on the southwestern tip of Mount Desert Island. Congress allotted $5,000 for the task — a sizable sum compared to the paltry $80 spent to secure the 2 acres upon which the station still stands. Today, ships still enter that “very good harbor” with help from Bass Harbor Head Light, a working navigational aid of the Coast Guard. Its fourth-order Fresnel lens, installed in 1901, casts an occulting red beacon from 56 feet above sea level. The keeper’s house is the full-time residence of a Coast Guard family — and, aside from a 10-foot addition completed around 1900, the home is in its original form.

Tour:
Maine Open Lighthouse Day is the once-yearly opportunity to see the inside Bass Harbor Head’s light tower, which is normally closed to the public. Adventurous visitors may want to follow the staircase down the front face of the cliff and snap a picture of the light station from photographers’ favorite vantage point on the rocks below. Lighthouse Rd., Tremont.

More to Explore:
You could (and should) spend much more than a day in Acadia National Park, but a quick visit here is still worth any traveler’s while. Pick up the Wonderland or Ships Harbor trails near Bass Harbor Head Light. Both offer easy hiking and ocean views. Park fees: Private vehicle, $30; motorcycles, $25, per person, $15. 207-288-3338.

Even after summer blooms have passed, there’s serenity to spare at Northeast Harbor’s Asticou Azalea Garden. A warm September afternoon is the perfect time to amble along its verdant pathways. Free. 3 Sound Dr., Northeast Harbor. 207-276-3727.

Lubec’s West Quoddy Head Light is the longtime guardian of the most easterly point in the continental United States. It was first authorized by the United States government in 1806 and constructed two years later at a cost of $5,000. It was outfitted with a 500-pound fog bell in 1820. The tower stands 49 feet high, its 1,000-watt bulb flashing 24 hours a day (two seconds on, two seconds off, two seconds on, nine seconds off). But the flashiest thing about West Quoddy Head isn’t its beacon: it’s that famous coating of red-and-white stripes, stretching from the base of the tower all the way up to its third-order Fresnel lens. “The passage through all the rocky galleries of the pine tree coast culminates at Quoddy Bay in a masterpiece,” wrote journalist Samuel Adams Drake in his 1891 travelogue The Pine-Tree Coast. Many modern-day visitors (and magazine editors) would undoubtedly agree.

Tour:
Climb 50 steps to the top of the tower and browse the visitor center, housed in the former keeper’s quarters. Staff of the West Quoddy Head Light Keepers Association will be on hand to answer questions and share knowledge. Quoddy Head Rd., Lubec. 207-733-2180.

MORE FROM THIS ISSUE!