The Most Stunning Maine Landscape Photos From Our Special Bicentennial Issue

From our "200 Reasons to Love Maine" celebration: 11 reasons to love the Pine Tree State and 11 of its most breathtaking vistas. 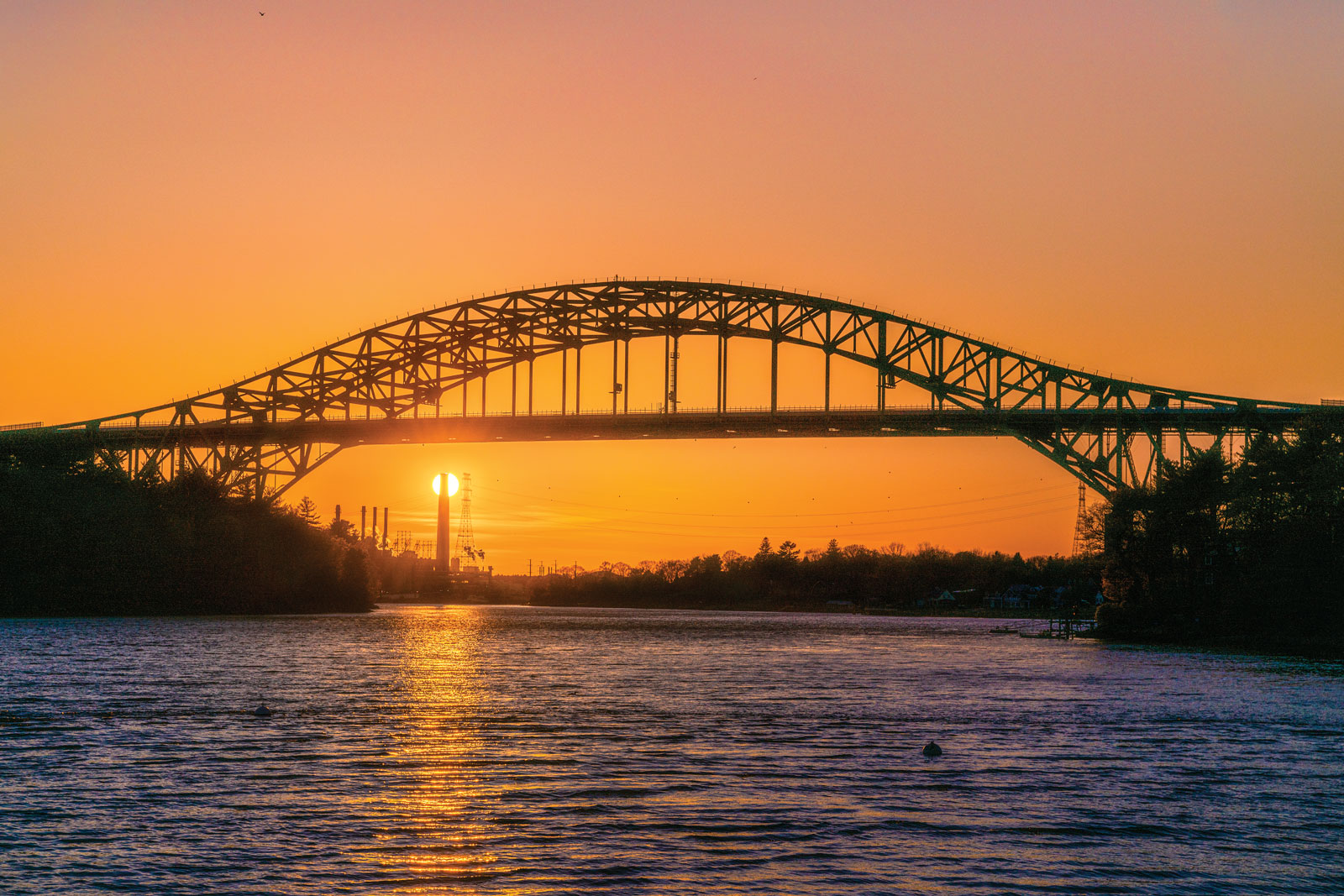 #1 The Feeling of Crossing the Piscataqua River Bridge

More than one writer has used the word love when describing the experience of coming into Maine, and during the dozen years in which we drove up each August, I always swooned a little when we crossed the Maine–New Hampshire border on the Piscataqua River Bridge. “State Line — Maine — Vacationland,” reads the green sign marking the bridge’s halfway point. As soon as that sign came into view, something in me unclenched. Passing beneath it meant we had left behind the noise, crowds, and headaches of our workaday lives. The feeling of crossing the bridge was a feeling of safety, of homecoming, even though we were hundreds of miles from our permanent address.

Today, Maine is my permanent address, the setting for the headaches of my workaday life, but the Piscataqua River Bridge hasn’t lost its luster. If anything, the relaxation response it induces is even more pronounced, because any stretch of time I spend outside Maine’s borders brings its otherworldly qualities into sharper relief, and it tends to send me retreating to my adopted hometown as quickly as I can get there without risking a speeding ticket. When I cross the river, I well up with gratitude for having such a beautiful place to come home to. And I give a fist pump and exclaim “Hooray, we’re in Maine!” every damn time. — Jennifer Van Allen

#74 A Working Harbor Before Dawn

I wake before dawn in a cabin on Ann’s Point in Bass Harbor. Snug in bed, I listen to the wharf waking up across the water, in Bernard. Truck doors slam. Fishermen exchange good-natured curses by way of greetings. Bait crates scrape across gunwales, thump onto boat decks. Strains of AC/DC’s “Back in Black” pierce the cool marine air before they’re drowned out by diesel engines revving to life. If I were out on the wharf, I’d smell the exhaust mingling with the fish stink, the cigarette smoke, and the salt air — the bouquet of a working harbor. The sound of the coughing engines eases into a steady rumble that fills the darkness. The lobstermen are going to work. I hear them motor down harbor, away from where I lie curled under a pile of quilts. Soon, their boats are but a distant drone that lulls me back to sleep. — Virginia M. Wright

The recent certification of Katahdin Woods and Waters National Monument as an International Dark Sky Sanctuary proves what many Mainers and visitors already know: our starry night skies are a treasure. It doesn’t take much light pollution to mar our view of the heavens, and lucky for us, Maine hasn’t got much. Step outside on a moonless night and you might feel overwhelmed at the beauty above. Constellations, planets, even the softly glowing band of the Milky Way seem both close enough to touch and unfathomably distant. My favorite way to take it all in is to paddle to the middle of a lake, lean back, and stare in wonder. — Benjamin Williamson

Rising 760 feet above Moosehead Lake, the sheer southeastern face of Mount Kineo is dark, brooding, and majestic, and its mystique has attracted visitors for millennia. Generations of Native Americans traveled long distances to quarry Kineo’s stone, a white-specked green rhyolite that broke in sharp-edged pieces that could be shaped into tools and weapons. Wabanaki lore portrays Kineo as a fallen cow moose, slain by a hunter and turned to the same stone he’d used to make his arrowhead. Penobscot guide Joe Polis shared that story with Henry David Thoreau when they climbed Kineo in 1857. In The Maine Woods, Thoreau described what they saw: “There it was, the State of Maine — immeasurable forest for the sun to shine on . . . countless lakes — Moosehead in the southwest, 40 miles long by 10 wide, like a gleaming silver platter at the end of the table.” That view, like Kineo’s allure, remains almost unchanged. — V.M.W.

Maine’s tidal wetlands are full of serpentine streams, olive- and rust-colored marsh grasses, and refreshingly few human visitors. My favorite place to appreciate their quiet beauty is along the Eastern Trail, a bike trail and footpath through the 3,200-acre Scarborough Marsh, the state’s largest salt marsh. The trail overlooks the countless meanders of the Nonesuch River, where snowy egrets wade among the swaying grasses. On hot summer days, the local kids jump off a wooden-decked bridge into the cool, salty waters. I’ve been known to join them. — Brielle Hardy

I used to roll my eyes at the notion of watching the sunrise from Cadillac Mountain, which is, for about half the year, the first place in the U.S. to see the dawn. Then one summer, Down East asked me to go. Wearing my cynical face, I arrived on the 1,530-foot summit at 5:30 a.m. In the half-light, I saw dozens of people scattered across pink-granite ledges. Spread out before us was a landscape of lesser hills, the twinkling lights of Bar Harbor, and beyond that, the Porcupine Islands, nested in a low, thick fog. I took a seat on the rocks and watched as the deep-pink glow at the edge of the earth brightened minute by minute. Shortly after 6, there came a brilliant flash. Light spilled over the sea. Hand to my mouth, I gasped. “Oh my!” — V.M.W.

The old literature seems strangely silent on the grandeur of Maine’s fourth-highest mountain, until you realize nobody put a lookout tower atop Old Speck’s wooded peak until a couple decades into the 20th century. The earliest editions of the Appalachian Mountain Club’s White Mountain guide had little to say about “Speckled Mountain” other than it was hard to get to. But throw up 36 feet of steel scaffolding and voilà: one of Maine’s most dramatic 360-degree vistas, taking in the swells of the Mahoosucs and the jagged Presidentials to the south. But the real eye-popper is the view down into yawning Grafton Notch, with waves of green spilling down the mountain folds towards the twin ribbons of the Bear River and winding Route 26. It’s well worth the strenuous hike to the 4,170-foot summit (plus a few dozen rungs up a ladder). — Brian Kevin

Phippsburg’s Popham Beach is forever shifting, with each tide leaving a huge new sandscape to explore and the changing course of the Morse River altering the beach’s shape and size. Maybe the best thing about low tide at Popham is the sandbar access to Fox Island, a sea-swept crag just offshore. The view from the top takes in Seguin Island and its lighthouse on one side, a dramatic expanse of dunes and tidal streams on the other. Getting stranded out there when the tide comes in has always been a scary but slightly exciting prospect. — B.W.

In Maine, stay-awhile vistas regularly spring themselves on unsuspecting drivers. Caterpillar Hill, a crest on Route 15 between the villages of Blue Hill and Stonington, is one of the finest such surprises. My wife and I first happened there a decade ago, in late fall. Leaves were brown and dropped, but the sloping blueberry barrens were still a deep red, and beyond them, across Penobscot Bay, the sun was setting orange behind the Camden Hills. A photographer with a tripod and telephoto lens was the only other witness that evening. We’ve since stopped many times, most recently to pick berries with my in-laws, when we sprung ourselves on two unsuspecting teenagers making out in a beat-up sedan. The romance of the place is undeniable. — Will Grunewald

No matter how many times I make the trip, a surge of exhilaration rises inside me when I pass the turnoff for Mount Desert Island and continue Down East along Route 1. Traffic thins out. Tourist attractions fall away. The landscape turns raw and lonely. This is the Bold Coast, where wild blueberry barrens unfold in great, disorienting, treeless swaths and chaotic waters churn into standing waves, spouts, and whirlpools. In Eastport, you can have breakfast on the WaCo Diner’s deck while watching minke whales surface in Friar Roads. In one small state park in Lubec, you can visit a candy-striped lighthouse, explore a rare coastal plateau bog, and hike high over sparkling Quoddy Narrows. My favorite place is right here, the Cutler Coast Public Reserved Land, with its soaring cliffs gripped by a spruce and cedar forest. I rarely encounter other hikers. It’s just me, alone with the firs’ sharp, sweet scent, the waves’ ceaseless deep thunder, and the ocean stretching forever.  — V.M.W.

I checked the Knife Edge off my bucket list a few years ago, and I will not be hiking it again. The ridge connecting Katahdin’s Pamola and Baxter peaks (4,902 and 5,267 feet respectively) is just over a mile long, and if it got any narrower, it would vanish. The views, I am told, are fantastic. I wouldn’t know, as I was focused only on the path in front of me — or rather, the heaving scramble of sharp-edged rocks that gouged my shins at even the slightest misstep. I’d heard how the ridge is only 2 or 3 feet wide in some places, and how a strong gust could send a hiker over the side, so I’d expected to cross with some fear. I didn’t expect it to be the most mentally demanding hike I’ve ever set out on — or for it to take my friends and me nearly three hours to reach Baxter Peak. Once there, we took a few minutes to revel in our accomplishment, fuel up on sugary snacks, and gaze back at the undeniably magnificent stretch of mountain we’d come across. Then we strapped on our backpacks and began the long march downhill. — V.M.W.