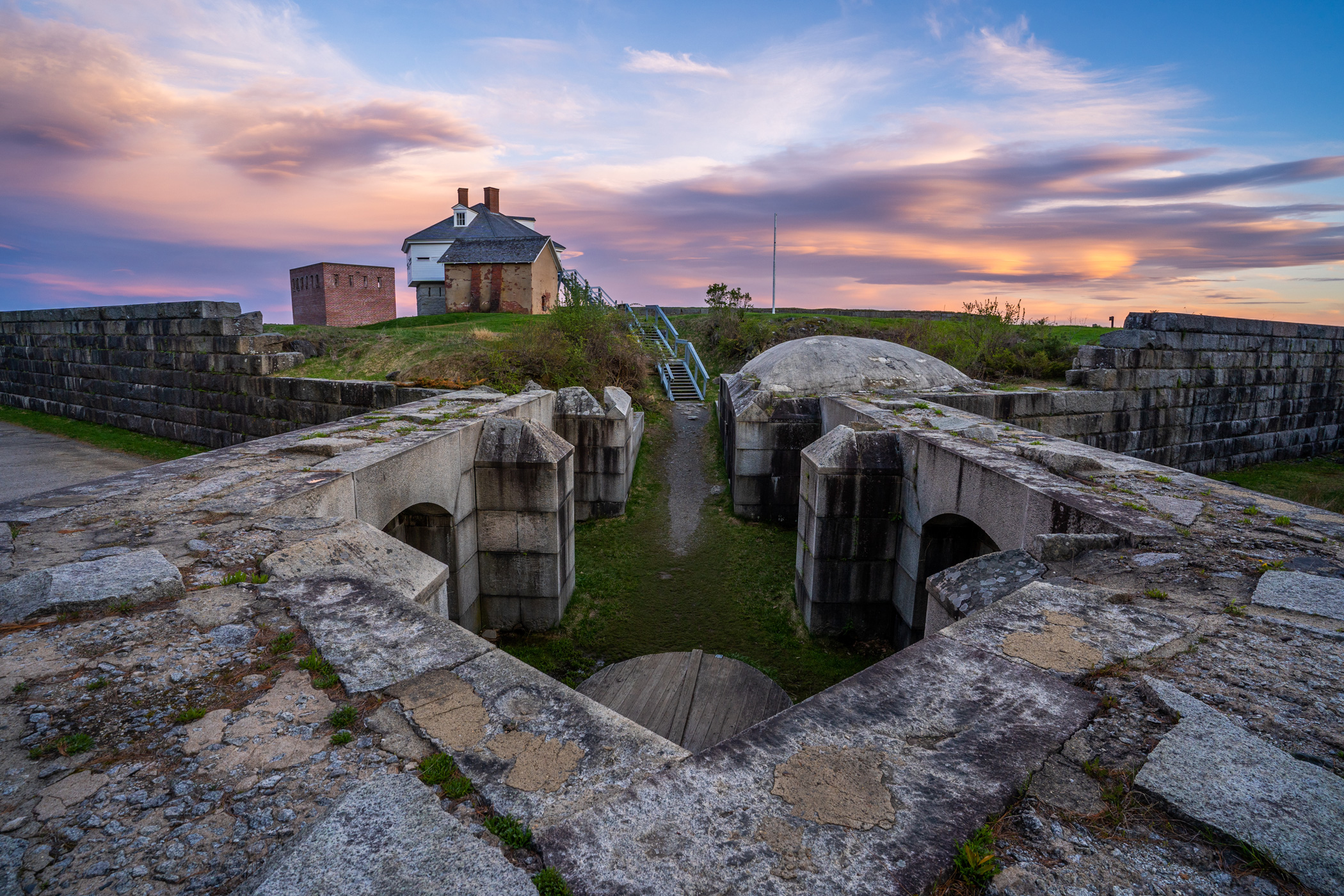 The view from atop Fort Preble takes in Fort Gorges and South Portland’s spark-plug–style Spring Point Ledge Light. During the Civil War, soldiers from the fort chased down and took captive 23 Confederate raiders who had snuck into Portland Harbor and stolen a Union ship. Today, the fort is on the Southern Maine Community College campus.

Left: The granite-block casemates of Fort Popham. The 19th-century fort never saw any action from its perch at the mouth of the Kennebec River. During the Civil War, the garrison’s commander was Augustin Thompson, inventor of Moxie soda. Right: Archways at Fort McClary. Just across the Piscataqua River from New Hampshire, on a site that has been variously fortified since the 1600s, Fort McClary bears the name of a New Hampshire native, Andrew McClary, who died in the 1775 Battle of Bunker Hill.

Left: The Cushing Island bluffs, from which Fort Levett guarded Portland Harbor during both World Wars. Middle: Completed in 1864, Casco Bay’s Fort Gorges was never manned, made immediately obsolete by ironclad ships and more powerful artillery. Right: This Fort Knox doesn’t hold a federal stash of gold, but it does have a priceless view of the Penobscot Narrows Bridge.

Built in 1754, Fort Western is the country’s oldest extant wooden fort. A Boston-based group of land speculators used the small redoubt, at the uppermost navigable point of the Kennebec River, as a supply depot for interests farther inland. It last hosted troops in 1775, when Benedict Arnold encamped there before invading Quebec.

Left: Looking out from inside Cushing Island’s Fort Levett. Middle: Inside Fort Popham’s stone walls. Right: The passageways at Fort Knox draw many a visitor and host a genuinely spooky haunted house every fall.

Built 156 years ago on a small rock ledge at the entrance to Portland Harbor, Fort Gorges sometimes looks like it’s struggling to stay afloat. Inside, one gets the same impression: much of the masonry is crumbling, and vegetation has stormed the ramparts. A couple of years ago, the city-owned fort landed on Maine Preservation’s list of endangered historic sites, and a developer proposed turning it into a commercial venue, complete with brewpub and lodging. Commercial development was roundly condemned in a nonbinding vote during a 2019 public forum.

Battery Steele’s guns had a 26-mile range, protecting the Maine coast from Phippsburg to Kennebunkport, including the nearby South Portland Shipyard, where Liberty Ships were built to supply the war effort in Europe. More recently, the overgrown bulwarks have hosted a semi-secret, occult-ish annual arts festival, Sacred and Profane.

Sunset from inside Fort Preble.