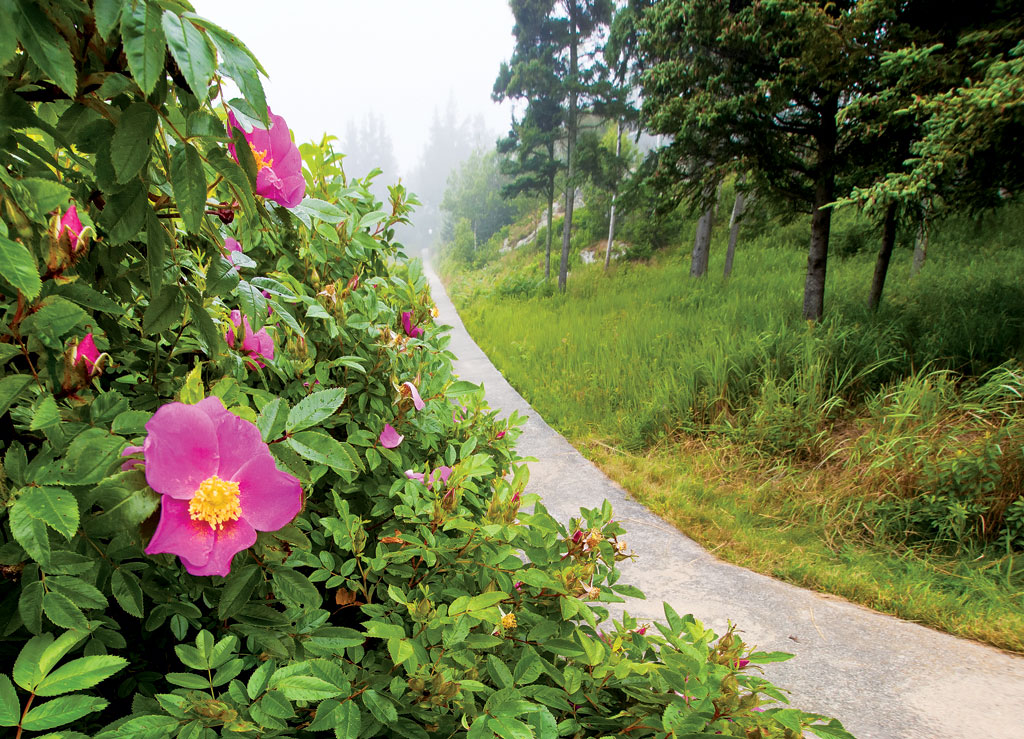 Or, my Rugosa just beat up your all-America selection

Life, writes biologist Lynn Margulis, is “a material process, sifting and surfing over matter like a strange, slow wave.” That arresting image comes to mind now and then when I stand on some raw stretch of Maine coastland, watching the swells pile up and then vanish in foam against the rocky shore. Such places can seem desolate, or at the very least inhospitable. You find yourself seeking out signs of life: traces of stubborn greenery or, failing that, bare stems and seed heads poking out among the rocks. If you persist, you will usually find some — and like as not, they will belong to a stand of Rosa rugosa, the wild beach rose.

“Wild” in this case does not signify native. Like other stalwarts of our landscape — tawny orange day lilies, for instance, and the vigorous western lupine that has overrun our similar but more demure Lupinus perennis — the rugosa is a resoundingly successful immigrant. Hailing originally from eastern Asia, it reached New England by way of Europe, where it was introduced in the eighteenth century. Naturalized colonies were reported on Nantucket in the late 1900s. It has spread widely by natural means (e.g., birds eating the fruits or “hips” and excreting the large, viable seeds) and by deliberate introduction, often as a means of erosion control.

You don’t need me, I’m sure, to tell you what to think about Rosa rugosa. As with most wildly successful things — cf. Beyoncé — a love-it-or-hate-it cloud enshrouds this plant. Opprobrious terms like “invasive” and “alien” pop up reliably in any Web search. Genteel gardeners, let alone devout rosarians, tend to regard it as something of a thug, especially in its ordinary, uncultivated form.

I had some neighbors once who set out to extirpate it from their yard. The battle raged for a couple of seasons — a rugosa’s root system, once established, is a pretty fair match for both armored and chemical weaponry — ending in a de facto armistice: The rose was driven back into godless redoubts that no other living thing would tolerate. And there, as far as I know, it remains to this day, awaiting its next big chance.

But then there’s the love side of the equation. One of rugosa’s great advocates in recent decades has been Allen Lacy, longtime garden writer for the New York Times. From his home ground on the sandy shore of New Jersey, Lacy found (like many of us in Maine) that rugosa thrived where more refined, pedigreed, and demanding varieties failed — to put this mildly — to live up to the breathless descriptions in garden catalogs. He experimented with named selections and hybrids: Blanc Double de Coubert (white and double-flowered, as the name suggests), Fru Dagmar Hastrup (light pink), Sarah Van Fleet (double, deep pink).

To this small list I might add Hansa, an upright, lilac-rose variety of striking scent that over time, unfortunately, becomes leggy and requires drastic pruning or outright replanting. There was a great stand of this in Rockport village for a while, but eventually it overwhelmed its dooryard garden.

From a purely horticultural standpoint, Rosa rugosa is a rewarding plant to know, in or out of the garden. Throughout the growing season it is the picture of health and vigor. “Rugosa” (English: rugose) means wrinkled, and even the baby leaves in early spring have a wizened, almost comical appearance. I’m not aware of any pest that attacks this species or any disease to which it is prone. (I’m sure you can find some in bad-news encyclopedias, but why go looking for trouble?) The flowers, mostly pink but sometimes white, five-petaled, three to four inches wide, appear in a flush in June, then recur intermittently until frost. The scent from a large, established stand can be heady and carries some distance on the breeze.

A single plant will spread steadily, even aggressively, by the roots, especially in the loose, sandy soil it prefers. (Good drainage is just about the only absolute requirement for success, along with sunshine. If you must fertilize, go light on nitrogen, which weakens the stems.) Flowers yield to bright red hips or fruit, up to an inch thick, that contain a tart but edible pulp rich in vitamin C. You can make a jelly or conserve from them — nutritious but otherwise undistinguished. Or you can leave the fruit to wither on the stem and provide winter sustenance for wildlife. En masse, the blackened stalks make a feature of sorts in the snow. The naked stalks are horrendously thorny, like something invented by Dr. Seuss, which you may regard as a feature or a bug.

For my part, I love rugosa — at a safe distance and in abundance, part of a landscape rather than a well-defined garden. I can’t imagine Maine without them.

Richard Grant is a Down East contributing editor and novelist residing in Lincolnville. His most recent book is Another Green World.