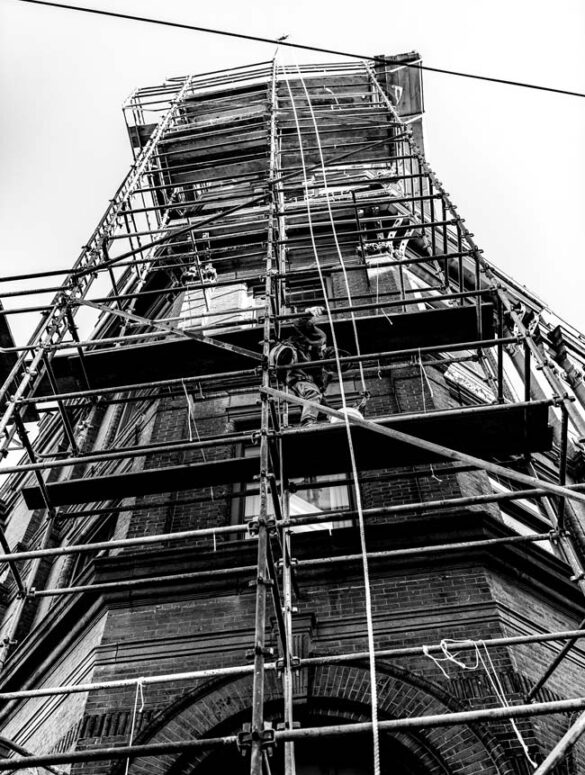 The pandemic left Portland's streets quieter than usual last fall, when Séan Alonzo Harris set out to capture a ground-level portrait of a buzzy city at an inflection point, taking stock at the end of a strange and sometimes turbulent year.

Above: Scaffolding obscures the brick tower of the First National Bank Block, on Exchange Street, a Queen Anne–style landmark in the Old Port. Since 1884, a weather vane atop the tower has shown which way the wind blows in the heart of Portland.

“I first moved to Portland in 1996 to go to Maine College of Art, and there was nothing here. I came back three years ago, and then, right before the pandemic lockdown, I opened my own retail storefront. I was freaking out, but I adapted to doing less profit-driven and more collaborative work with nonprofits and creative groups, and it’s not only kept me busy, it’s opened me and my work up to new organizations and people. Compared to the ’90s, the energy of the city is so much better and the creative community much more supportive, especially now. We are all donating to each other, helping to keep our creativity going.”

“I remember when I showed up here in 1990, my uniform on, just retired from the army. I was 39 and trying to get a job in medical administration. I saw only a couple of Blacks, maybe two people from Somalia, no other people of color, and the hospitals just weren’t ready to take me on. I waited for the call that never came, so I opened my own business, and it just grew. Now? In one day in the shop, I interact with all kinds of different people, and eight out of ten come from different cultures and walks of life — and not just Black or white. It’s exciting. We have coordination and diversity, and the love is here. In this community, in my business, we bring everyone together and let them be who they are, working together.”

“Nice people, quiet city, the best city in the summer. I moved here in 2014, from Iraq, and in that time, the downtown has become much busier. I work two jobs, and I’ve seen the city grow up, more places start to open. Since the pandemic, however, everything has changed. No more shop talk in the store, we can’t go where we want, and that is different. Yet there is still a feeling of being together. Maybe even more so. At the grocery, because we do food and takeout, we have so many supporters who are loyal and push us up. The city might be different, but the people are the same.”

“I’ve lived in Portland the last 12 years and watched a lot of businesses come and go. Seen things get built up and changed. Some restaurants I used to frequent, I kind of understand why they didn’t make it, but the pandemic has driven out a lot of folks who shouldn’t be out of business. At my place, we regularly served 100 to 120 people every weekend night. Now, it’s something like half that on a good night. I also play in a band, and without live entertainment and places to go, it starts getting hard to justify paying what people need to pay to live in the city. But I’m an optimist, so I’m feeling good about summer. For now, I’m staying in town, and we’re open, and my band is working on a plan B so we can keep playing.”

“I got married and came to Portland in 2009, and I’ve worked in the store since. I loved Portland then and still do. The air is so clean, no pollution. People always smile and say hello, and since the pandemic, I see more customers helping each other, visiting each other, bringing food to other people. Some of my family and friends talk about moving to a warmer place, but I never will. I want to stay in Portland the rest of my life. Maybe go back to visit Thailand once in a while, but I’m a country girl — I don’t like big cities with lots of traffic. Portland is getting more crowded, but it still feels very clean and safe to me.”

“I was born and raised in Maine. Portland used to be a pretty tough place. Lobstermen and fishermen kind of owned the town when I was a kid, and there were places I wouldn’t go. Now, it’s so pretty and open and diverse, but that’s also a catch-22. More development, traffic, crowds — it’s been good for business but hard on locals used to having the place to ourselves after summer. I used to surf any beach and see no one; now, Higgins is one of the most crowded breaks in the Northeast. The next few months will be a test. There’s a new “for lease” sign up every day. Small businesses and restaurants make Maine what it is. They’re why tourists come and folks from down south move here. But without real financial support, many of us aren’t going to make it.”

“I moved from Richmond, Maine, where I think I was the only Black or brown person I saw on any given day, so immediately, Portland felt more diverse. Not as diverse as where I grew up in New Jersey, but getting there. And then, this summer, even with the pandemic, there was this energy that came with the protests and marches — a pulsing, throbbing energy that went through the city and was incredible and, at times, even a little scary as the events of the rest of the world just opened the floodgates. It was as if we all simultaneously came to the realization that Maine is not an island. Portland is not a sleepy little city isolated from the rest of the world. We are a part of something larger. It is real, and it is happening.”