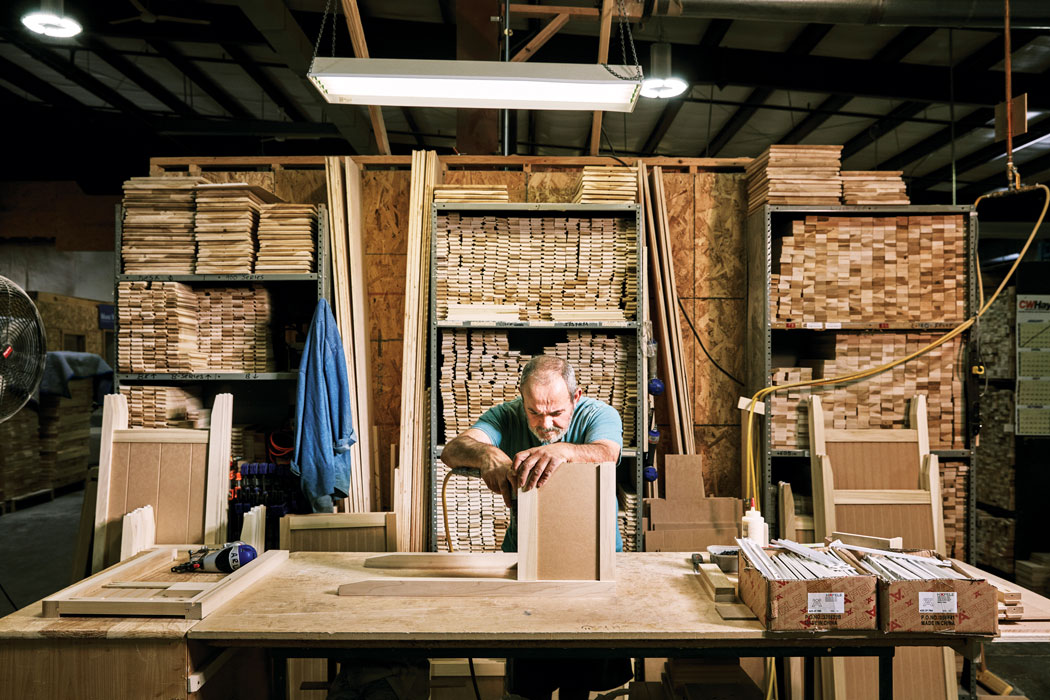 [dropcap letter=”T”]he air inside the cavernous, 14,000-square-foot Maine WoodWorks factory seems to quiver with the whine of table saws biting into wood. Sawdust swirls on the concrete floor like a fine dusting of snow. Beyond the shoulder-high stacks of pungent pine and poplar, men and women bend over workbenches, checking order tickets as they build beds, chests, and tables according to customers’ specifications.

Using panels with playful cutouts, a variety of knobs and feet, and nearly 40 luscious paint colors, the 16 employees of Maine WoodWorks craft furniture in the classic cottage style that has been identified with Maine for decades. Maine WoodWorks isn’t the only shop to make it, of course, but what sets this Saco manufacturer apart is its mission: half of its workers are affected by disabilities, and all of its earnings support programs run by its nonprofit parent enterprise, Creative Work Systems (CWS).

The organization’s roots stretch back 49 years to an association created by parents of children with disabilities. “There’s a full life in having a job where you can work for many years, get to know your coworkers and make friends, and bring a paycheck home,” says Jim Houle, a Portland lawyer who serves as vice president and secretary of CWS’s board of directors. Houle’s parents helped found the organization as a way of providing opportunities for his brother, John, who has a mild intellectual disability. With multiple offices in southern and central Maine, CWS today offers housing, jobs, personal skill development, and other opportunities for hundreds of Mainers with cognitive, physical, and psychiatric disabilities. Some of those individuals find their niche in CWS’s agricultural, culinary, and art programs, but the woodshop provides CWS its biggest returns. With annual revenues of about $1.25 million, it generated nearly $190,000 last year to support its programs, from case management for individuals and families to community day services to career development.

“Maine WoodWorks started out as a way to employ people,” says Margaret Logan, marketing manager for CWS, “and along the way, it became a strong, viable business in an industry that is tough.”

The woodshop began in 1988 in CWS’s facility on Lund Road in Saco, first packaging small parts and then building unfinished pine furniture. “The unfinished pine churned along, but it was very difficult to make it work from a profitability standpoint,” says shop manager Dave Gallati, who sold his own woodworking business in Vermont in 2001 and moved to Maine to help design and launch the Maine WoodWorks cottage furniture line. The products were inspired by the success of Maine Cottage Furniture, which popularized colorful coastal-style furniture nearly three decades ago.

With details like cannon-ball bedposts and beaded and barn-board panels, Maine WoodWorks furniture is evocative of summer vacations on the coast or in the country. “We are very popular wherever there is a body of water, a lake, along the coast, second homes, vacation homes, camps, and ski chalets,” Logan says. “Now, as we are making our way in the world and people are learning about our mission, they are responding.”

That’s what sealed the deal for Brunswick children’s author Cynthia Lord, who bought her first piece, a dresser, at a Bath furniture store. Lord, who has an adult son with autism, was initially attracted to the furniture’s good looks (“They were gorgeous,” she says), but she was sold on the company’s mission. “It highlights what the workers at Maine WoodWorks can do,” says Lord, “and so much of the world focuses on what they can’t.” She was so excited about her second purchase, a sage-green hutch with glass doors, that she shared a picture of it on Facebook.

Since moving to Saco’s Industrial Park in 2005, Maine WoodWorks has grown steadily, with a 20 percent jump in production last year. Wholesaled to retailers across New England, pieces are made to order, so there is no stored stock. The pine comes from Robbins Lumber in Searsmont, the poplar from New York or Pennsylvania. “If we can’t get it in Maine, we try to get it as close to the shop as possible,” Gallati says, “and all of our coatings are water-based, low-VOC, environmentally friendly.”

On a recent afternoon, the shop is in full swing. Wearing sawdust-covered shorts and a T-shirt, senior woodworker Bill King is putting together a bed. “The mission is rewarding,” says King, who has worked for CWS for two decades. “When you come in, you don’t notice anything different [about the workforce]. We all just join together.”

Tina Stevens, a young woman with sandy hair and glasses, smiles when asked what she likes about working here. “Getting paid,” she says. She runs her hand over the rough surface of a narrow drawer front. “Feel that?” she says. Next, she picks up a piece she’s just sanded. “Now feel this: smooth.” Chipped nails cupping a rough sanding block, she carefully guides the wedge over a beveled edge.

Behind pallets stacked with dresser drawers, Joe Gendron cuts dovetails for a drawer, then taps the sides together with a rubber mallet. Gendron, whose gray beard is speckled with sawdust, says he can build 15 to 20 drawers in an hour. After 12 years, he’s done nearly every job in the place. He’s grateful, he says, because he gets to work with his hands.

With other skilled workers cutting panels and spraying primer and paint, the shop turns out 3,200 items a year. Now, it is preparing to expand again in 2017 by investing in its infrastructure and launching a new marketing campaign to emphasize its mission as a business that’s as concerned with transforming lives as transforming wood. “At the end of the day,” Jim Houle says, “it’s about growing the spirit of the people who work here.”