York's Cherie Herne turned her passion for beachcombing into a business. 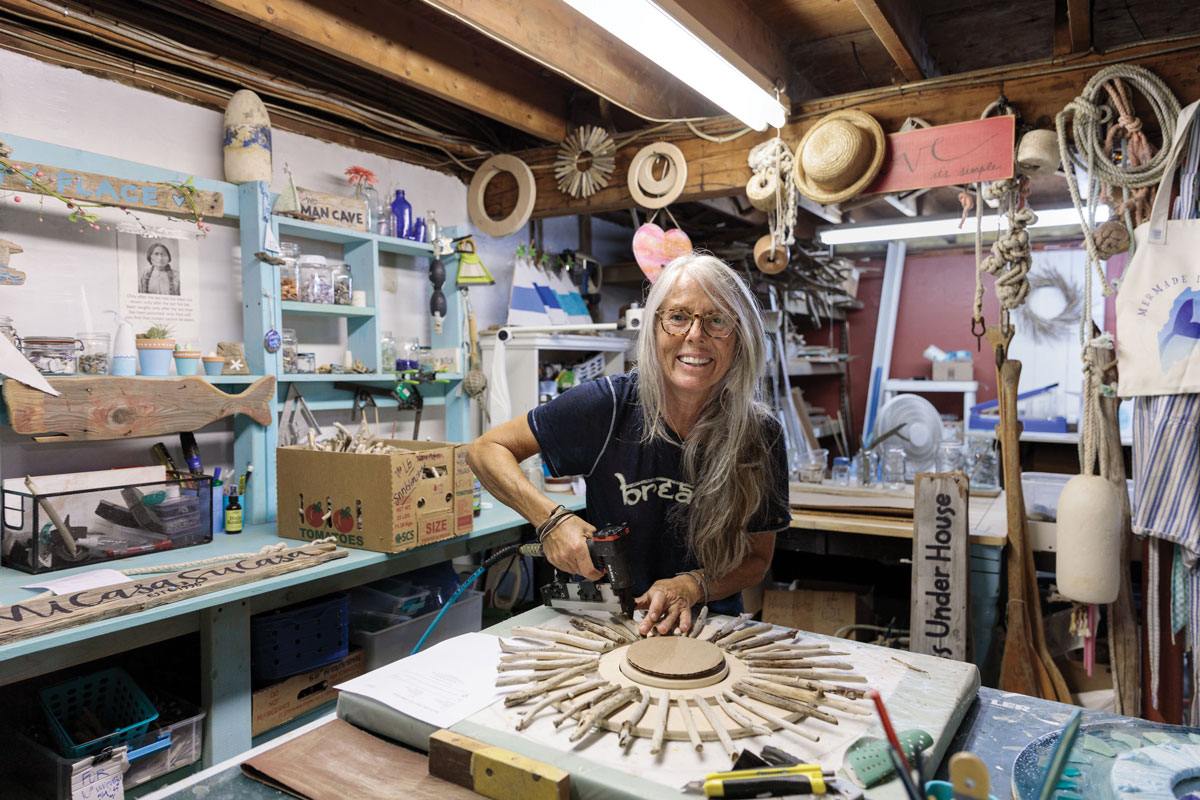 The best beaches, Cherie Herne says, are the hidden ones. On her paddleboard, the eighth-generation Yorker accesses remote shores near her home, with her Chiweenie dog, Piggie, perched on the nose in a mermaid life jacket outfitted with a handle for when the pup slips into the water. Which happens a lot.

On the sand, Piggie scampers while Herne fills her frame pack — at 4 feet tall, it’s nearly as big as she is — with ocean debris: pre–World War II lavender sea glass, blue-gray “wishing” rocks ringed with white quartz, hunks of broken ceramic, impossibly snarled bundles of nautical rope, and loads and loads of driftwood. Such are the days of “Salty Girl,” which is what Hernecalls her online shop for the creations she constructs from her “treasures.”

But it wasn’t always this way. Although Herne grew up with free-spirited parents — her late father, Bobby Herne, was a well-known guitarist — by 2014, she found herself tied to a computer as a graphic and web designer. Her body ached and her mind wandered. That year, she was diagnosed with Lyme disease, which she thought might account for some of what she calls “fire in the brain.” Seeking relief, she consulted with a business coach who helped her realize that daily beach walking might be the antidote.

Hundreds of beach days later (she’s missed only a handful over the years), Herne is now a master of the Maine-coast aesthetic. She spends her days scouring the shore for materials. Her nights are devoted to transforming finds into all manner of creations, from hand-painted signs on wooden paddles to made-with-driftwood fish, curtain rods, sailboats, handrails, miniature Christmas trees, and — her best seller — carefully arranged wreaths accented with glass and brick scavenged from the shoreline.

“Every day is an adventure,” she says, “and every day is about making something different.”

What most attracts people to your creations?

The people who buy my work love Maine or know somebody who loves Maine. Maybe they vacationed here or grew up spending summers here and haven’t returned for a long time. One customer used to come as a little girl to visit her grandfather. Ordering things like sea glass or a beach brick the size of her fist brings her back to those days. It’s cool that I can give people just a little bit of the Maine beach for their very own.

Do you have any tips on finding great stuff at the beach?

I go where people aren’t. Near rocks, for example, where the sea doesn’t come in straight, the waves can push things to either side and leave behind treasures as they recede. And I always go at low tide.

It takes so many years for a piece of wood to get really rounded and sun bleached, coming in, sitting in the sun, then going back out to sea and getting tumbled around again and again. I also like finding wood from boats or buildings. I’ll see old screw holes and rust and wonder about its history: Where did it come from and how long has it been out there?

What’s the coolest thing you’ve ever found at the beach?

I once found three whale vertebrae in a single day. That was a really big score. One of them is on my mantle; it looks like a keyhole. There’s a giant one in a bag in my studio and another one on a shelf in my storage unit. My intention is to make something with them, but I’m not sure exactly what that could be. Maybe I’ll put driftwood around them or hang something with them. I don’t want to sell them. I want to make something that I would keep.