The Elves of the North Woods 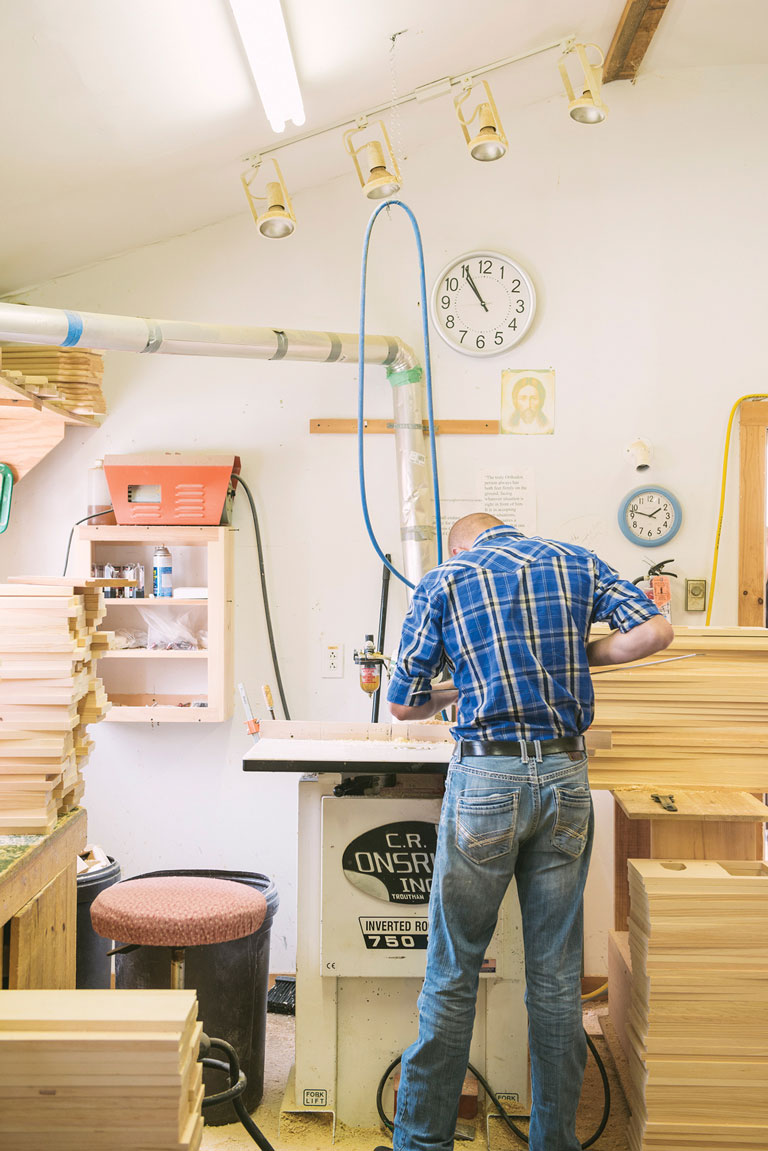 A family handcrafts toys designed to last a lifetime.

Head Elf. It’s the kind of title a child might imagine having on a business card as a grown-up, maybe in a world where toys are still made with wood and hammers and painted by hand — a world we quickly suppose to be nonexistent when we reach a certain age.

But David Smalley really is a head elf. He looks the part, too — it’s hard to miss the impish twinkle in his bright eyes, though they’re all but engulfed by a bushy fringe of hair, beard, and eyebrows. And Smalley’s workshop really is a place where simple wooden toys — thousands of them — are made lovingly by hand.

More officially, David Smalley, 64, is known as the owner of Elves and Angels, the toy company he and his wife, Susan, began in 1988. Their line of wooden play kitchens, castles, doll furniture, dollhouses, and play stands is now sold at 35 brick-and-mortar stores and about 100 online retailers nationwide. They’ve earned a loyal following for their long-lasting products, their lifetime guarantee, and — most important — their stalwart opposition to the disposable nature of most 21st-century toys.

Smalley’s mission, he says, is to “create something that actually lasts from generation to generation.”

“When I was young, my grandmother and my wife’s mother had refrigerators and stoves in their homes, and they had one for their whole life,” David says. “But now you throw refrigerators away every three or four years. It’s that way in everything. We’ve gotten so loose with any responsibility to create something that actually lasts from generation to generation. I really didn’t want to do that at all.”

For the past 26 years, he’s stayed true to his word. The Smalleys regularly receive notes from fans who see a well-loved Elves and Angels product on Craigslist or at a yard sale — proof that their toys have lasting power far greater than the length of just one childhood.

And even though Smalley didn’t start out as a toymaker, it seems an oddly perfect destiny for a fourth-generation woodworker with a family of 12 children. Back in the 1980s, when the Smalley family lived in Scarborough, David was a remodeling contractor. Business slowed, however, and the onset of arthritis made it difficult for him to continue that type of labor — and so he got to thinking about a new line of work.

“My wife and I had already done quite a bit of toy making because we have such a large family,” he says. “We used to make a lot of toys at the Christmas season. That’s where the idea actually came from.”

So in 1989, David and his eldest son, Jacob, made for the New York Toy Fair to represent their fledgling family business, toting along a line of toys all named after the Smalley children. Though their wooden play kitchens were a unique item at the show, the initial response from buyers was lukewarm. “We took some orders at the show and we headed home and said, ‘Well, it didn’t really work.’” Or so it seemed.

Two weeks later, the phone started ringing — and ringing and ringing. The family got to work and they haven’t stopped since.

Each Elves and Angels toy begins with Maine wood, sourced from a lumber mill just outside of Bangor.

Before long, Elves and Angels had set up stores in both Scarborough and South Portland. Eventually, however, David and Susan decided to reduce overhead by moving north, to a fixer-upper farm in Wytopitlock (about 50 miles east of Millinocket). A devastating fire in 2004 wiped out the entirety of the workshop and its inventory, but both family and business have rebounded with vigor in the 10 years since.

Today, as always, each Elves and Angels toy begins with Maine wood, sourced from a lumber mill just outside of Bangor. It’s delivered to the Smalley residence and immediately stored in a temperature- and humidity-controlled section of the workshop. Each piece then travels through a series of rooms, each providing further refinement of the raw material: first milling, then the drill press, then sanding, and, last, finishing with a natural food-grade linseed oil. Finally, the parts are sent to the packing room, where each toy’s unassembled parts are readied for shipping.

It was 2006 when David began to worry about the impact of his products on the environment — namely, that shipping large, assembled toys called for lots of trucks, lots of gasoline, and a lot of wasted packing material. So he began to transition the entire product line to flat packing, a practice by which products are shipped unassembled in order to fit the smallest and flattest containers possible (think IKEA).

Flat packing has thrown the Smalleys some logistical challenges, to be sure. For one, every product had to be redesigned to meet the new standard, a shift that dragged over an arduous two years. And, to provide customers with toy assembly guidance from the head elf himself, David produced a series of instructional DVDs that ship with each product.

But the long-term gains, David explains, have already outweighed the brief production hiccups. He estimates that the change has lessened the company’s environmental impact by 50–75 percent. It’s kept prices impressively low, too. In 1989, Julianna’s Kitchen sold for $199 plus shipping. Now, it sells for $179 with free shipping.

As the business has changed, so has the Smalley family. Today, the clan has spread all across the country. David and Susan’s 12 children range in age from 17 to 43 (and their brood of grandchildren already exceeds 20). Though each of the Smalley children has at one point lent a hand to Elves and Angels, only five are employees today. Two of David’s daughters, Suzanne and Julianna, have even launched their own businesses as a result of their hands-on education in the workshop.

“My dad is the most impressive person I know,” says Julianna, now 26. “I have grown up watching him hear about someone who is in need or suffering loss, and he will instantly ship off some kitchen, dollhouse, or stable to them. People often contact him and ask for help, and I have never known him to turn them down. ‘It’s who we are,’ he’ll say. That is one of the reasons I feel he has been so successful.”

That spirit of generosity comes full circle when the head elf gets a chance to comb through each new batch of photos and emails sent by the families who have loved his toys for so many years.

“I really want both parents and children to see the love of a job well done coming through our entire product line,” David says. “And to see people still delighting in something that we did a long, long time ago — I just feel like we’ve done something worthwhile.”