They Know The Ropes 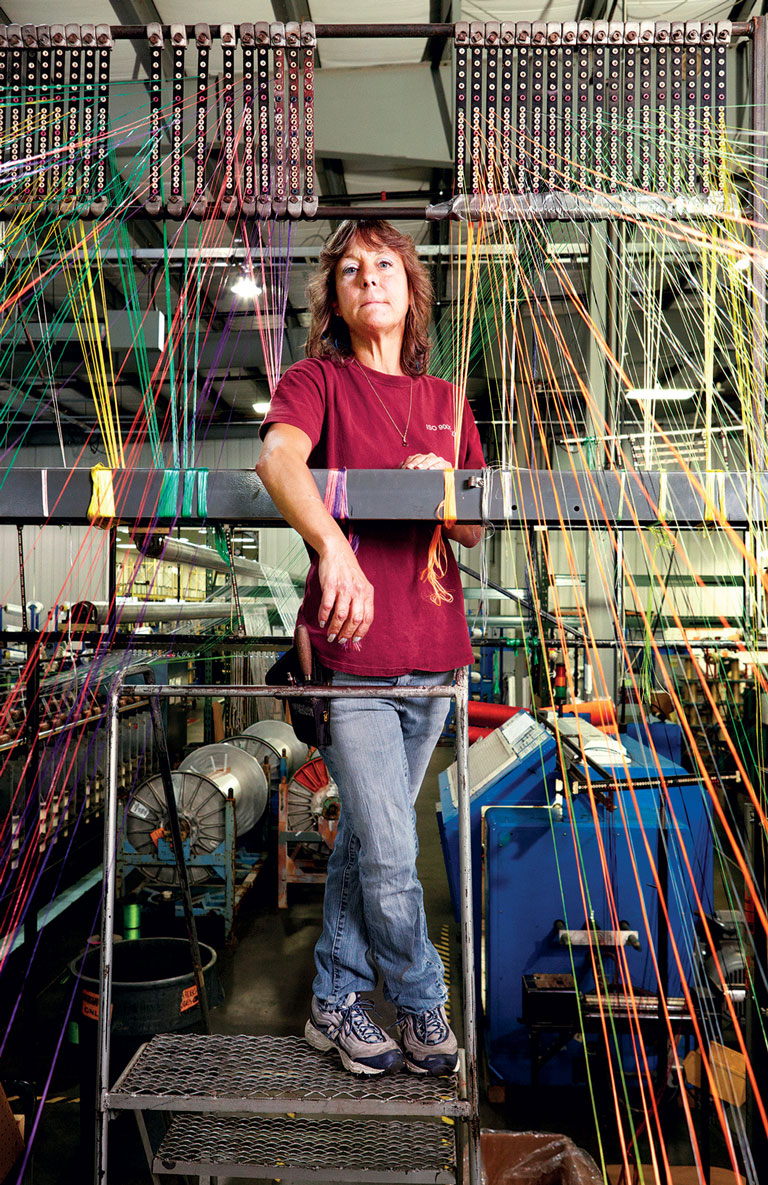 From its earliest days supplying nylon lines for lobster fishermen, Saco’s Yale Cordage has expanded its market to include everything from America’s Cup yachts to America’s space program.

And you thought all rope was the same! Yale Cordage designs and manufactures dozens of ropes for specialized uses. Arborists use them to climb trees and lower heavy branches, and soldiers rely on them to drop safely from helicopters into military theaters around the globe. The company even used sharks to test the strength of Tsunami Warning System buoy lines.

From an industrial park in Saco, this specialty-rope maker has gained a hold, as Putnam points out, “on every continent in the world.”

But even as it has built an international reputation, Yale Cordage has retained the character of a small Maine business. Take the bag that Yale’s highly sophisticated rope comes in. One end of the rope sticks out through a hole, with a note attached.

STOP! the note commands, in big red letters. What follows are simple directions for taking the rope out of the bag tangle free. “Removal by other means will create a mess and make you angry,” the instructions conclude. The note is signed by CEO Tom Yale. And there’s a PS: “Thanks for buying our product.”

It’s not a gimmick that some marketing department dreamed up. The big red warning label came from the CEO himself. “Tom developed that thing,” Putnam says. “It’s attention-getting. Now people read it, and they understand that if they do it this way, they’ll have success. If they don’t, they won’t.”

Yale Cordage has been anchored in a bedrock of practicality since O. Sherman Yale, Tom Yale’s father, founded the company in 1950. DuPont was actively seeking postwar markets for its new synthetic fiber, nylon. Sherm, who had worked as an acquisitions manager for a thread manufacturer, saw an obvious one in Maine, where the family spent its summers. “The lobster-fishing industry, up until that point, had used a natural linen twine,” Yale says. “Typically a lobster trap would not last a season. Nylon, potentially, would outlast the trap. So [Sherm] bought a braiding machine and set it up in our basement in Gastonia, North Carolina.”

Along with his understanding of cutting-edge fiber technology, Sherm also showed a deft grasp of old-fashioned customer relations. Veteran lobster fishermen had traditionally used tar to extend the life of their lines. So Sherm tarred his new nylon lines, even though, as Yale says, “it was of no use to the fiber. But too much change wasn’t going to be accepted.”

Yale Cordage still has to negotiate that fine line between preaching innovation and respecting tradition.

The universal mindset is: ‘Rope is rope is rope,’ Yale says. But when rope is twice the tensile of steel in the same diameter, it’s not just rope anymore.

It’s easier to convince people to make the switch from steel cable to synthetic rope when there are obvious safety advantages. Most utility repair crews have made the transition, for example, because synthetics are less conductive than steel — when kept dry, in fact, they’re not conductive at all.

“We made that change many years ago,” says Gerry Breton, safety director for Portland-based Lucas Tree Experts, which has been a Yale Cordage customer for more than 15 years. “We no longer use steel-core lanyards. We use all-rope lanyards. Yale Cordage didn’t necessarily drive that change, but they provided an alternative that was equal to or greater than what steel slings or steel-core rope could provide.”

In addition, “the weight [of synthetic rope] is a lot less than a steel cable,” Breton says. “We have hundreds of different ropes that we use in the field every day, from climbing lines to pull lines, for pulling trees over. And Yale Cordage is always willing to work with us when we have a special need that requires some R&D. They have a great test facility.”

Although the specifics vary widely, the process of developing specialty ropes for new markets is the same in every case. “There’s a basic palette of probably a dozen fiber types,” Yale says. But each of those dozen basic types can have as many as 30 varieties.

“Generally speaking, we listen to the customers [describe] what the product is going to be used for,” Putnam says. “And then we just look to the founding essence of the company. We take whatever materials can be found out there on the market and combine them with product needs, application needs, and safety needs.”

When the National Data Buoy Center began losing more buoys from its Tsunami Warning System than its budget could sustain, NOAA turned to Yale Cordage for help. After determining that damage from curious ocean predators had contributed to the losses, Yale Cordage added strategically placed lengths of extra-strength rope to the lines, which are almost a mile long in some cases. They tested the new rope, called Shark Byte, in a tank full of bull sharks at the Oklahoma Aquarium.

If you think that sounds suspiciously like a publicity stunt — well, go ahead and call bull shark. Putnam defends the process (“It seemed logical to see how [the rope] performed when a shark bites it.”) and says that, in many cases, Yale Cordage has to invent its test procedures on the fly. They’ve never had to fly higher than the time NASA came to them about developing a highly specialized sling. “When they sent the concept in,” Putnam says, “we assumed that they had already put some work into the [design]. But really it was just a fancy napkin sketch. The reality was that they didn’t know if it could be done.

“This was the best and brightest NASA engineers. And they were looking to us. So we developed a jig, got them the information they wanted — and this thing is now in prototype.”

NASA isn’t the only client whose specs can be mind-bendingly esoteric. The suspension ropes for the SNOLAB neutrino observatory, located in a mine more than a mile underground in Sudbury, Ontario, had to survive in ultrapure water — which is ultrapure hell to work with. “Ultrapure water is like a sponge,” says Yale. “It wants to pull minerals out of whatever you suspend in it.” Not even Kevlar, the stuff used in bulletproof vests, could provide an adequate service life in ultrapure water. So Yale Cordage ended up using something called Vectran liquid crystal polymer fiber.

Developing each new specialty rope is like solving a high-tech brainteaser. “I’m still challenged every day,” Yale says, “and I’ve been at this for 44 years.”

Putnam is a relative novice; he’s been at Yale Cordage just 20 years. And he still approaches his job with a newbie’s enthusiasm. “The most fun,” he says, “is getting in front of somebody who doesn’t realize you can solve a problem that they have.”