A Readfield artist's two-person card game allows its players to battle like gladiators, using their wit and the cards they've been dealt. 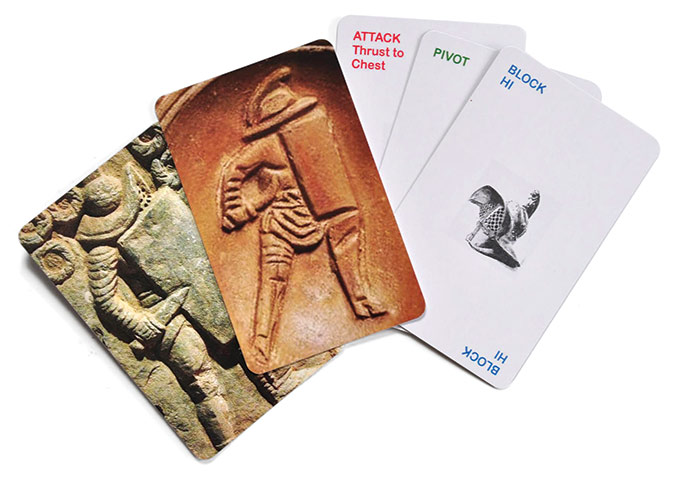 When David Matson was 14, his dad gave him a book about gladiators, and soon he was envisioning a game inspired by the Roman combatants, one where players battled with cards and dice in lieu of swords and shields. Last fall, Matson, now 59, finally put the finishing touches on his two-person card game, Gladiator: Fight to the Finish.

“Part of the creative process is that there are times that things need to sit around,” he says. “You don’t see the next stop. You have to let the art tell itself.”

Matson is an artist and ordained priest who found himself with extra time for creativity in 2019, after the church where he served as a rector reduced staff on its way to a closure. Since he was a kid (and with greater focus since the ’90s), he’s created what he calls “found-object interactive sculptures,” toy-like art machines meant to be manipulated and played with, built from garage-sale, flea-market, and roadside finds. His recent work includes “Meaning Fabricators,” occult-ishly decorated cigar boxes turned into something like marble labyrinths that reveal answers to questions, like a Magic 8-Ball. Matson’s art, which he’s shown and sold at galleries and art fairs, explores the intersection between play and creative meaning, and he’s long enjoyed making and playing games.

Backers on Kickstarter helped him raise more than $5,000 to produce 250 boxes of Gladiator: Fight to the Finish, which he’s now selling online. The game’s rhythm is meant to imitate swordplay, with players laying down cards to thrust, lunge, feint, and ultimately slaughter their opponent. Our fascination with the brutal ancient practice, Matson says, made it a natural subject for a tabletop game.

“Everyone has heard of gladiators and somehow finds them intriguing,” he says. “Playing the game can be a way to enter back into this activity that the game represents.”

Without, you know, getting a saber in the abdomen.