For 20 years, Cape Elizabeth’s Beach To Beacon 10K road race has attracted some of the world’s most elite runners, with locals opening their homes to host them. Photographer Tristan Spinski offers an intimate look at the fond, poignant relationship between hosts and guests.

Before his houseguests arrived, Mark Cook researched Ethiopian etiquette online: make eye contact while conversing, speak softly, talk about family. When he discovered his guests liked pita bread, he bought an assortment of brands, so they’d have choices. The volunteer host wanted to make the two elite runners comfortable during their stay at his home for the TD Beach to Beacon 10K road race.

Founded in 1997 by Cape Elizabeth native and gold medalist marathoner Joan Benoit Samuelson, the Beach to Beacon has become a seemingly unlikely venue for the world’s top runners. Last year’s race from Crescent Beach State Park to Portland Head Light drew 6,336 athletes from 15 countries and 43 states. Aside from the scenery, the draw for pros is the purse — more than $90,000 awarded across various categories. This year’s 20th anniversary race is on August 5.

Mark, who lived in Cape Elizabeth during last year’s race, hosted Markos Geneti, the Los Angeles Marathon record holder, and Tariku Bekele, who won bronze in the 10,000-meter in the 2012 Summer Olympics. Home stays are a big part of what makes the Beach to Beacon unique: a reliance on community, a down-home approach that finds world-class athletes casually bunking with everyday Mainers.

“We like the idea of doing our small part to welcome people,” Mark says, “and have them experience the culture and goodness of Maine.”

Tariku, center, and Markos arrive at the Portland bus terminal on an August evening after making an 18-hour trip from Ethiopia. Mark’s girlfriend, Cathy Nugent, of South Portland, was in the crowd too, awaiting her guest, Wude Ayalew, also of Ethiopia and winner of the women’s race in 2015. Cathy had proposed the idea of hosting the athletes.

During dinner at Cathy’s, Mark offers a toast to the guests. The night before, as the pair planned the meal, he had said, “This is what America is all about — opening your home.” 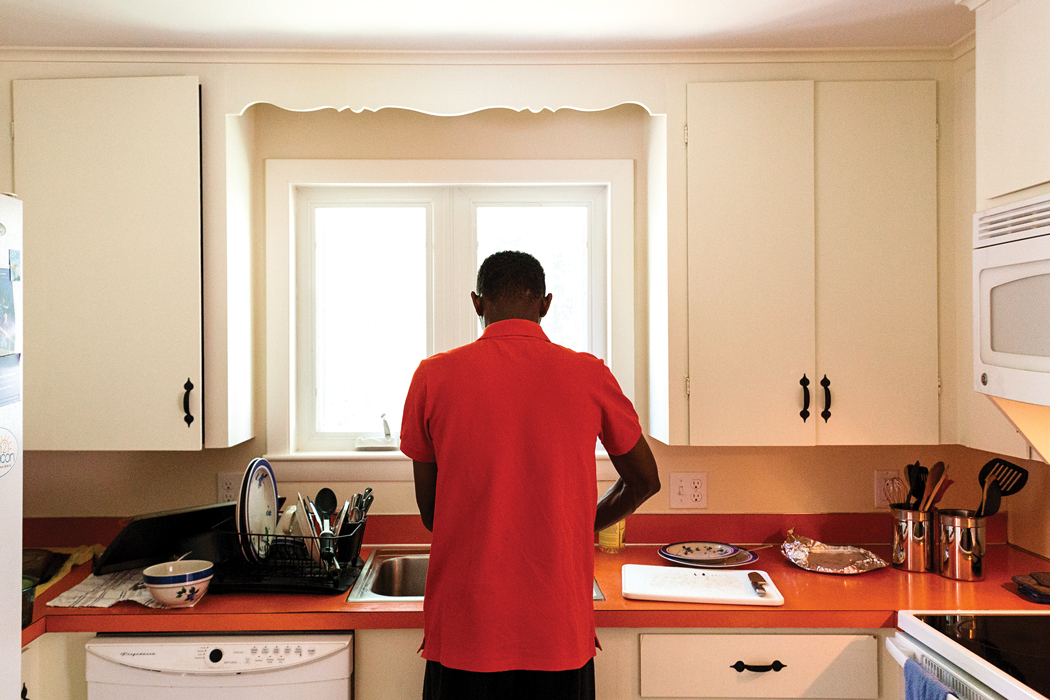 After breakfast at Mark’s, Markos insisted on doing all of the dishes, even at the risk of making the runners late for the press junket in Cape Elizabeth. When he’s not training, Markos is a police officer in Ethiopia. Athletes in Ethiopia are sometimes rewarded with government jobs and flexible schedules, which confer economic stability and allow them to devote more time to their training.

“What can I do to help them be successful?” Mark had asked himself. He and Cathy wanted to make sure their guests were well fed — and with the right foods. After some research and second-guessing, they settled on a menu void of condiments and full of carbohydrates (pita bread), protein (mostly chicken and eggs), vegetables, healthy fats, and fresh fruit.

At the pre-race press junket at Inn By the Sea, Wude Ayalew snaps photos of Markos and Tariku as they get sports massages. 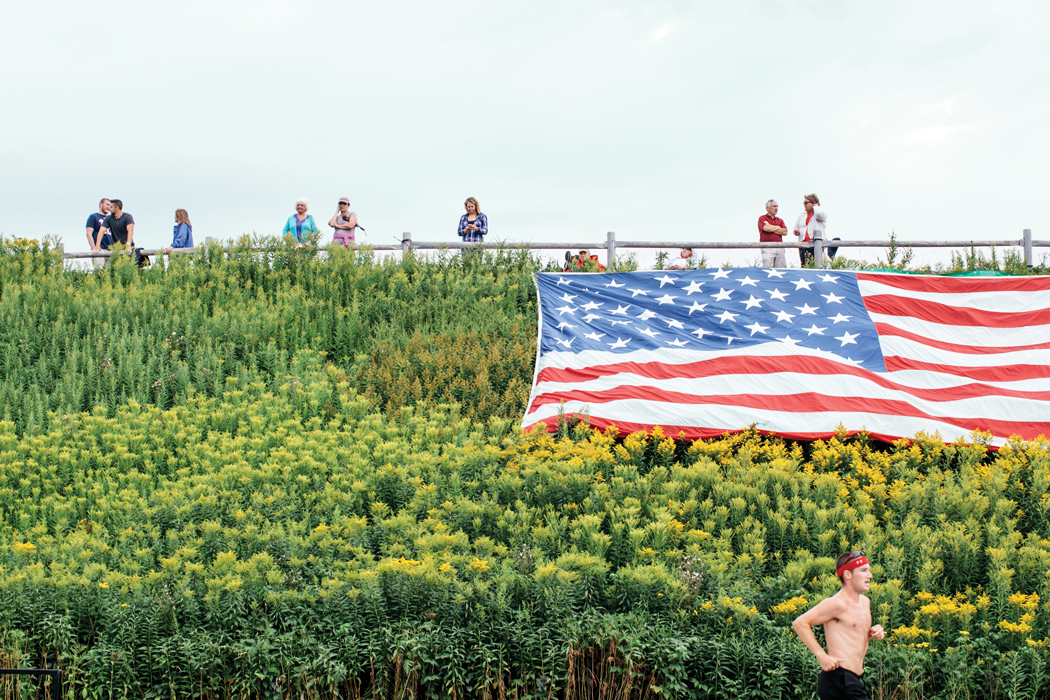 A runner passes by an American flag on the side of the hill at Fort Williams Park in Cape Elizabeth. The race attracts thousands of spectators, many of whom gather here. 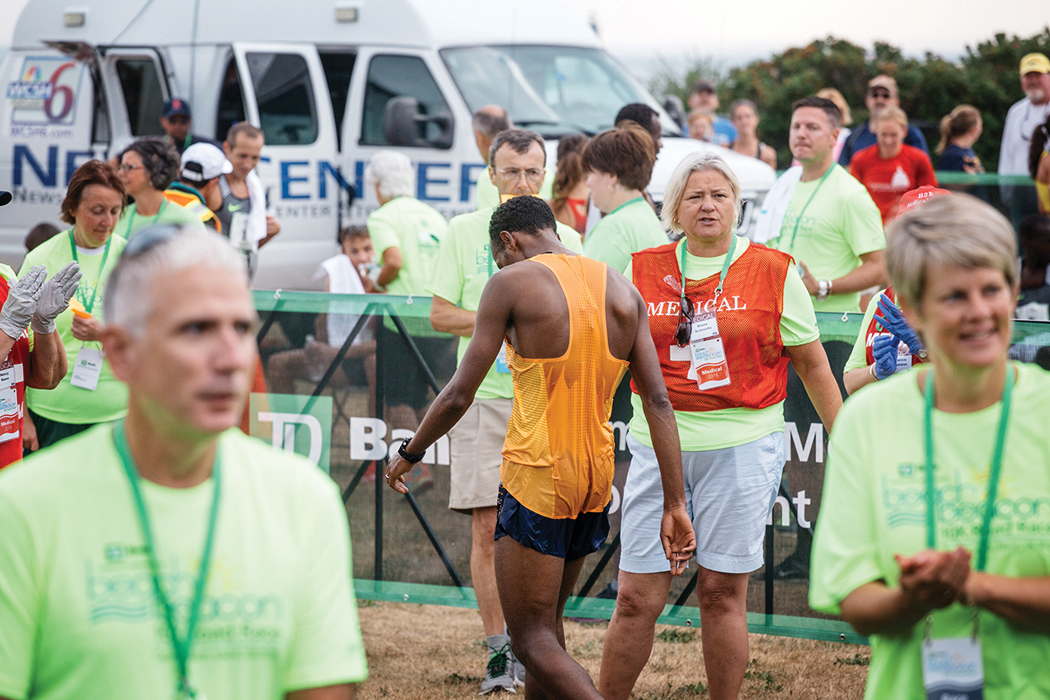 Tariku walks through the crowd after finishing 14th overall. Markos finished 13th. Both runners said high humidity kept them from performing their best. Should he run again another year, Tariku said, he would opt to come a few days earlier, to better acclimate to the weather.

Wude took second place in the women’s division. Mary Keitany, of Kenya, won the race and broke the women’s course record, finishing in 30:59.

Ben True, originally from North Yarmouth and now of Hanover, New Hampshire, talks with the press after winning the men’s division, becoming the first American to win the race. True narrowly missed qualifying of the 2016 Summer Olympics. 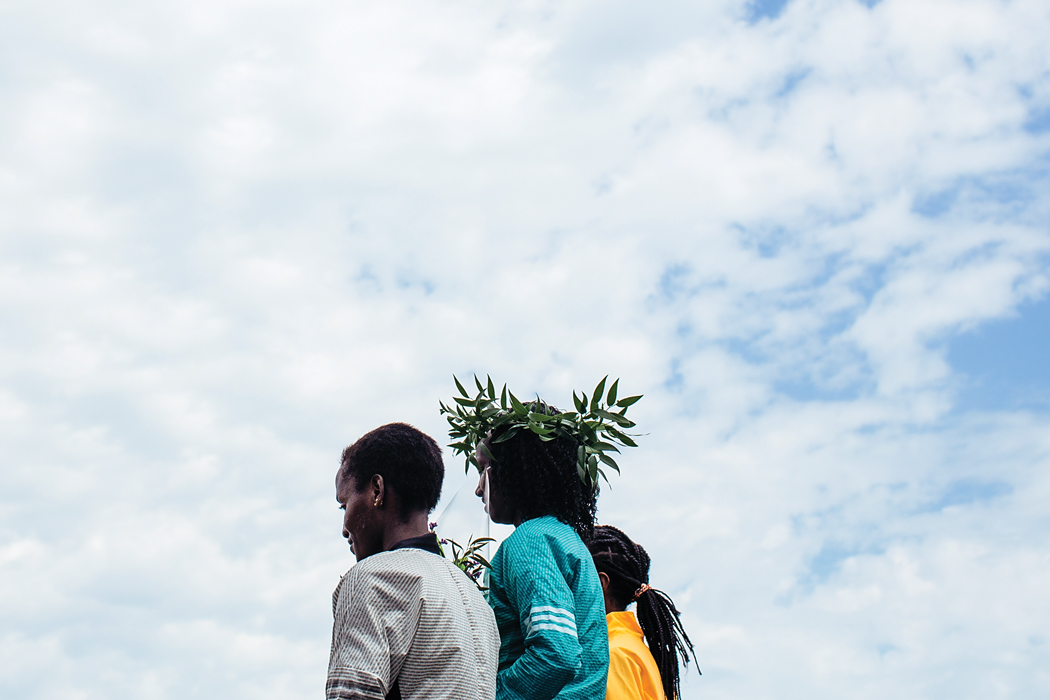 Wude (right) stands on the podium to receive a wreath with the other winners of the women’s division, first place Mary Keitany (center) and third place Caroline Chepkoech-Kipki (left), both of Kenya. 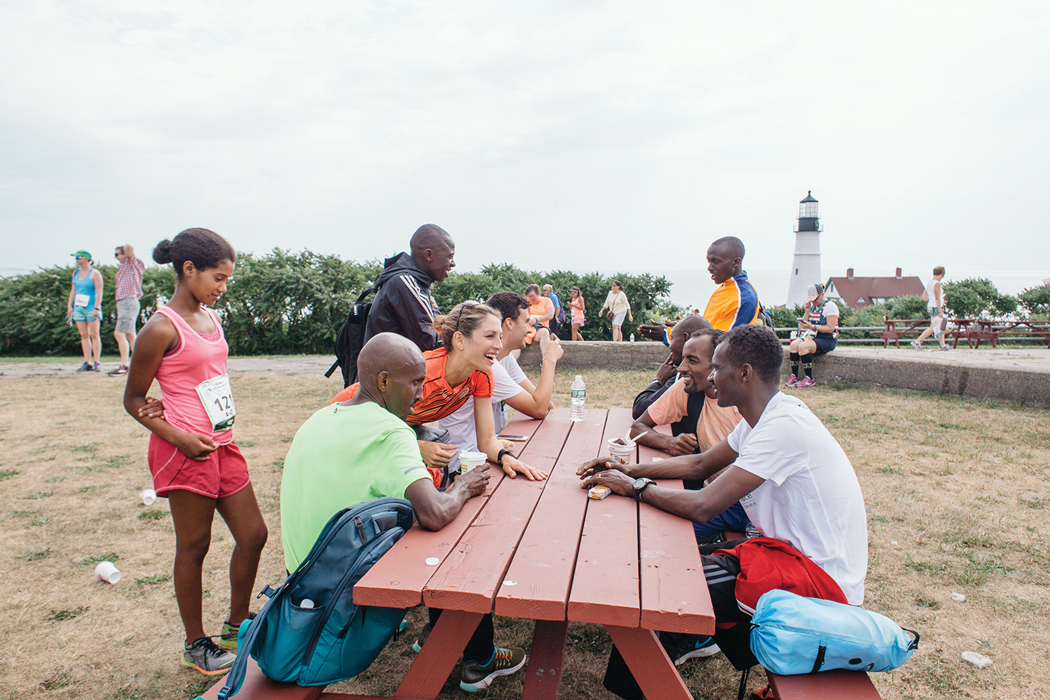 Abdihakim Abdirahman, second from left and four-time Olympian, and Sara Hall, center, former Pan American games champion, chat with Tariku and Markos after the race. With many of the Beach to Beacon elite runners traveling and competing on the professional race circuit, they often compare notes and trade stories from other race venues. “You don’t have to be in good shape to run Boston,” Abdirahman said of the Boston Marathon. “But to run London you have to be good shape.”

To celebrate the race weekend, Markos and his Ethiopian colleagues joined other elite racers, sponsors, local host families, and other members of the community — several hundred in all — at an oceanfront VIP lobster bake and afterparty in Cape Elizabeth. Ironically, very few Ethiopians eat shellfish, which is forbidden in Orthodox Christianity.

After the race, Markos and Tariku took naps, then asked Mark to take them shopping. Tariku had a list of supplies his wife in Ethiopia had requested: diapers, beauty supplies, rice, and more. Mark suggested they shop at Target. Tariku mentioned that he’s considering a shift from middle-distance races to marathons, which tend to offer bigger purses. “Running is business,” he said. 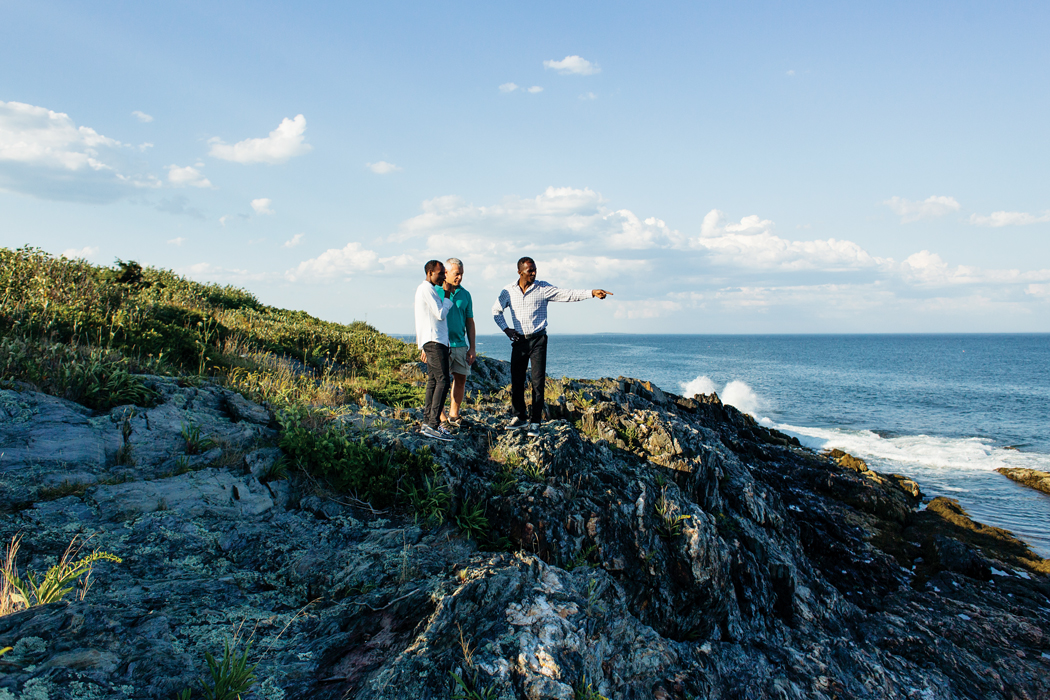 On their last evening in Maine, Mark took Markos and Tariku to an ocean overlook near his childhood home — a place special to his family. “It’s so romantic,” Tariku said.

Since these photos were taken last year, Mark Cook has been diagnosed with an incurable Stage 4 cancer. He has sold his Cape Elizabeth home, donated the appliances to a Syrian refugee family, and moved to South Portland. Recently, he reflected on his experience hosting Markos and Tariku. “I’m really grateful that I participated in an event that welcomes and supports people who are different,” he said. “Inclusion, tolerance, supporting others — these are values that have always been there for me. It’s what I believe in, and my values have become sharper with the end of my life being clear.”

Editor’s note, summer 2018: Mark Cook lost his battle with cancer in May of 2018. His obituary may be read here.