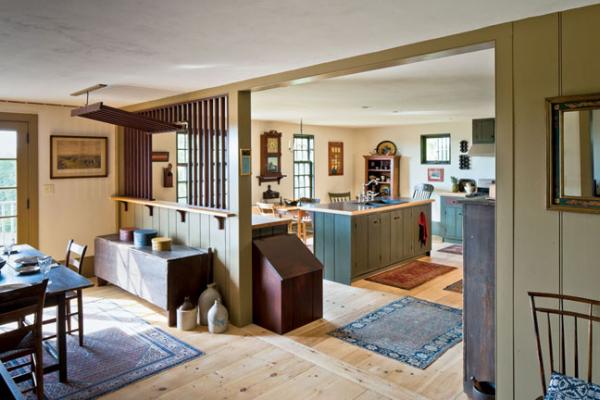 The 1780 barn red Cape that the Angiers disassembled board-by-board and reassembled on a new site in Alna graced the cover of Down East in February 1990. Twenty-two years later, their new hip-roofed colonial astride Morey Hill in Hope looks as though it might have been there almost as long as the Revolutionary War-era graveyard next door. Everything new looks old.

The classic colonial lines of the Angier house were inspired by old homes in Newburyport, Massachusetts. The red cedar clapboards and pine trim boards are secured with bronze, silicon-coated boat nails so they won’t rust and stain. Though the Angiers only moved in on June 15, 2011, their new home is already turning silvery gray on its way to antique black. The simple colonial box was designed by the Angiers themselves to contain the rich variety of painted surfaces on the interior.

Fred and Hope Angier (rhymes with danger) love old. They are decorative painters who have spent thirty years creating faux finishes, theorem paintings, fireboards, stair-riser murals, chinoiserie, and trompe l’oeil murals, all of which find expression in their new house in Hope.

“Our home is truly a showcase for our work,” says Hope Angier.

Hope and Fred Angier moved to Maine in 1980 and started their business in 1982. Hope generated all of the folk imagery and Fred did the designing, mixing custom colors and applying antique washes and faux wood-grain finishes. After two decades of work that established them as successful and sought-after decorative artists, the Angiers rewarded themselves for their hard work by setting sail for the Caribbean in a forty-three-foot ketch.

When the Angiers returned five years later they found the world had changed. Early American decor had gone out of vogue, in part, they believe, because the magazines and trade shows that had promoted traditional design had become the victims of new technologies and the post-9/11 recession. When the economy crashed again in 2008, the Angiers were busy disposing of Fred’s family’s home on Cape Cod. The house in Hope would be their way of re-introducing themselves to Maine and the design world, they decided.

“When we came back from sailing,” says Fred, “we needed to re-invigorate our business. We decided we wanted to design something ourselves that would integrate our love of the past into a state-of-the-art modern house.”

The Angiers found the wooded site in Hope in 2003. Over the next three years, Blake Edward Pulp & Log, of Union, cut one hundred cords of wood off the site, creating a six-acre clearcut that they hired their neighbor, Alan Adolfson, to grade and seed into a lovely meadow.

To build their new home, the Angiers knew they did not want a building contractor because they wouldn’t be in total charge of the project, so they hired Rockport artist-boatbuilder Stephen Florimbi. Hope had met Florimbi one day when, out for a walk, she stopped to inquire about the elegant proportions and roof pitch of his studio.

“From the start,” says Stephen Florimbi, “it was clear that they had their own vision. My challenge was to flush out what it was they really wanted.”

“Hope and I are pretty fussy,” allows Fred, “but we didn’t have a hiccup in this house. He made it perfect.”

“Their home is well-insulated and built from modern materials that are rugged and engineered for modern codes,” says Florimbi, who built the house between August 2010 and April 2011. “But at the same time, they’ve finished it so it has a very handcrafted feel.”

The Angiers chose the hip-roof colonial form with a widow’s walk in order to get the height they desired. They call it “an upside-down house” in that the bedrooms and bathrooms are on the ground floor while the living room, dining area, and kitchen are on the second floor to take advantage of the pastoral view.

The Angiers’ westerly view from Morey Hill looks out across the six-acre meadow and over the treetops to Buzzell Hill, Jones Hill, Philbrick Mountain, and Appleton Ridge beyond. When the leaves drop in the fall, they can see Alford Lake. The property is surrounded by a horse farm and bridle paths, the Angiers’ own meadow, and the woods are groomed with walking paths for their dog Kizuri, the fifth Rhodesian Ridgeback with whom they have shared their lives.

The entry hall of the Angiers’ house announces its simple, handmade aesthetic. The walls are beaded boards milled by Robbins Lumber, of Searsmont, and painted a deep blue-gray. The floors are pine boards secured with rose-head clinch nails.

The stairway leading up to the living spaces are painted with compass roses, the walls with a waxed wash that makes new wood glow with applied age, and the stairwell itself features a mural map of Penobscot Bay.

Throughout the house there are ship-painting fireboards, wall murals depicting invented coastal and country scenes in Hope’s personal folk motif, and Fred’s hand-painted checkered floors and faux grain painting. The focal point of the dining room is a Currier & Ives-inspired theorem painting of fruit and flowers created with overlays of stencils. A trompe l’oeil painting of a window opens up a tight pantry space, and a narrow downstairs hallway expands through the magic of a trompe l’oeil set of french doors opening to an imaginary landscape.

Builder Stephen Florimbi used an open truss joist system in order to allow for flexible wall placement such that, while the house is filled with antiques and traditional folk artistry, the second floor has a very contemporary look and feel. To accommodate the flow of spaces in the open plan of the second floor, the Angiers specified a wooden flip-up grate, between the dining room and the kitchen, such as those used in colonial taverns, and used half doors wherever possible.

Fred Angier says their business is all about “color, detail, design,” a mantra that plays out in subtle ways, such as the wide ox-blood red mopboard along the bottom of walls and the stencils used in place of crown molding along the top of walls.

The Angiers’ bedroom is painted out in a floor-to-ceiling stencil design of pineapples, willow trees, and oak leaves traced from a Moses Eaton stencil design found in an old tavern on the Sheepscot.

The furniture, except for a flat-screen television and a couple of comfortable modern armchairs, runs to the rectilinear rectitude of antique wooden tables, cupboards, chests, and grain boxes. There are also vintage rocking chairs and a collection of tin trays and wall clocks with reverse glass painting done by Elizabeth Chase Angier.

For all the applied art, antiques, and art objects, the Angiers’ house remains remarkably uncluttered, full but functional. While meant as a showcase for their decorative work, it is also their home. “We don’t do cute,” notes Fred.

“Fred and I are nesters,” says Hope. “Even on the boat we had oriental rugs and paintings. Living on a boat taught us simplicity and sufficiency.”

In their new home, Fred and Hope Angier bring the simple charms of the past to bear on the everyday realities of the present.