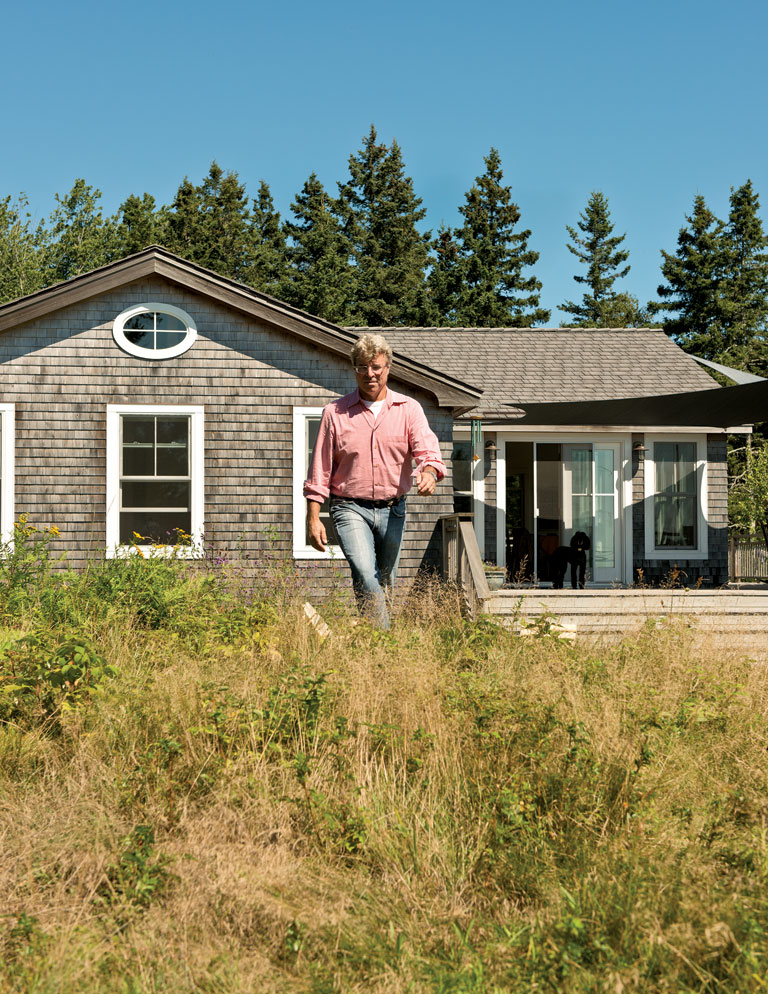 Sitting in a black Ford F-250 pickup with turquoise New Mexico plates, Steve Thomas looks out over fogged-in Casco Bay. He could be baking in an antique adobe cottage he renovated in Santa Fe, but he has just sold that home and is looking for a new one in Maine.

Why trade the comfortable Southwest for the hardships of a Maine climate? In Steve Thomas’s case, it’s because he enjoys Maine’s wildly unpredictable weather, its cozy sense of community, and its authentic sense of place.

“Maine sneaks up on you,” Thomas says. “I love Maine. Life is real in Maine. It’s more real than other places.”

And besides, he already has a summer home here, and Habitat for Humanity International, the housing organization for which he is the spokesman, would prefer that Thomas live on the East Coast.

A lot of Mainers know the name “Steve Thomas” and even more probably recognize his face from fourteen years as host of This Old House, one of the most popular PBS television series ever. Thomas, who won an Emmy in 1997-98 as “Outstanding Service Show Host,” took over for original host Bob Vila in 1989 and escorted audiences all over America fixing up old homes until 2003. From 2008 to 2010, he then hosted Renovation Nation, a Discovery Channel program devoted to sustainability.

Given his reputation as America’s “ultimate home enthusiast” and the fact that he had featured Habitat for Humanity projects on This Old House as far back as 1990, it was no surprise when Habitat for Humanity International asked Thomas in the fall of 2011 to become its spokesman and ambassador.

“If I have the opportunity to make a difference, it’s in housing,” says Thomas. “In Habitat, you know you’re making a difference because at the end of the day a wall is standing there.”

Born in 1952 in Pomona, California, and raised there and in Spokane, Washington, Steve Thomas came by his interest and expertise in home construction and renovation as something of a birthright. His grandfather, an Episcopal missionary in the Arctic, was a do-it-yourself guy out of Alaskan necessity. His father, who managed an industrial lighting plant by day, was a “weekend warrior,” spending all of his spare time buying and fixing up old houses as his family expanded to six children. “That’s what you did when you were a Thomas,” he says.

So that’s what Steve Thomas did after graduating from Evergreen State College with a degree in philosophy: He bought, fixed up, and flipped houses in Washington before taking off to see the world. His youthful wanderings then took him to Antibes, France, where he worked as a boat carpenter, across the Atlantic and through the Panama Canal to Hawaii and California in a forty-three-foot wooden sloop, and to Micronesia, where he researched and wrote a book about the ancient art of starpath navigation entitled The Last Navigator.

Based on his own studies with Mau Piailug, one of the last masters of the technique, Thomas filmed The Last Navigator as a PBS documentary, which is how he came to host This Old House.   The shows shared the same publicist and it was she who suggested that Thomas, with his background in construction and documentary film production, audition to replace departing host Bob Vila.  More than four hundred people tried out, but Thomas, then living in Salem, Massachusetts, with his wife, Evy Blum, got the job.

This Old House was one of the first reality shows, its long run of success attributable, Thomas believes, to the appeal it held to a generation of first homebuyers starting in the 1970s. “It was inspiring, informative, and entertaining about a subject people were interested in,” he says.

Noting that many people simply go to the Internet when looking for how-to building information, Thomas says, “It’s difficult to have an impact on television now.”

Though Steve Thomas left This Old House a decade ago, PBS vice president for human resources Carole Dickert-Scherr, who has visited the Thomases in Maine many times, says, “We still think of Steve as a member of the PBS family, and we’re thrilled he’s at Habitat for Humanity. And we anticipate spending many more days with the Thomases in Maine.”

Thomas had Maine connections long before he decided to live in Maine year-round. Evy Blum attended Camp Trebor, near Fryeburg, as a girl. Their son Sam attended Camp Kieve in Nobleboro. When they were living in Massachusetts, the Thomases owned a place at Sunday River and they rented cottages on Monhegan for several years.

Then in 1998, a friend told Thomas about a house for sale on Hupper Island, a 250-acre private island just off Port Clyde. He ended up purchasing and renovating not one but two Hupper Island cottages; his own home was the subject of 2007 Renovation Nation episodes, the other he sold to John Roberts, chief justice of the U.S. Supreme Court.

In 2007, Thomas renovated the cottage and built a new barn, placing a premium on sustainability. Since then, Thomas and Blum have spent May through October on Hupper Island. This past winter they house-sat on Falmouth Foreside while looking for a year-round home in Maine.

Foster Aborn, a retired John Hancock executive who now lives in Port Clyde, is one of Thomas’s best friends and biggest fans. “Steve, being a master carpenter and builder, is super handy and always willing to help on any project,” says Aborn. “He’s our go-to person for any advice needed in the realm of mechanics, electricity, or landscaping. He is a good friend, and Port Clyde is much the better for him being an island dweller.”

Tom Judge, director of LifeFlight of Maine medical helicopter service, and artist Susan Groce of the University of Maine art faculty are also Port Clyde residents who have gotten to know Thomas and Blum well. Judge says that while Thomas’s primary interest is ostensibly houses, what he’s really interested in are people.

“As we have spent time together over the years comparing notes, gardens, recipes, and music, we are continually learning that Steve’s journey through building boats and houses is ever more about home, community, and how we all fit within the landscape,” Judge says. “Steve’s new work with Habitat is the natural evolution of leveraging creativity to a human end, this new home.”

Thomas’s work for Habitat is wide ranging, from traveling to Kenya to help complete Habitat for Humanity’s 500,000th home to participating in Habitat on the Hill, the organization’s annual lobbying blitz of Congress. In Washington, D.C., Thomas accompanied Habitat CEO Jonathan Reckford in lobbying congressional representatives and their staffs on behalf of funding for Self-Help Homeownership Opportunity Program (SHOP), a Housing and Urban Development program that provides financial assistance to improve neighborhoods, and funding for VISTA and AmeriCorps.

“We are so pleased to have Steve involved more deeply with Habitat,” says Reckford. “His background and passion for our mission have been a tremendous help in raising awareness about affordable housing.”

Thomas also works with Habitat’s corporate partners to raise awareness of how businesses support Habitat’s mission of providing decent, affordable housing worldwide, and he works to promote ReStore, Habitat’s building materials recycling project, the Cars for Homes donation program, and Women Build. Recently he has been working on a Habitat branding campaign.

“It uses videos to tell stories,” says Thomas. “I’ve done that for years. Now I can do it for something I deeply believe in.”

And Steve Thomas has also come to be a big believer in Maine. “Maine still has a sense of place that is long gone from the rest of the United States,” he says. “There’s a sense of community, that we’re all in this together. I also value the tolerance, that fierce brand of Maine independence. Mainers don’t care what kind of car you drive, what you do for a living, or how much money you make. They can tell if you respect them in twelve nano-seconds. That kind of egalitarianism is pretty unusual.”

Edgar Allen Beem is a freelance writer from Yarmouth who has been contributing to Down East since 1983.