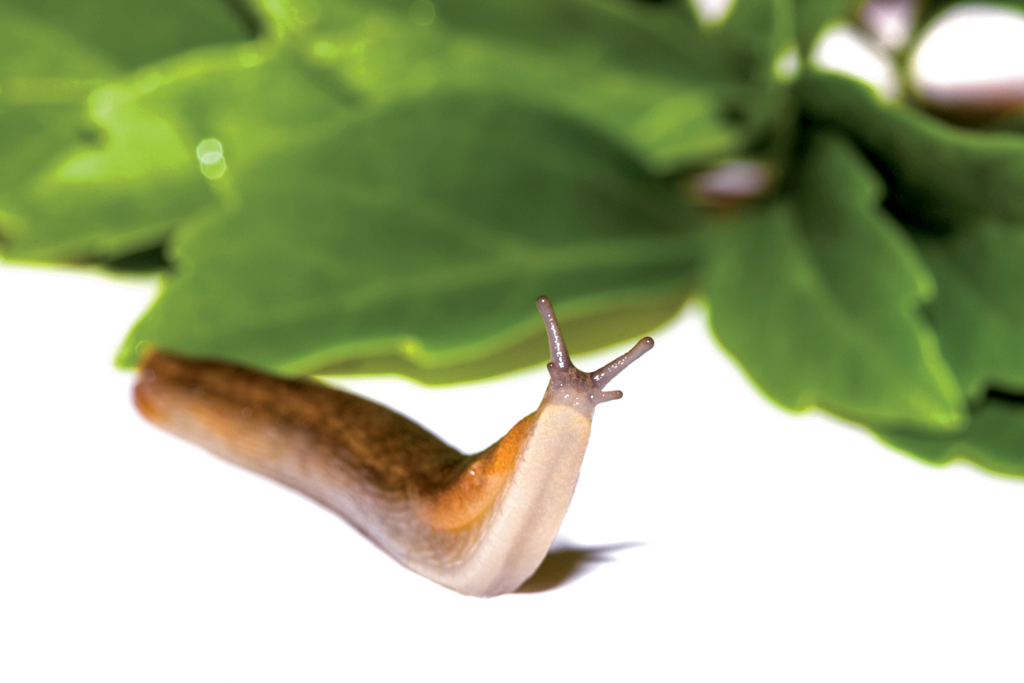 [C]onsider the lowly slug. When I was a child of about five or six, I apparently did. My grandmother was busy with a sharp garden tool killing slugs that were rampaging through her strawberry patch. “But Nanny,” I implored, “slugs have to live too!” I came around a little bit when she showed me all the strawberries that I wouldn’t have the chance to eat because the slugs had beaten me to it. But for the rest of her life, she would always remind me of that story if I were engaged in a barbaric activity of any kind. And it comes to mind now as I methodically move through my flowerbeds, plucking slugs off the tender plants. I still can’t kill the things, even though I confess to sometimes freaking out a little if I’ve got one stuck to me. When my parents grew a vegetable garden, my dad would set out bowls of beer to lure and drown the unsuspecting slugs. For some reason drowning a slug in beer — my father always assured me that they died happy — wasn’t so horrifying as chopping it up with a trowel.

A local writer I know has recently written a beautiful book called The Sound of a Wild Snail Eating. When she promotes the book, she plays a recording of the actual sound of a snail eating. You can hear it crunching on a carrot; snails have hundreds to thousands of teeth in those soft little mouths! I’ve gotten down on my hands and knees to find out if I can hear that shell-less snail, the slug, chewing on my daylily leaves, but so far no luck — just a closer view than I’d like of that silvery trail of slimy slug mucus.

In college, my friends from the West Coast assured me that our little New England slugs were nothing. On “the other coast,” they informed me with a certain tone of reverence in their voices, they have the banana slug. Later, when I attended graduate school in Oregon, I encountered first hand the world’s second largest slug species and was duly impressed. (The first words out of my mouth upon seeing my first one on the trail were wildly exclamatory and unprintable.) Slugs out West are indeed giants, and an encounter with one can be rather dramatic. The resemblance to a banana is not insignificant — you do not want to step on one of those huge yellow creatures. The University of California at Santa Cruz has adopted the banana slug as its mascot, Sammy, which says as much about the quirky sense of humor of its students as it does about the undeniable magnificence of this gastropod.

I’ve gotten down on my hands and knees to find out if I can hear that shell-less snail, the slug, chewing on my daylily leaves, but so far no luck — just a closer view than I’d like of that silvery trail of slimy slug mucus.

As with any creature, even a small, slimy garden pest, the closer you look, the more interesting it becomes. For example, the sex life of a slug is wacky. Slugs are hermaphrodites, meaning each one possesses both male and female sex organs. This simplifies the slug dating scene — all a slug has to do to mate is find another slug. This also explains why there are so many of them. (Our reliably moist climate doesn’t hurt, either.) But here’s where it gets weird: mating slugs apparently practice something called apophallation. I quote Wikipedia: “In apophallating species, the penis curls like a corkscrew and during mating often becomes entangled in the mate’s genitalia. Apophallation allows the slugs to separate themselves by one or both of the slugs chewing off the other’s penis. Once its penis has been removed, the slug is still able to mate using only the female parts of its reproductive system.” Lucky slug.

As you’d expect with a soft-bodied, abundant little creature, the slug gets eaten by a lot of things (besides its mate). I remember from a favorite childhood picture book that the hedgehog favors slugs as food. I’ve also come across a wood turtle with its mouth full of slug. I’ve been told that even salamanders will eat slugs. Don’t try this at home, however, as I’ve read that a slug may, rarely, transmit a form of parasite-borne meningitis if eaten by humans.

Slugs themselves, as most of us have witnessed, eat plants. They seem to really like my dahlias and daylilies in particular, and they wreak havoc rather indiscriminately in the vegetable garden. And, of course, they love strawberries. Almost every gardener I know complains about them. Master Gardener Fred Davis admonishes on his Web site: “First, and probably most important, never — ever — let a slug get away! You must be ruthless in your search for and destruction of these fat, slimy, and hungry creatures.” For non-toxic removal of slugs, he urges the simple technique of picking them off your plants and drowning them in a jar of salt water. (Slugs can’t swim, and the salt draws the moisture from their bodies.) He scoffs at the bowl-of-beer method, recommending a series of buried jars of yeast in water as a more effective alternative. Apparently slugs love yeast (hence the attraction to beer). Raising the pH of the soil will help keep slugs away, too, according to Davis. You might feel a bit like you’re casting a spell, but sprinkling a circle around your garden of ashes or lime, both of which are alkaline, will ward off slugs like magic.

In the woods I often notice mushrooms that have been chewed at by slugs, including the colorful Amanita mushroom, which contains a highly toxic hallucinogen. I can’t help wondering if the slug is affected by this, enjoying its trip, or if something in its mucus blocks the chemical effects. I’ve never found bodies of slugs lying around the base of one, but then again, I’m sure something as edible as a slug doesn’t lie around for long once dead. Another question to ponder: If a slug eats a hallucinogenic mushroom, is the creature that eats it affected by the toxins? Again, you probably don’t want to try this at home.