8 Rules for a Great Maine Garden

From a quarter-century of working the Maine soil spring eight Maine gardening tips.

Originally published in our April 2014 issue.

When I moved to Maine in 1988, after an early life largely misspent below the Mason-Dixon line, I knew everything I needed to know about gardening. It was just a matter of time before my midcoast backyard became a glorious dreamscape of color and texture and scent.

Today, slouching toward my 26th [now 30th] Maine summer, I’m amazed at how much I’ve unlearned. My figmentary Eden has been winter wracked, plague ravaged, and moose stomped. Its feeble remnants were seen off by slugs in the Year of Our Lord 2008, when we enjoyed a long wet spring followed immediately by autumn.

But count yourself lucky, dear reader. Having undergone the gardening equivalent of the threefold death, I come before you with lessons to impart. There are not many of them, and you’d be right to doubt my bona fides, sage-wise. But hear me out.

Maine is an island, for gardening purposes.

Don’t let Google Earth bamboozle you. Though we appear to be proximately situated to places like Connecticut (where you can order anything in the catalog, poke it in the ground, and voilà!) as well as places like Ontario (where the word “rose” turns to ice and shatters before reaching your listener’s ear), Maine is neither one thing nor the other. Our climate cuts both ways. Don’t ask me to explain it. Just park your expectations at the Kittery bridge.

“Grow what everyone else grows” doesn’t always work.

Everywhere around me, people grow phlox and forsythia and lilacs. It often seems you can’t help growing them — turn your back on a bit of ground and these Maine stalwarts will creep in and take over. Well, let me tell you: forsythia and lilacs do not grow for me. The only clump of phlox I’ve managed to sustain is pressed hard against the septic tank. One obvious explanation suggests itself, but there may be another: this clump came from an old garden, so overgrown that the roots were intertangled with sensitive fern, the daylily Hyperion, and some kind of large rudbeckia. They’re all still there, spreading but still locked together. Symbiotic magic? We’ll come back to this.

“Grow what no one else grows” probably won’t work either, but . . .

Being smarter than I am, you’re mindful of climate zones; you scrutinize nursery tags for cautionary indications. You’d never follow my bad example by trying to grow, say, bald cypress, or English boxwood, or Nandina domestica, or yellow-groove bamboo, just because you fondly recall them from your childhood in temperate climes.

But what’s this? I’ve got all four chugging along nicely, conventional wisdom be damned. The Nandina does need careful positioning. The cypress, which in Louisiana would be 20 feet tall, is progressing by millimeters. I tried a few types of boxwood before finding Rochester, whose leaves stay dark green through winter and whose supple branches bend, rather than snap, under the heaviest snow. As for bamboo, dear Lord, I’m up to 10 species now; some year soon the Japanese garden police will cite me for failing to install a tea house. So apart from an elevated risk of heartbreak, there’s no harm in trying.

Winter is no time for dreaming. Instead,  make babies.

The only way to win gardening territory in Maine is through blunt infantry tactics: boots on the ground. Try one plant at a time, on one patch of soil. Shrug off your losses, build on your gains. If a sortie fails here, it may yet succeed over there. But you can’t learn this on the sofa in January.

Winter is a good time, though, for indoor propagation. (The vegetable kind, I’m talking about.) Making plants from plants is rewarding and usually easier than you expect. There’s something especially nice about a windowsill hedged by young greenery, with snow beyond.

Natives are not easier than exotics, but still worthwhile.

Many of us feel an impulse to grow wild native species. There are great Maine gardens, like those made by Beatrix Farrand around Bar Harbor, where whole areas are filled with things like blueberry or sweet fern or mosses. It’s an admirable idea. But don’t go into it assuming that natives will be easier, tougher, or more resistant to natural horrors than immigrants. There’s a reason “exotics” like the rugosa rose and the western lupine have crowded out their local cousins. My own approach, increasingly, has been to reward and encourage natives where they appear, but not to try ordering them about.

The wrong time of year does not exist.

The gardening year follows a canonical calendar: transplant in spring or fall, prune between fall and late winter, divide when the plant is dormant, and so forth. I say bosh to that. Do garden-related chores when the mood is upon you. (The exception is pruning, which I do in earliest spring when the plants are naked of foliage but you can see which buds are starting to swell.) With few exceptions, thriving plants can be broken up or schlepped about and will carry on with little fuss, while ailing plants should be moved to gentler spots immediately, before they shuffle off this mortal coil. Wait for the appointed time and you’ll likely be napping, distracted, or stacking firewood.

Winter is not the tricky part of the Maine garden year. It has its own beauty, which can be enhanced by structural elements like tree trunks, hedges, benches, statuary, even last summer’s seed stalks poking up through the snow. The problem comes in the adjacent seasons, those months that are neither green nor white. A good practice is to keep your eyes open when you’re out and about, taking note of plants that catch your eye. Certain trees, for instance, have appealing colored or peeling bark. Tall grasses like miscanthus retain mass and presence even when they’re bent and tanned. Evergreens that are boring in July can be hugely consoling in November. But by all means, grow moss — or rather, nurture it where it appears, as you would any other perennial. It glows bright green when all else is drab and brown.

One of the most intriguing discoveries of recent years is the extent to which plants are dependent on one another and on the unseen community of fungi and bacteria in the soil. Some botanists even suggest that the basic unit of a living community is not the plant but the mycorrhiza, a symbiotic fungus-and-root relationship.

This could explain a lot about some strange goings-on in my Maine garden — why one plant prospers while a seemingly identical specimen withers close by, or why a sullen plant will languish for years, barely hanging on, then mysteriously begin to thrive, like a teenager emerging from the doldrums of early adolescence. You can buy mycorrhizal fungi at Maine garden centers now. I recommend it.

And thus we learn.

It is possible to start right off gardening in Maine with close to zero useful knowledge about anything, and emerge only a few decades later in possession of enough facts to take up all your fingers, thumbs excluded. I think that’s reason to celebrate. 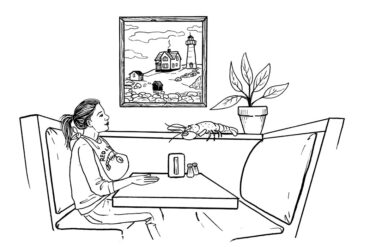