A Century of Skylands 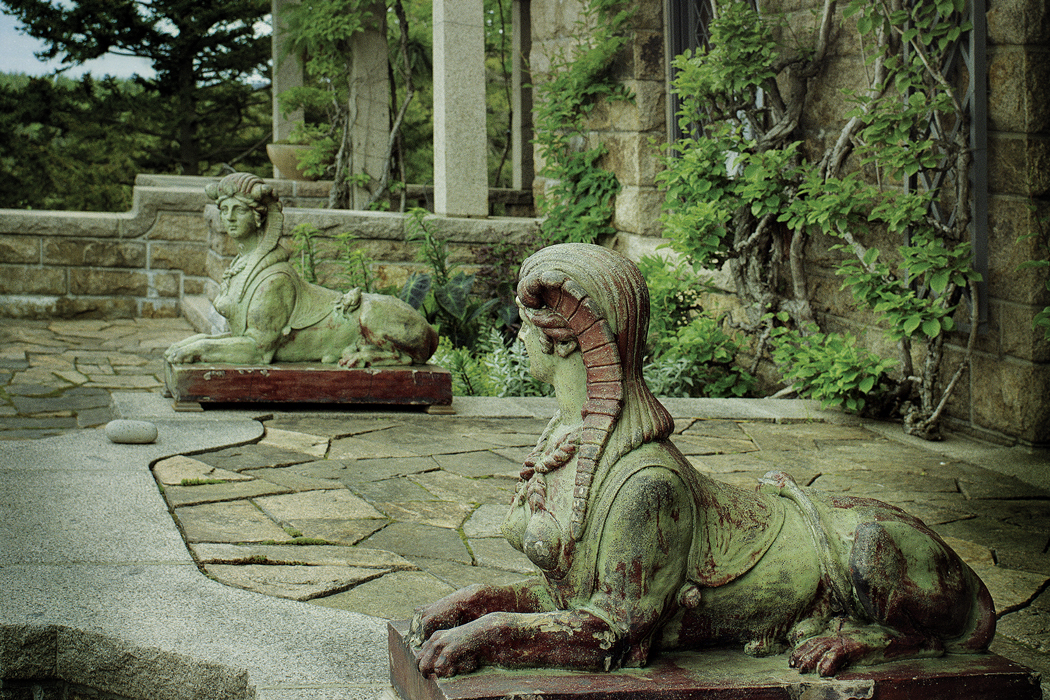 In 1922, John D. Rockefeller Jr. revealed himself to be something of a busybody. “My dear Mr. Ford,” the financier and philanthropist wrote to his neighbor Edsel, shortly after visiting the 80-acre hilltop property the Ford Motor Company president had purchased near Rockefeller’s place in Seal Harbor. Rockefeller described himself as “wondering whether, if I owned the property, I should want to build a house on the very top, with a view in every direction . . . or whether I should prefer the less extensive and yet marvelously beautiful view which one gets on the western side of the hill.” He was “leaning toward” the latter, Rockefeller not-so-subtly advised his neighbor.

“My dear Mr. Rockefeller,” Ford wrote back, politely. “We shall not build on top of the hill, but rather down approximately 100 feet from the top . . . at a location which will place the front of the house somewhat west of south.” Together with New York architect Duncan Candler, Ford and his wife, Eleanor, had carefully considered both the siting and style of their 12-bedroom vacation home, known as Skylands. “The purpose was not to make a prepossessing place . . . belittling its neighbors in its grandeur,” wrote journalist Karl Schriftgiesser in 1926. “The purpose was to blend the house with the hill, to make the two as much the part of each other as it is possible to combine a man-made affair with nature.” Much to Mr. Rockefeller’s relief, one imagines.

Low-lying and hip-roofed, its mass spread across staggered rectangular volumes erected from pink granite excavated on site, the house, now owned by Martha Stewart, looks as though it’s been chiseled out of the surrounding ledge. Conscious of being a newcomer on the hill, Ford reportedly requested moss-covered rocks for Skylands’ exterior “so as to offer a settled appearance,” says Lydia Vandenbergh, co-author, with state historian Earle Shettleworth Jr., of Revisiting Seal Harbor and Acadia National Park. A heavy enclosure of maples and pines, along with shrouds of kiwi vines on the walls and naturalistic landscaping on the grounds — the work of renowned Chicago landscape architect Jens Jensen — further feather the building in.

“In a sense, Skylands is the culmination of Candler’s work in Seal Harbor,” says Shettleworth, noting the way the home combines elements of the architect’s earlier shingle-style cottages — natural materials, a broad terrace, sympathetic siting — with “hints of early modernism,” seen in the simplicity of the exterior. In fact, of the 15 homes Candler designed in the area, the only outlier was Rockefeller’s Eyrie, which the architect enlarged in its existing half-timbered style. “Uncle Duncan hated that style, but he had to go along with it,” says Candler’s great-niece, Seal Harbor resident Anne Funderburk. Rockefeller’s wife, Abby Aldrich Rockefeller, apparently shared Candler’s distaste for Eyrie, declaring to Funderburk’s grandmother, “I’d like to push this house off the hill!” Her wish was more or less granted in 1963, when the estate was torn down.

As the owner of Candler’s masterwork — and, as of 2015, an adjacent Candler-designed home and formal garden conceived by Jensen that were originally part of the Ford property — Stewart views herself as “the caretaker of an American treasure.” Skylands’ bones — including its leaded-glass windows, granite-paved entrance hall, beamed great hall, oak-paneled library and flower room, and kitchen and bathrooms faced with pale-gray Pewabic tiles — remain as they were when the Fords stayed here with their four children. Stewart purchased Skylands fully furnished from its second owners in 1997 and has combined a curated selection of the Fords’ furniture, china, silver, glassware, and linens with myriad pieces of her own. Whiteware stacked on open shelves defines a kitchen wall. Historical maps of MDI surmount the game room’s pink-cypress wainscoting, and, in the living room, faux-bois concrete tables and planters mingle with Victorian papier-mâché chairs, antique button-tufted seating, and Ford’s telescope, its lens trained on the westerly sweep of woods and water that Skylands’ owners have long prized.