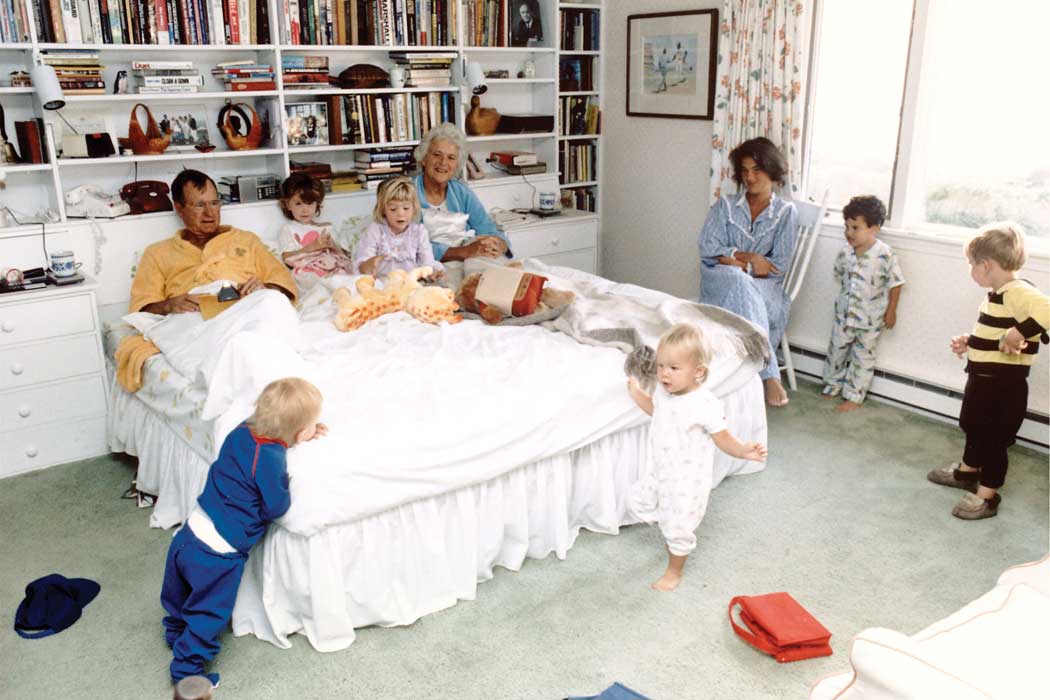 A son’s memories of his Mainer parents shed light on our state’s fond relationship with the former First Lady, who died in April at age 92.

[dropcap letter=”A”] large, framed print of this photo hung in my parents’ home in Sanford for many years. I still have it, and when I read that Barbara Bush had died, I thought of it immediately.

My folks weren’t particularly politically active. They were both veterans of World War II and Korea. My dad was a Republican and a Marine Corps medic; my mom was a Democrat and an Army lieutenant. They’re buried together in Arlington.

My dad was born and raised in Sanford, and even though he spent his career as a college professor in Indiana, he was a Mainer through and through. I grew up spending summers hanging around Perkins Cove and having Sunday dinners at a family farm in East Waterboro. As soon as my parents retired, they moved back to Maine, into the house my dad had grown up in.

They kept two lawn chairs in the back of their car, and every evening when the weather was decent, they’d get some chowder at Alisson’s in Kennebunkport, maybe a lobster roll or some fried clams, then they’d go down to Walker’s Point and put their lawn chairs in that space on the rocks between the Episcopal church and the entrance to the jetty, and they’d sit there and watch the sunset. That was their evening routine.

They had a fondness for Walker’s Point, and they had a fondness for the Bushes. They were the same generation. My mom and Barbara had somehow ended up on a couple of commuter flights together, and my dad had met George H.W. Bush at some kind of fundraisers. So they admired them, and like a lot of people in the state, they knew them as Mainers and as neighbors. Walker’s Point had been there long before Bush was president, and my folks had to drive by it a couple times a day to go to church in Cape Porpoise, where they were super active. Of course, they thought of H.W. as someone who was the president, but I think they identified more with George and Barbara as generational peers and as folks who lived in Kennebunkport. First, the Bushes were Mainers. Then, secondly, he was president — you know, so you’ve got that going for you.

I worked at Reuters in DC when Bush was in office, and my friend Dave Valdez, who took this photo, was the chief official White House photographer. I used to keep a box on my desk, and whenever I’d spot a good Bush family picture, I’d throw an extra print in there. When I drove up to Maine, I’d bring the box and give it to my folks, and they’d look through all the photos. When my parents saw this image, of the Bushes waking up at Walker’s Point, they just loved it. They had it framed and put it in my dad’s office; it hung over his desk, an American flag on the left, a Marine Corps flag on the right.

In the photo, George’s hair is tousled. He has his coffee cup there, just a grandpa on a Sunday morning, that look on his face like, “Well, I guess we’re up now.” The twins are up in the bed with all their dollies lined up. The kids have clearly rifled through grandma’s purse. It’s Sunday, it’s summer in Maine. Sunlight is pouring in.

Many of the tributes from Mainers that followed Barbara’s death had to do with people’s personal encounters with her — seeing her eating dinner in Dock Square, which the Bushes did often, or walking her dogs on the beach. And simply feeling a kinship. Everybody liked Barbara.

There’s a quote of hers that’s been floating around, from a commencement speech at Wellesley College. “At the end of your life,” she said, “you will never regret not having passed one more test, winning one more verdict, or not closing one more deal. You will regret time not spent with a husband, a child, a friend, or a parent.”

This picture epitomizes that quote. You’ll notice the back wall is all books, which was her cause, of course — literacy and reading. This picture is Barbara Bush: her home, her coffee mugs, her books, her family.