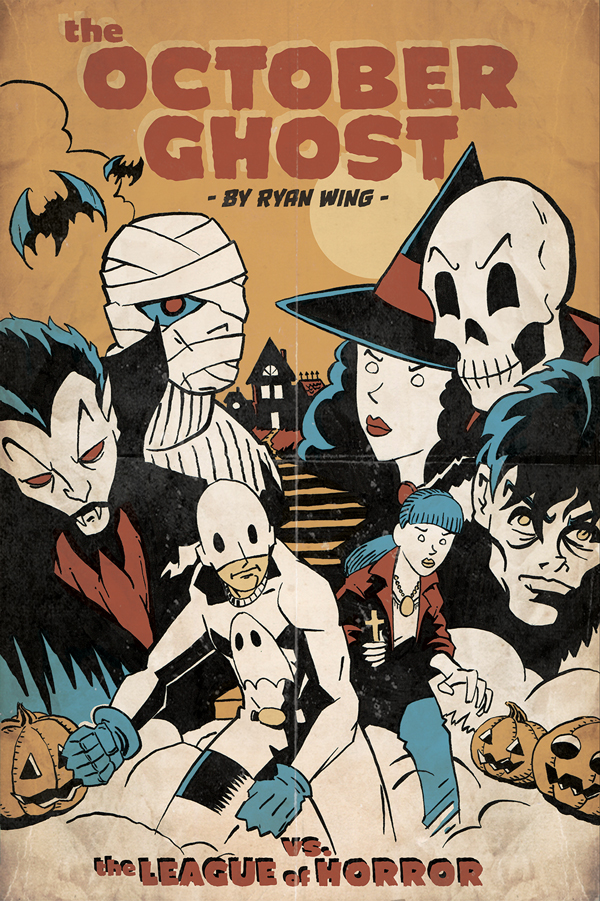 Growing up in South Paris, in the foothills of western Maine, Ryan Wing grabbed as many old comic books as he could at local flea markets. X-Men and The Tomb of Dracula were early favorites. Later, series with unusual styles and storytelling techniques, like Sandman and Doom Patrol, piqued his interest. Even after Wing, now 40, got a fine arts degree at the University of Southern Maine and took a job in IT, superhero geekdom and a creative impulse commingled in the back of his mind.

“What do I love?” he recalls asking himself seven years ago, pondering a superhero of his own. “October. Halloween. It’s awesome. What sounds good with that? Ghost. Perfect.” Thus the origin of the October Ghost. Wing got to sketching: tight white suit, roguish mask, chiseled jawline, ripped pectorals. He wanted to pay visual homage to 1930s pulp characters like the Shadow while giving storylines the wacky unpredictability of 1960s titles like The Flash. Wing’s dauntless vigilante doesn’t have a corresponding real-life identity — there’s no Clark Kent to his Superman, and readers never glimpse the man behind the mask. All they know is that the October Ghost is dead set on combatting evildoers in the fictional seaside town of Stormwell, Maine.

After years of shorter installments, the October Ghost gets book-length treatment this fall in The October Ghost vs. the League of Horror. Despite the narrative freedom of extra pages, Wing sticks to simple grids on each page, standard for Sunday funnies but anachronistic among modern comic books, with their angular, incongruent frames. He likes the challenge of the classic layout. “It creates great constraints,” he says. “How can I tell this story within that structure?”

The October Ghost pays visual homage to 1930s pulp characters like the Shadow while giving storylines the wacky unpredictability of 1960s titles.

Another challenge: portraying Stormwell in a way that’s true to a Maine smalltown vibe while also creating grabby imagery. Wing constantly reminds himself to put the contents of each frame in proper proportion. “I have to keep scaling down,” he says. “Okay, they’re on a pier, literally just a pier, not a giant wharf. Or they’re going to get on a boat. It’s not a huge boat — it’s going to be a small boat they use to escape.”

In the book, robots commit waterfront heists, fear-inducing toxin throws residents into a frenzy, and the titular clan of villains — performers who turn their stage roles into sinister alter egos — attempts an occult ritual to conjur actual monsters.

Also, Wing introduces Jane Farmer, a private investigator caught up in the fight against the League of Horror. As he worked, Wing realized that Farmer was on a more compelling character arc than the October Ghost, whose crime-fighting drives the plot, but whose mysterious persona remains static. “The October Ghost shouldn’t really change,” Wing says. “That’s not the kind of character he is. I don’t even have a backstory for him.” So, instead, Farmer evolves into the star of the story.

Who knows what future plots lurk in the heart of the October Ghost’s creator? Wing already has ideas for other October Ghost adventures — and for additions to his roster of masked Mainers, because it’s a big state for just one superhero.

Ryan Wing’s The October Ghost vs. the League of Horror is available this month for $14.99 at unexpectedpress.com and in comic book shops around New England.

Farewell to a Lewiston Pawnshop