A good Italian restaurant is long overdue in Portland’s Back Cove. That’s obvious as I drive up and down side streets, searching for a parking spot on a Thursday night, a task that wouldn’t have been the least bit difficult before Tipo opened on Ocean Avenue in January.

Everything just fell into place for Chris and Paige Gould, owners of the popular Central Provisions in the Old Port, who purchased the former Borealis Bread building about a year ago. “The location was right, and the building itself had great bones — the inclusion of the brick oven alone was enough to sell me on it,” Chris says.

Much like its Mediterranean cuisine, Tipo’s décor is simple and clean, with wood and chrome accents, conjuring a light, airy Roman Holiday atmosphere that’s very different from its sister restaurant across town. “Where Central Provisions sought to preserve the historical aspect of the building, Tipo is the opposite,” Gould says. “We’re really keeping things streamlined here.”

That sets the course for a food-focused experience that emphasizes the ingredients. Take the hand-pulled mozzarella plate, for example: the cheese is the star. A specialty that Smith perfected while cooking in Napa Valley, the mozzarella is bright, creamy, and very moreish, and it’s accompanied by four briny varieties of olives, in tapenade and powdered forms, as well as sweet golden raisins.

To make his charred octopus, Gould confits the seafood in olive oil, then grills the tentacles before seasoning them with a rich, piquant chermoula sauce. The rest of the body is cut into chiffonade, and the long, thin strips are laid atop fresh greens and fregola sarda (a semolina pasta similar to pearl couscous). A bottle of Bruno Giacosa Arneis from Piedmont, a white wine with rich texture and pleasant minerality, is a nice complement. 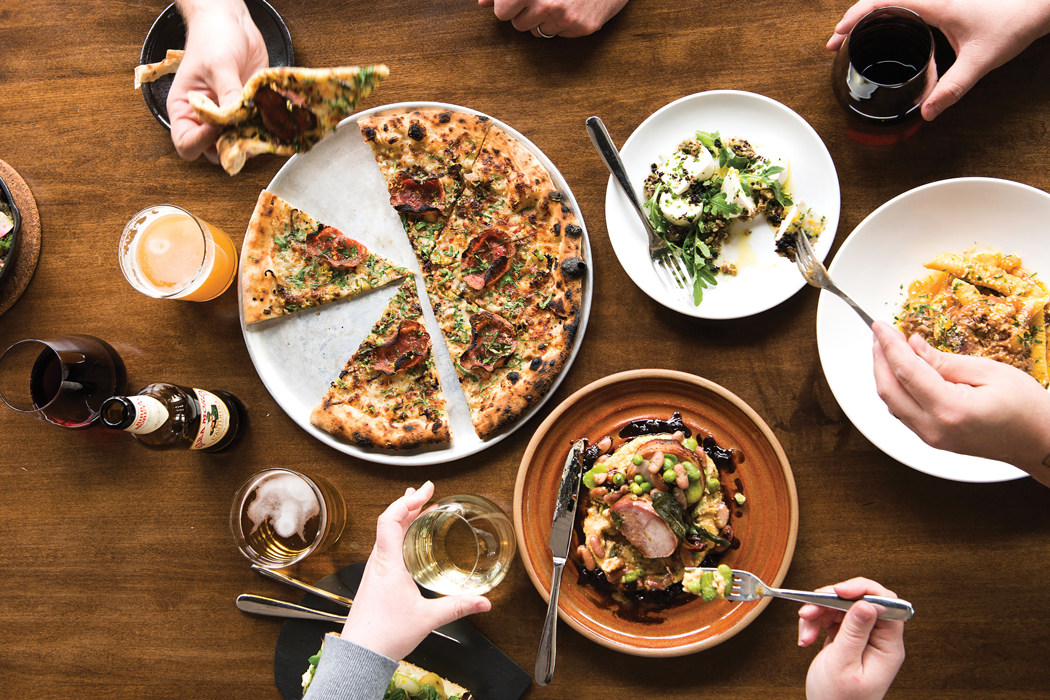 Tipo’s practice of breaking down whole animals is evident in each night’s menu. Rabbit from North Star Sheep Farm in Windham may make an appearance as both a starter, such as rabbit confit on toast, and a more substantial plate, such as rabbit saltimbocca. The latter is a labor-intensive and astoundingly delicious preparation that involves de-boning the rabbit and wrapping it into a meltingly tender ballotine with thin layers of sage and pancetta. It’s served over creamy garbanzo bean puree and drizzled with a decadent, silky sauce of fig, rabbit stock, and vincotto.

While many of the dishes listed on the menu sound like red-sauce-joint staples, their flavors are far more complex and intriguing than that. Gould’s meatballs, for instance, are a blend of pork and beef seasoned with North African spices and served in a harissa-spiked tomato sauce. They come with a creamy, cooling dollop of ricotta blended with lemon zest and chives. His version of cacio e pepe is a fresh black-pepper tagliatelle tossed with a rich brodo and a mountain of umami-laden Parmigiano-Reggiano.

Gould describes his pizza as a hybrid of Neapolitan pies and American dining habits. “I’ve always loved Neapolitan-style pizza, and I personally enjoy how, in Naples, it’s served whole and not sliced,” he explains. He wasn’t sure how well that would go over with diners here though. So he serves his pies pre-sliced, topped with simple, fresh ingredients, the thin crust charred and crispy on the outside and fluffy and chewy on the inside. The New Haven–inspired white clam pizza with spicy soppressata, washed down with dry, fizzy Lambrusco from Emilia-Romagna, is the perfect weeknight reward after a long day at work.

And then there are the warm, ethereal zeppole — essentially doughnuts served with a creamy blend of whipped ricotta and egg and laced with a slightly spicy long-pepper sugar. “My need to offer these go back to my days at Coppa, when I always wanted to put zeppole on the menu, but Ken and Jamie weren’t into it,” Gould jokes. “I guess I have literally been harboring resentment about that for 10 solid years, and I finally got my chance to make it right.” The zeppole couple nicely with Tipo’s frothy Il Maglione cocktail, made with Cardamaro, vodka, Strega, and egg white.

Tipo’s food and accessible wine list are enough to earn the restaurant accolades, and the attentive, friendly service is making regulars out of one-off visitors. I can’t think of a better way to spend a summer evening than sitting on Tipo’s patio, sipping rosé, and enjoying a beautiful plate of marinated sardines.

Your Next Night Out is in a Barn

The Maine Ice Cream Trail Has the Scoop on Scoops