All Food is Street Food Now 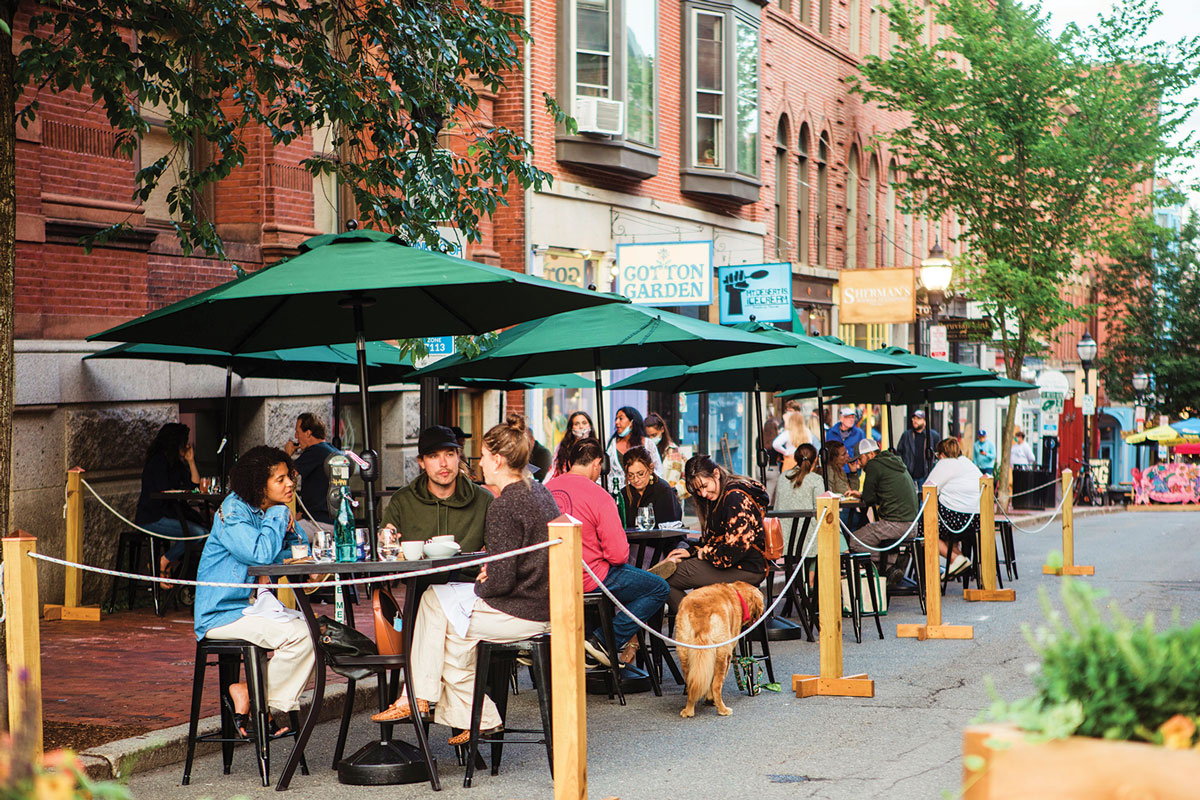 In early March, I didn’t grasp the seriousness of the coronavirus pandemic or the impact it would have on the many restaurants I love. I suspect I wasn’t alone in misjudging the situation. Many in the food world devised new takeout and delivery programs — I particularly enjoyed a heap of fried chicken from Honey Paw, the Asian-fusion bar on Portland’s Middle Street — but none of my acquaintances in the biz imagined that dining rooms would remain closed into May, let alone the heart of the summer.

The takeout-only format was never going to be enough — few restaurants could hit the volume needed to make ends meet over the long run. Some closed temporarily, others forever. The ones that stayed open couldn’t support servers, bussers, hosts, and dishwashers. Once it was obvious that neither the pandemic nor the resulting restrictions would lift anytime soon, restaurateurs around the country started promoting an idea: shut streets to cars and open them to outdoor dining. In Portland, city officials saw the merits and started blocking off restaurant-dense sections of the Old Port.

Clockwise: The street-side setup and egg-topped Gruyère-and-mushroom sourdough toast at Eaux; drinks, plus chicken scarpariello with broccolini, at Via Vecchia

I spent a recent Sunday hanging around those newly pedestrianized streets, curious about how things were going. There had been some cause for concern: a few weeks earlier, Ilma Lopez, chef/owner of the West End’s Chaval, posted a photo on Instagram of mask-less hordes milling around narrow, cobbled Wharf Street. And as I walked toward Middle Street, the concrete blockades redirecting traffic somewhat gave the impression of a war zone.

The morning, though, was warm and sunny, and it felt good to be out in the city again. I’d booked a street-side table at Eaux, on upper Exchange. Pushing back in my seat before my food arrived, I was suddenly aware of the architecture around me. Had I ever stopped to look up at the 1866 Portland Savings & Loan building before? Its graceful stone arches and redbrick walls define one end of the street, the domed clock tower of city hall the other. A trickle of people moseyed by, safely distant from the tables, while I tucked into a bowl of gumbo with a side of fresh beignets. The waitstaff was masked and cheery, and I was cheery too after a couple of frozen coconut daiquiris.

In the evening, I strolled down to Wharf Street. Pandemic or no, it’s always a busy part of town, and the number of people around grew noticeably as the sun dropped lower. Still, the scene looked nothing like the zombie-apocalypse horror of the moment Lopez had posted about. I sat down at a table outside the just-opened Via Vecchia, at the intersection of Dana and Wharf. Another customer, not wearing a mask, mistakenly thought I’d arrived after her and been seated before her, and she loudly confronted a server. In the heat of the moment, I might have loosed a few choice words, but an instant camaraderie formed among staff and diners, and relieved sighs and laughter spilled out as the offended party walked away. My server commented that the pandemic had indeed brought out the worst in some people. She brought me fresh bucatini tossed with clams, mussels, lemon, and cured fish roe, then crispy chicken alongside broccolini and spicy Peppadews.

After dinner, I strolled a couple of blocks uphill, past bustling, provisional alfresco setups. It was wonderful to see — the city felt transformed, dare I say, for the better. On the lookout for dessert, I wondered if there was any chance city officials would let these street closures continue once the pandemic ends, then I snagged a table outside Gross Confection Bar. The day had been hot and humid, and I was charmed to be offered ice in my water — a weirdly rare thing nowadays, I realized. Additional hydration arrived in the form of a glass of Sauternes, French sweet wine, just right with a slice of goat-cheese cheesecake with rhubarb compote and a white-chocolate–and–lime crumble. I hadn’t expected to feel at ease in this environment, but I did. For however long the pandemic lasts, I thought, I hope my fellow Mainers realize the tenuousness of these arrangements and treat dining out as the privilege that it is. Then, with a belly full of cheesecake, I sat and soaked up the familiar restaurant sounds — clattering silverware, convivial chatter, bursts of laughter — all bouncing off the facades of surrounding buildings.