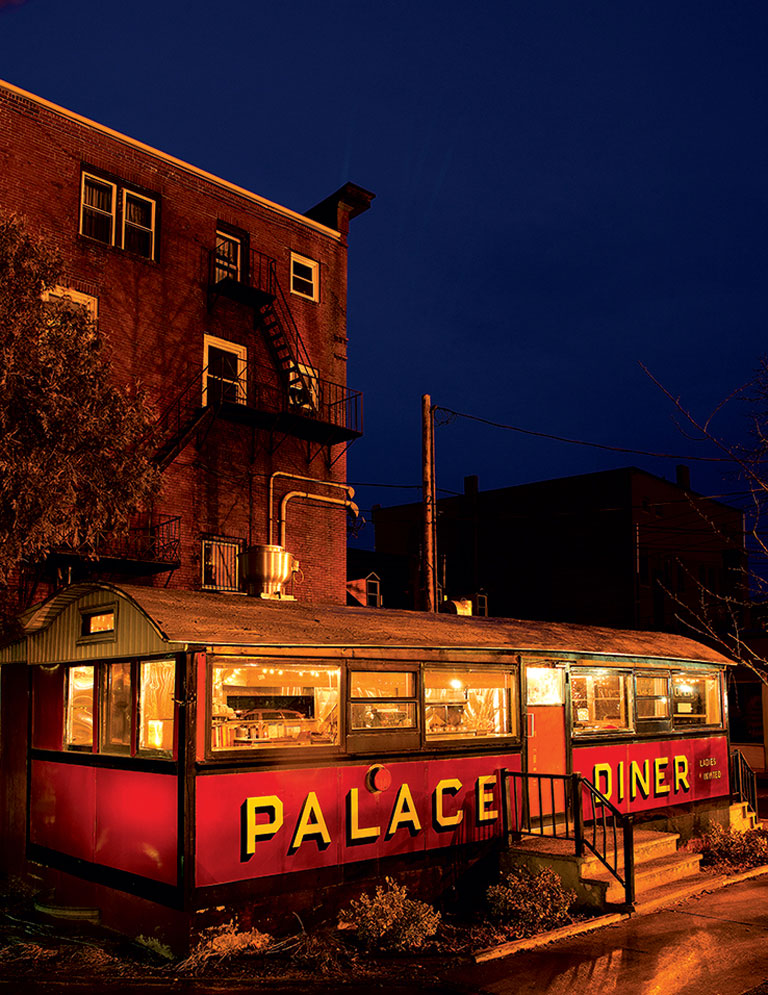 The Palace Diner in Biddeford is red and low-slung, nestled against a neighboring brick building. The diner, which opened in 1927 and is believed to be Maine’s oldest dining car, is bookended by a one-way street and a narrow, brick-lined city park named for Israel Shevenell, a Franco man who walked from Canada to Biddeford in 1845 to work in the town’s burgeoning textile mills.

A hand-lettered sign on the Palace’s façade reads “Ladies Invited” in a blocky yellow font. Inside, the white and black and mint-green tiles gleam; behind the counter, the stainless steel sparkles. The counter itself, however, is well-worn. At each of the diner’s 15 black vinyl stools — there are no booths or tables — grooves are worn in the counter by the elbows of decades of diners.

The Palace’s original owner, Louis Lachance, was a locomotive engineer for the Boston & Maine Railroad before he jumped the tracks for an amazing restaurateur run from 1927 to 1962.

Today, the Palace’s new operators, Chad Conley and Greg Mitchell, are just the sixth owners to cinch up their aprons and helm the griddle. Their confident interpretations of classic diner fare reveal both a respect for tradition and an innate understanding that simplicity demands quality.

Both Conley and Mitchell (just 28 and 29 years old, respectively) have arrived with serious culinary chops: Conley cooked at Hugo’s in Portland and helped launch Gather in Yarmouth, while Mitchell cooked at the Gramercy Tavern, a New York City institution. The pair met while working as farmers at Eliot Coleman’s revered Four Season Farm in Harborside, and it feels only appropriate that a vintage diner would attract two young chefs who understand high-quality ingredients at a seed-to-table level.

When Conley and Mitchell discovered the Palace Diner was available back around January, they dropped a fully formed business plan that was months in the making and committed to a new course. “This wasn’t a total turn from the kind of restaurant we had in mind, but it gave us structure,” says Mitchell. “We certainly didn’t have to justify a dining ‘concept’ here.” Landing in the turnkey Palace also allowed the pair to focus on what interested them the most: a tight breakfast and lunch menu of elevated but unpretentious diner fare.

Diner food leaves nowhere for a chef to hide. There are no rare and expensive ingredients or unnecessarily dramatic plating techniques to woo the customer. There are just the basics, common ingredients we all know: eggs, potatoes, meat. So why is the Palace’s execution of food anyone can make so exceptional? Simply put: the details. The food at the Palace Diner is both honest and deliberate. It’s not by accident that the tuna melt is served on perfectly cushiony challah bread, or that the corned beef hash (made from grass-fed Maine beef brined and braised in-house) is recommended with the complementary flavor of marble rye toast, or that the homemade banana bread is griddled with brown butter so its sweetness is perfectly balanced by a hint of salt. Even the diagonal cut of the zesty house-made pickles is just right.

It’s too often forgotten that a well-executed “simple” menu actually requires greater consideration and understanding of food fundamentals. Take the peerless Palace Potatoes, for example: red-skinned potatoes boiled, seasoned, then smashed and seared on the griddle to create a home fry that is soft and creamy on the inside, crisp and crunchy on the outside. Or the diner’s deluxe breakfast sandwich, which is far from your greasy standard. For starters, the egg is baked like a frittata rather than fried, stacked with applewood-smoked bacon, melted cheddar, and sautéed jalapeños, then served on a sandwich-size English muffin.

Conley and Mitchell know they  have the opportunity to explode the expectations of a customer visiting a rough-around-the-edges diner car in a Maine mill town, and they do so with nearly every item on the menu: the diner’s P.B.L.T. improves the traditional B.L.T. by using in-house slow-roasted pork belly in place of bacon; the coleslaw is mayo-less with a vinegary pop and generous dose of dill; the traditional ice box cake is layers of crumbled cookies and fresh whipped cream, but thoughtfully served in an individual jelly jar.

“A lot of places will have, say, 30 items on their menu, but a third of them are only so-so,” says Mitchell. “We’d rather have 10 items and nail every single one.”

The locals smile as they reminisce about the Palace when the textile mills were still running three shifts, churning day and night. Back then, the Palace was open 24 hours a day, seven days a week. They say when the diner’s 15 stools were full, men waited two deep behind them at the counter. They say as soon as a man stood up, another took his stool. They say those days, just like the mill jobs, are gone.

It is true you will no longer find shoulder-to-shoulder mill workers grabbing some chow on a short break. But today, Biddeford is writing the next chapter of its history and the counter at the Palace Diner is a democracy of faces: a retiree next to a young person chatting with a plumber who just handed the sports section to a city worker beside a banker while an attorney checks her watch and looks to the narrow kitchen window in hopes the little bell will ding and the next plate of eggs will be hers.