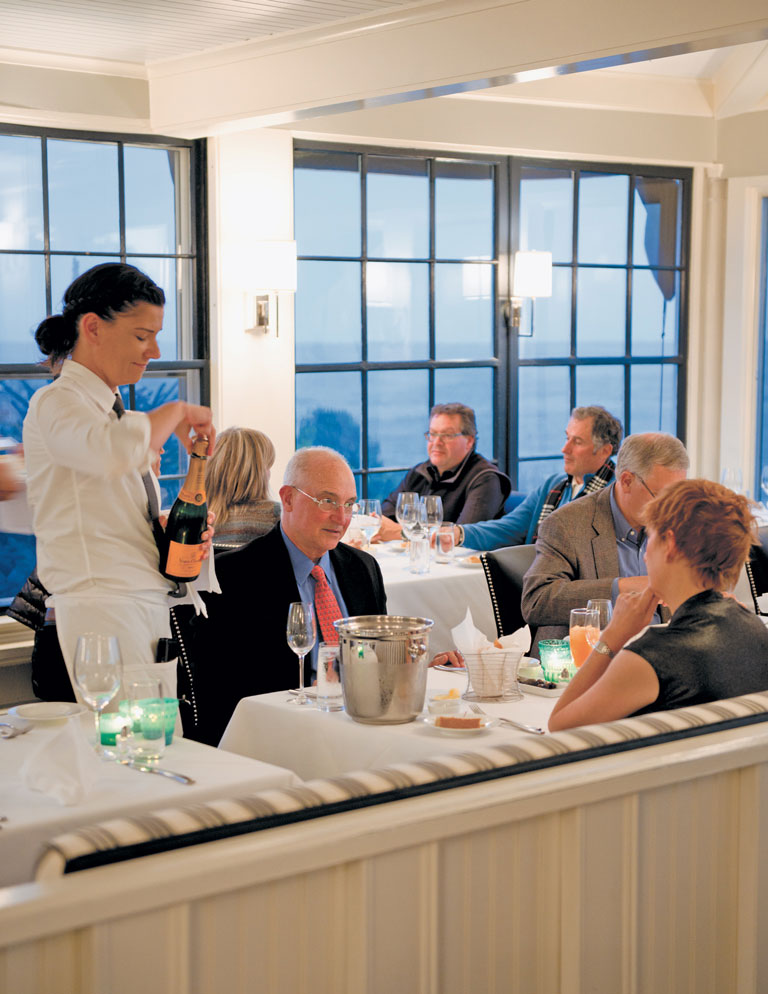 There are several ways to enjoy fine French food while overlooking the Atlantic. Book a luxury liner. Fly to France. Or weave your way past historic mansions and elegant inns along Kennebunkport’s Ocean Avenue to the recently opened Ocean restaurant at the Cape Arundel Inn.

It’s hard to choose the best reason to come. The stunning view overlooking the wave-washed ledges? Chef Pierre Gignac’s equally spectacular menu? Or that along one of Maine’s most exclusive stretches of real estate, this is the closest most of us will get to living here?

Happily, generous windows allow guests to appreciate the food, the view, and the fantasy within the dining room, which is illuminated at night by the soft glow of votive candles. Close your eyes to the other oh-so-delighted-to-be-here guests and you can even pretend that you own it.

After all, the turreted 1895 cottage-style inn was one of the first private summer residences on the point. Edged by a wraparound porch with wicker chairs just right for relaxing before dinner, the inn tops a grassy mound halfway between Dock Square and its famous Walker’s Point neighbors. The former President George Bush Sr. and his family summer a mere half-mile up the road and are frequent dinner guests along with their presidential son. Barbara even celebrated her 88th birthday here.

Ocean opened last May, but Gignac, who grew up in Montreal, is no stranger to the area or to French cooking. After graduating from the Insitut de Tourisme et d’Hôtellerie Québec and traveling the globe, he and his wife, Lisa Stratton, moved to Maine to help start Ogunquit’s 98 Provence, which they owned and operated with Gignac’s sister and brother-in-law. The acclaimed bistro served southern-French fare for 18 years before it closed in 2012 and Gignac was invited here.

Devoted fans followed Gignac up the coast to the intimate 55-seat restaurant, making it a success. Off-season Sunday brunches, specially themed dinners, and guest chefs fill the colder, quieter months when a weekend night may attract only a handful of diners. In summer, reservations are recommended at least a month in advance. Pull out a black, brass-tacked chair at a window-side table to fully take in the view, which stretches from Sandy Cove to Wells.

The first difficult choice, after peeling your eyes away from the waves, is whether to order from the tapas menu or the appetizer menu, marked “First.” The solution is to do both. Crusty chickpea fries, from the tapas list, take legumes to a whole new level. They’re sprinkled with sea salt and served with a small dish of smoky pimentón paprika mayonnaise. Chilled Maine oysters, mussels, and clams with leeks, mustard, and saffron cream, and cod mousse beignets with sweet chili sauce and fresh mint are similarly tempting.

Ocean’s seasonally changing menu features abundant seafood with a Mediterranean flare. The French influence accounts for typical appetizers of frog legs and snails. But the Cassoulet of Escargots, served in a mini cast-iron pan filled with creamy soft, green flageolet beans, kale, garlic sausage, and parsley butter, is anything but ordinary. A salad of roasted and pickled beets arrives in a checkered red-and-yellow tower topped with tangy watercress and buttery chèvre mousse drizzled with walnut oil.

“I love to take classical or traditional French recipes and deconstruct and modernize them,” says Gignac, who worked at French and Italian restaurants across Canada and traveled with his wife to Southeast Asia and Europe before moving here. “I want the food to feel satisfying to the soul.”

The only entrée ordered more than seafood is lamb. Savory walnut-crusted rib chops are perfectly paired with chestnut and potato gnocchi, roasted whole chestnuts, and braised butter lettuce in white wine. Rabbit is another recurrent option, as is lobster. Relying on local farms and docks whenever possible, Gignac strives to reinvent the familiar. Lobster bouillabaisse — a brothy blend of shrimp, clams, mussels, calamari, and half a split lobster tail served in the shell with fennel and smoked paprika aioli — is an example you won’t find at any lobster shack.

While dinner is served, tall-masted schooners and smaller craft glide across the horizon. Jazz plays in the background, seeming to sing the sun to sleep as long evening shadows drop over the water. One by one, the stars appear — and so does dessert.

Finally, before heading home, pause in the front lounge to peer through the brass telescope aimed at the southern night sky. Or stroll along the sidewalk squeezed between the avenue and the swirling ocean. Inhale the salty spray and early spring gardens where, for one extraordinary evening, all this is yours.