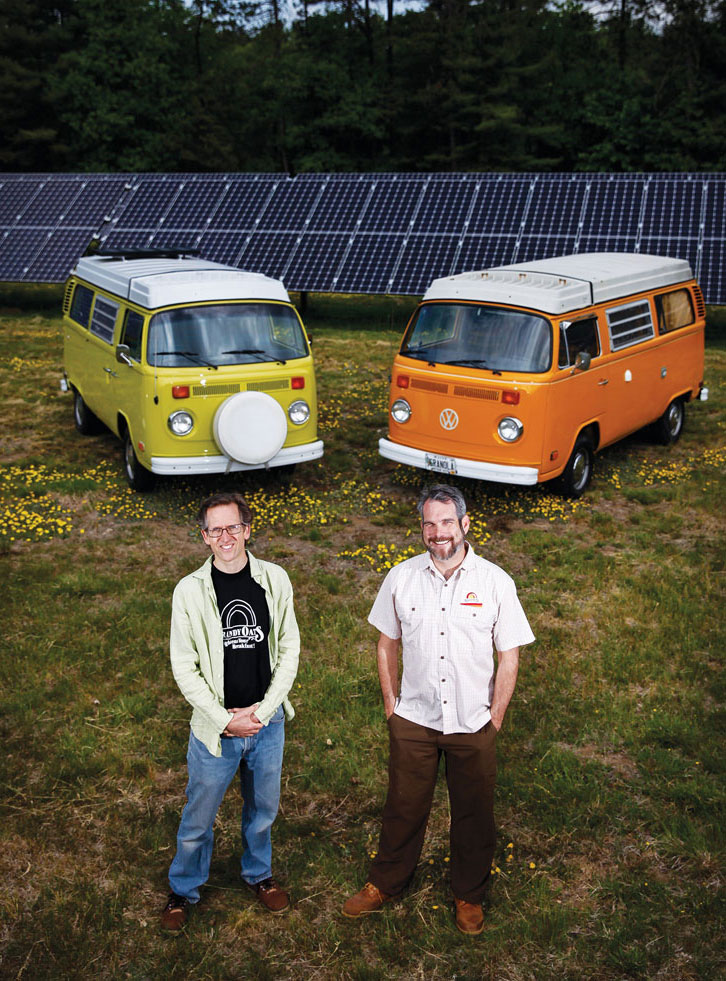 The free-spirited college buddies behind GrandyOats go big and go green with their wholesome snack.

Nat Peirce is the kind of guy who jams with an acoustic band in a woodstove-heated bus in the woods. Aaron Anker, meanwhile, is the kind of guy who dresses up as Santa Claus to paddleboard Casco Bay in December. Together, they’re the kind of guys who run GrandyOats, an organic, eco-friendly granola operation with a growing roster of gluten-free products and a vendor base expanding well beyond the Northeast.

Outside their 13,000-square-foot facility at an old elementary school in Hiram, the two unbuttoned kindred spirits are most eager to show off the field out back, where kids once played kickball. Now, 288 solar panels cover the lawn, visual confirmation that GrandyOats is, as far as Peirce or Anker knows, the first net-zero, entirely solar-powered food manufacturer in New England.

“I’ve googled it a gazillion times,” says Anker, the company’s self-anointed Chief Granola Officer. “I can’t find anybody else. Maybe we should say ‘in the country’?”

With their dedication to a) sustainability and b) not taking themselves too seriously, Peirce and Anker are basically the Ben and Jerry of toasted rolled oats.

College buddies at the University of New Hampshire in the ’90s (and proud owners of two well-traveled VW buses), Peirce and Anker joined up in 2000, after Peirce had already run the business by himself for several years. Since then, much has changed.

GrandyOats has gone from offering a handful of granolas to producing three-dozen products, including granola, muesli, nuts, and trail mix. Annual sales have rocketed from $115,000 to more than $5 million. Peirce and Anker started with zero employees and now have 21. And to accommodate all that growth, they recently moved out of a former dairy barn in Brownfield and into their current schoolhouse facility.

Every batch is still hand-stirred. “Machines couldn’t care less about their work,” reads the packaging.

Nonetheless, Peirce still signs every payroll check and hands them to each employee on Mondays. Every granola batch is still hand-stirred (“Machines couldn’t care less about their work,” reads some GrandyOats packaging). Two of the bakery’s 80-quart mixing bowls predate Peirce, first used by “Granola Queens” Penny Hood and Sarah Carpenter, the tie-dye hippies who founded the company in Farmington in 1979 (and thought up the name, a pun on “grandiose”).

In 1997, Peirce was running a vegetarian café over a bookstore in Bridgton. At the same time, Hood and Carpenter had been looking to sell, but only if they found a buyer they trusted to maintain their commitment to natural ingredients and an earth-friendly company ethos. Peirce, who wanted a change of pace, fit the bill.

He spent three years doing everything from above the bookstore in Bridgton, then from the walkout basement of a house he bought. On Mondays, he’d pay bills and call customers. On Tuesdays, he’d be up to his elbows in granola — mixing, baking, bagging. By Thursdays, if the orders lined up right, he’d load his pickup to save money on shipping and head up the coast to visit customers, a knit hat atop his head, brown hair spilling Rapunzel-like to his waist.

While Peirce was happily grinding out his small-time operation in Maine, granola was ejoying a national boom, which meant competitive threats from heavier hitters. In 2000, Kellogg’s acquired healthy-cereal-giant Kashi, which later swallowed up Bear Naked granola. “I worried that, as the industry continued to grow, I was going to get pushed off the shelf,” Peirce recalls. “I needed someone who had the ability to sell.”

That’s where Anker came in. Six years after graduation, the two college pals serendipitously bumped into each other at a jam-band concert. Anker had just moved to Portland after a stint as a ski bum in Aspen — a lifestyle he’d supported, as it happens, by waiting tables at a vegan restaurant above a bookstore. He too had moved into the business of health-food trends, working for primo juice maker Fresh Samantha, boning up on the finer points of sales, distribution, and marketing.

When Anker asked whether Pierce might consider repping GrandyOats, his friend countered, “Why don’t we just partner?” As a team, they brought complementary strengths. (Anker calls Peirce his “other wife.”) Most importantly, Anker had the tactical know-how to grow sales beyond New England and start to compete in the broader granola market. Now, GrandyOats products are everywhere from Hannaford in Bangor to Whole Foods in San Francisco.

“He’s the gas and I’m the brakes,” Peirce jokes.

They refer to themselves and their often-nicknamed employees (including sales rep “Antioxidant Rich” Raymond) as “granolas” — and the nod to hippy do-goodery isn’t just for show. The company buys more than 4,000 pounds of locally farmed oats a month and then sells them in 3-pound bags marketed as Maine-grown organic rolled oats. The local purchasing narrows their own profit margin but helps support farmers who plant soil-friendly grains in fields that have long produced only potatoes.

But while balancing good business and good citizenship, neither Peirce nor Anker has lost his sense of fun: A short walk from the brick walls and solar panels of their new headquarters, just down a wide path, the Saco River winds past tree-lined banks. In summer, the water abounds with kayakers, canoeists, and inner-tubers. It’s a great spot, Peirce and Anker think, to position a float bearing the GrandyOats logo — a big enough float, Peirce suggests, for his band to set up and turn this river bend into a happy, happening place. A grandiose idea, indeed.

See more Making It in Maine!