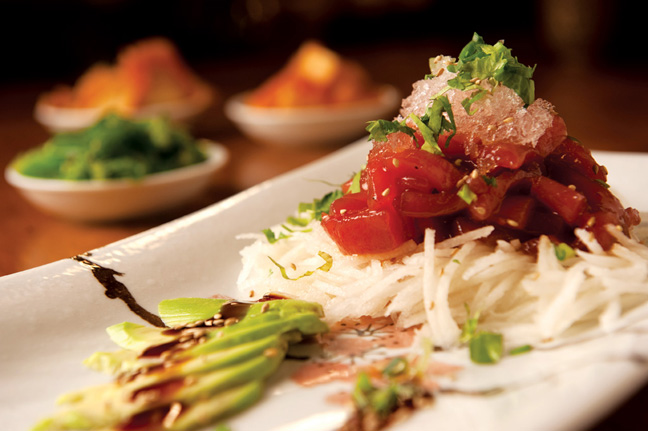 Authentic Korean food is faintly familiar and wonderfully foreign at this restaurant in Bethel.

When Pok Sun Lane was a girl in Korea, she did not like to eat. Curry, in particular, offended her palate. “It smelled like medicine,” says Pok, the proprietress of Cho Sun, a spectacular Korean restaurant on a bustling stretch of Main Street in Bethel. Her mother experimented until she found a formula that did not look, smell, or even taste exactly like traditional curry. “Not green, not red,” she explains, with a warm smile. “In between.” And thanks to a secret ingredient that shall not be disclosed here, at Cho Sun the expected pungency of curry gives way to a more delicate and equally alluring aroma. Which is to say that the curry, like everything on the Cho Sun menu, is at once faintly familiar and wonderfully foreign.

Scott Lane, Pok’s son and co-owner, is Cho Sun’s chef. With his more American sensibility, not to mention a degree in electrical engineering, he likes to weigh and measure and write things down. His mom is a more intuitive cook — you might even say spiritual — channeling her beloved mother’s memory through handed-down, unwritten recipes. “I go by taste,” she says. “Taste once: no, not yet. Taste again: not yet. Try again, and there she is, in the taste, in the smell of the food.” She laughs, her beautiful face lighting up. “It drives him crazy, my son the engineer.”

However unorthodox, the family formula works — every dish that comes out of Scott’s kitchen on this cozy winter evening is exquisite: healthy, elegant, and beautifully prepared. Because Scott’s grandmother always insisted on a vegetable before eating, meals at Cho Sun begin with a small serving of spicy kimchi, which has a pleasing crunch, and strong but not overpowering heat. The menu, which includes a few Japanese dishes (there’s a popular sushi bar in the back of the restaurant), has something for everyone.

Our party can’t get enough of Scott’s tempura, so light and fresh that we can discern the color and shape of the vegetables inside the batter. The curry calamari tempura is especially fine, a heavenly combination of crisp and tender. Pok explains that good tempura depends on fresh oil, and indeed that same light-handed quality appears in other fried items: the teriyaki potato, for example, or the splendid kimchi pancake.

One of the pleasures of the menu is the distinct flavors in each dish. The pancake, for example, served in pie slices on a bed of shredded cabbage, tastes entirely different from the kimchi with which we began the meal — milder, almost savory. The “hot-stone bibimbap,” a traditional favorite, is an aromatic mélange of rice and vegetables with a choice of beef, chicken, shrimp, calamari, or tofu. The fried egg that tops the dish must be scored with a spoon, the yolk then mixed through the still-sizzling bowl — a spicy hot sauce, served on the side, allows for as much added heat as the diner desires. Chop-chae, another vegetable-meat dish, includes sweet-potato vermicelli noodles, translucent and hearty, a Korean version of comfort food.

The wine drinkers in our party, though pleased with the Malbec we’ve ordered, agree that wine feels almost superfluous in the face of so many lovely flavors. Scott’s favorite menu item, the modestly named “spicy tuna entrée,” is a knockout dish like nothing we’ve ever seen. Gorgeously assembled, it comprises a cool, crisp layer of shredded Korean pears, a pyramid of pristine raw tuna, subtly spiced with wasabi, cilantro, and more “secrets,” and topped with ice shavings made from frozen white wine. What is the Korean word for “wow”?

Named for the great Korean dynasty, Cho Sun reflects its owners’ reverence for the past. Pok has decorated the earth-toned dining room in a tasteful blend of modern touches and items from her antiques collection: dark chests with many tiny drawers; living stalks of bamboo in clear glass vases; mirrors in elaborate frames. The room’s modest dimensions, soft lighting, and excellent acoustics — a full house still allows for intimate conversation — all contribute to a sense of tranquility.

Korean fare differs profoundly from the sauce-smothered “Asian” standbys we Americans have become used to. This healthful, low-calorie cuisine hides nothing; individual ingredients are meant to shine. On this delightful evening of discovery, we decide that Cho Sun shines, too.