In Tiny Stratton, A Roadhouse You Can Bring Your Kids To 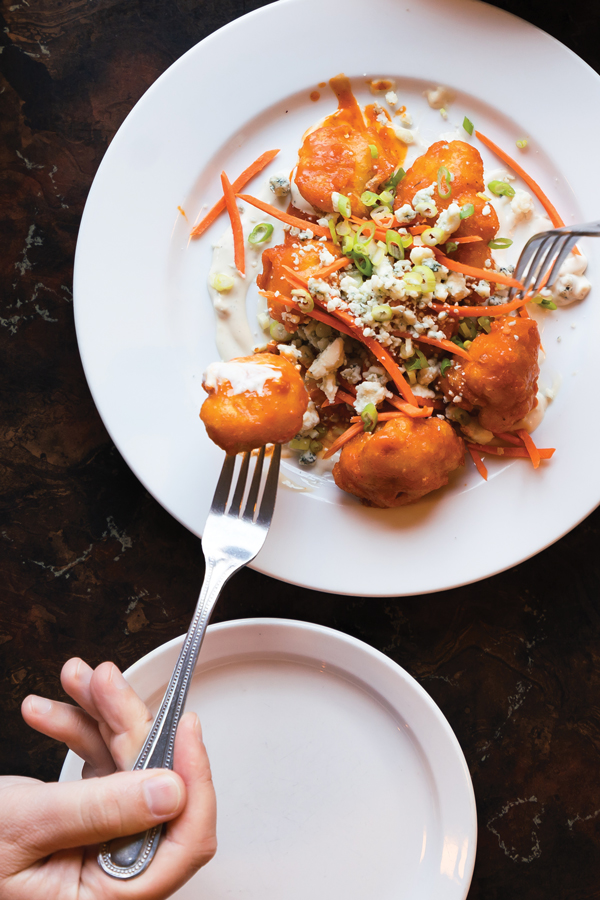 By Will Grunewald
Photographed by Yoon S. Byun

On a bright, colorful afternoon this fall, a middle-aged man and woman sidled up to the counter at Backstrap Bar & Grill, in Stratton, from where a maze of logging roads stretches north and Canada is the nearest thing to the west. “What brings you to the big city?” the bartender deadpanned. “Leaves,” the man said.

“People think you’re crazy to have restaurants here,” Tony Rossi says. Six years ago, he and Heidi Donovan opened the fine-dining Coplin Dinner House, just up the road, and last year they started Backstrap. “For Coplin, it was almost impossible just to convince a bank that it was a good idea to give us a loan.”

Stratton is a tiny village, or really more of a big intersection, with a handful of budget inns, a couple of stores, and a few divey bars. But Sugarloaf ski area is only 10 minutes away, and downtown Rangeley is 20. Depending on the season, Backstrap might be crowded with snowmobilers, Sugarloaf skiers, Bigelow Preserve and Appalachian Trail hikers, local parents and their kids, or leaf peepers. The place has something of a roadhouse­–meets–family-restaurant feel, with the bar on one side of the dining room and booths from the building’s days as the Stratton Diner along the opposite wall.

Clockwise from top: Ramen with pork belly; chef Virgil Brown tosses chicken wings in the kitchen; the reclaimed-wood bar is a fine place for pints; desserts include pumpkin cheesecake and ice-cream sandwiches made with chocolate crinkle cookies.

To handle the day-to-day of their second kitchen, Rossi and Donovan brought in a third co-owner for Backstrap, Virgil Brown, a chef who cooked with Rossi at Sugarloaf and Boothbay restaurants in the late ’90s and early ’00s. The concept for Backstrap quickly took shape. “When people asked what we’d serve at a new place,” Rossi says, “I’d tell them, ‘Whatever all the other pubs do, but a little better.’”

Drink Menu
With a short wine list and no cocktail menu (but a full bar), Backstrap is a place where ordering a pint — of, say, a classic kölsch from Gneiss Brewing, in Limerick — suits the unpretentious vibe.

My wife and I first stopped in after a hike, feeling entitled to calories. Butter-fortified hot sauce clung to fried cauliflower florets atop blue cheese, which came in both dressing and crumbled form. Thick shavings of Parmesan and croutons from leftover marble rye topped a heaping Caesar. The chicken-parm sandwich, set on parchment in a plastic basket, arrived awash in a garlicky tomato sauce Rossi has made for years, laced with tender bits of onion and green pepper.

When he said that Backstrap would serve what other pubs serve, he understated. The menu is eclectic and long. Our second entrée was a bowl of ramen almost as pleasing to gawk at as to eat, with pickled onions, soy-marinated mushrooms, shredded carrots, a slab of grilled pork belly, and a poached egg, all floating in a murky, earthy broth. The kitchen staff creates that broth by simmering, in stages, roasted chicken bones, a mix of celery, carrots, and onions, seaweed, shiitake mushrooms, and bacon and pork shoulder.

On a subsequent visit, we had the crispy chicken sandwich — buttermilk-soaked meat dredged in spiced flour and fried to an enticingly golden brown. Two huge wagyu-beef hot dogs were served with crunchy banh-mi toppings. A white-sauce pizza with roasted garlic, caramelized onions, three types of mushrooms, bacon, arugula, and a drizzle of truffle oil became a substantial helping of leftovers. We were too full to try one of the steaks, from Backstrap’s adjacent meat and seafood market (silhouettes of animals hang on the dining room walls, diagramming various cuts).

We did, however, agree that we had enough room to split a dessert, a big scoop of vanilla ice cream sandwiched between two of Brown’s chocolate crinkle cookies. It was decadent and messy, and I regretted sharing it. Food like that, no matter the season, will keep us coming back to the big city.

A Portland Happy Hour For Everyone

Ski In, Eat Out at Oxbow’s New Beer Garden