East Side, West Side

All around Sebago Lake, people are living the barefoot life.

[dropcap letter=”S”]ebago Lake has a distinct split personality. Along the Route 302 corridor, on the east side, from North Windham and Raymond to Casco and Naples, Sebago presents a public face of shopping centers, fast-food restaurants, marinas, motels, day camps, resorts, and a state park. Along Route 114, on the west side, Sebago is a more private place of modest summer cottage neighborhoods and youth camps.

Once around lightly reveals that Sebago is also a microcosm of summer in Maine — a collection of small towns, where residents and summer people, campers and day-trippers enjoy a freshwater respite from the pressures of everyday life.

And the water is fresh — fresh enough to provide drinking water for 200,000 people in Greater Portland and southern Maine. The Portland Water District so strictly enforces a 2-mile No Bodily Contact zone in Lower Bay that when four Navy SEALs wanted to swim the lake’s 13-mile length to raise money for Camp Sunshine last August, they couldn’t swim from one end of the lake to the other. Instead, they swam a U-shaped equivalent from Raymond, around Raymond Neck and Frye Island, then north to the beach at Point Sebago Resort. 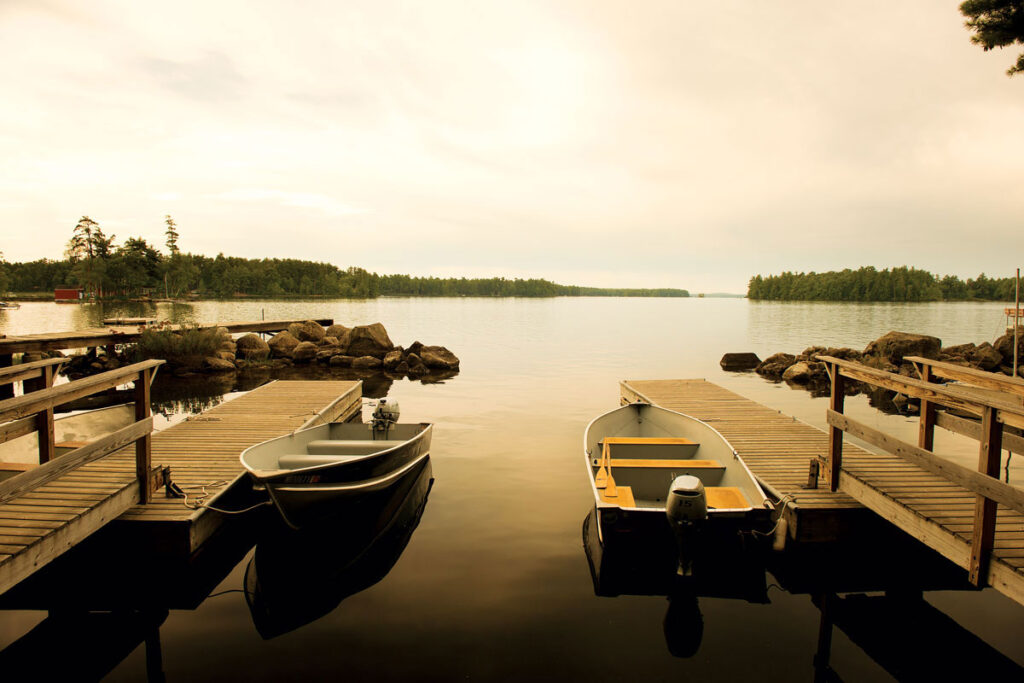 Sebago is the second largest of Maine’s lakes (behind Moosehead) and the deepest, plunging 307 feet in the middle of Big Bay. Within 105 miles of shoreline is contained some 995 billion gallons of water. A 436-square-mile watershed feeds the lake to the north, while the Portland Water District empties it at the southern end. It takes about five years for the waters of Sebago to completely renew themselves.

[dropcap letter=”Y”]ou don’t have to drive far off Route 302 to escape the eastern shore’s commercial congestion and find the rustic, restorative experience for which Sebago Lake is known. Migis Lodge in South Casco is a classic, 99-year-old lakeside resort where, for a handsome fee, you can get a room or a cottage, enjoy three meals a day (a jacket and collared shirt is the dinner rule for gents), and cruise Sebago aboard a vintage wooden Chris-Craft. The lodge’s loyal guests “want the ability to arrive, throw their keys on the dresser, and not have to worry about anything,” says Jed Porta, whose family has owned Migis since 1968. “We want it to feel like home.” 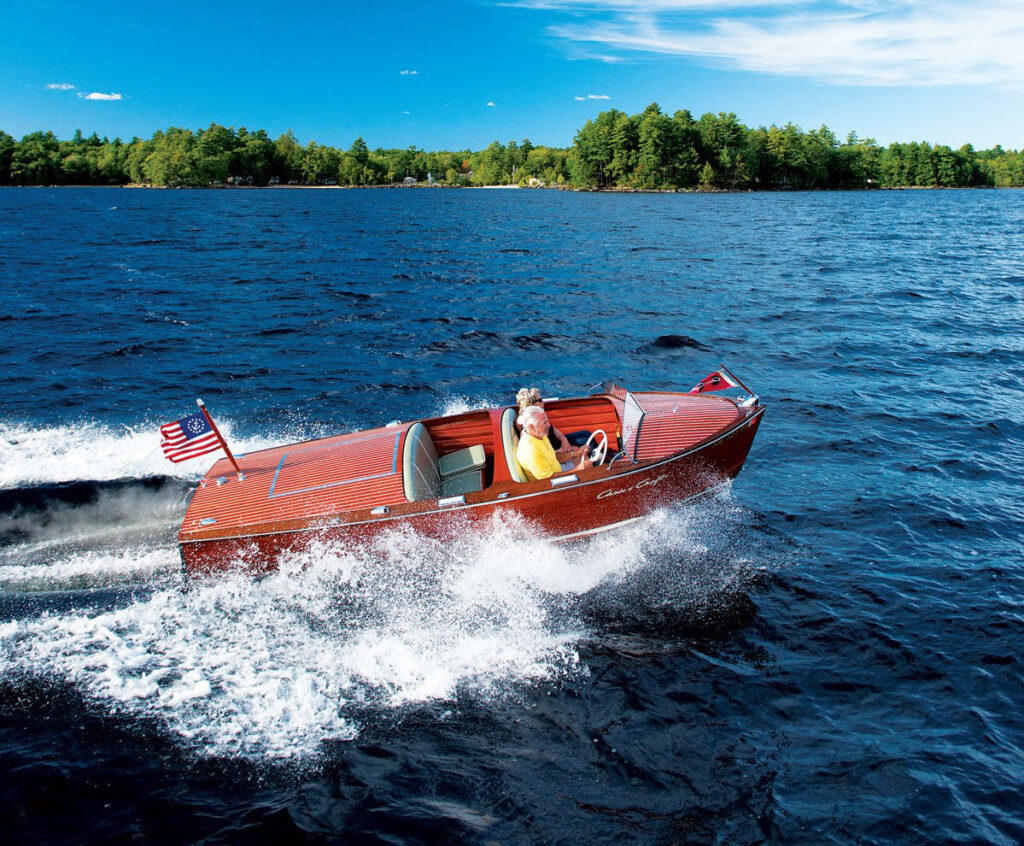 Just north of Migis, on the other side of Kettle Cove, is the beneficiary of the Navy Seals’ seven-hour swim, Camp Sunshine, a retreat for kids with life-threatening illnesses and their families. It’s one of several summer youth camps, some dating back to the turn of the 20th century, that ring the Sebago shore. “It feels like Maine 100 years ago,” says Michael Smith, Camp Sunshine’s director of special events.

Anchoring the north end of the lake at the confluence of the Crooked and Songo rivers, Sebago Lake State Park provides Sebago’s primary public access, with some 90,000 car campers a year using the campground and another yearly 120,000 day-trippers drawn to its sandy beaches.

Strung along Sebago’s western shore are cottage neighborhoods named for the little pieces of paradise they lay claim to — Nason’s Beach, Long Beach, Simpson’s Beach, Wards Cove, Harmon’s Beach. Each is a family-oriented summer settlement intent on the barefoot life — swimming, fishing, boating, waterskiing, tubing, and cookouts. Jordan’s Store at Long Beach is the only year-round market, a classic country store decorated with trophy fish and providing everything from groceries and hot food to fishing and hunting gear. Jordan’s opened in 1925 and has been owned and operated by Carroll Cutting and his family since 1958. Turnover is slow around Sebago, which is just how the lake people like it.

Because so much of the west side of the lake is private property and so much land around the south end is owned by the Portland Water District, the town of Standish has never had much public access to the lake. That may finally change in 2016, when negotiations over the lease to Boaters Beach are expected to be completed. Owned by the Water District, Boaters Beach is a sandbar accessible only by boat, and — for now at least — only to 300 member-families of the Sebago Boating Club, which has leased the beach for 30 years. On bright summer days, as many as 100 boats pull up to this slender strip of sand, which fills up with swimsuited families splashing, sunbathing, tending grills, playing volleyball. 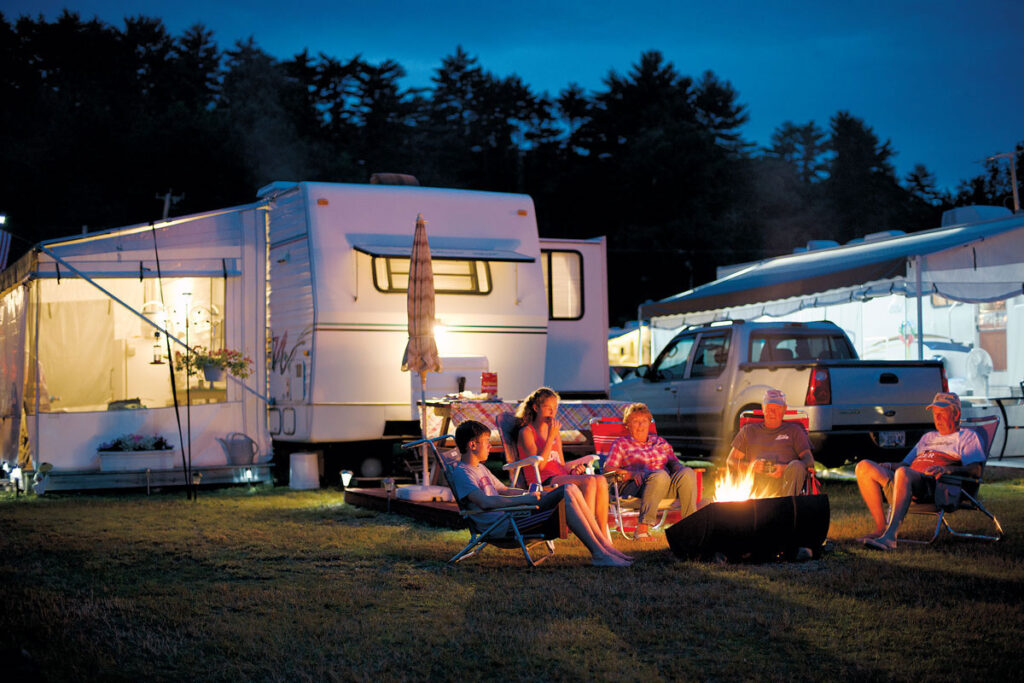 Earl Cutter, a retired Westbrook High School teacher with a camp at Sebago Acres, just north of Boaters Beach, says the sandy summer rendezvous was his children’s favorite lake attraction when they were little. As the years have passed, the lake has come to figure more prominently in his family’s life — a place to have weddings, celebrate anniversaries, and hold parties. The appeal of life at the lake, says Cutter, is the temporary release from day-to-day cares. “When you turn down the camp road, you block out the rest of the world,” he says. “All that matters is the world that is before you.”