Summer is unarguably the best time of year to drink beer — at picnics and ballgames, on boats and at barbecues, at sunny, seaside beer gardens. Whatever the setting, these five brews are eminently quaffable.

Allow us to throw down the gauntlet: Maine’s craft beer scene right now is as vibrant, creative, and vital to American brew culture as in any state in the country. Five years ago, Maine hosted some 30 craft breweries. Today, we’re up over 60 (with taprooms galore!) and they’re churning out some of the nation’s tastiest and most inventive brews. We’re not saying these are Maine’s five best beers . . . but we’re not saying they’re not. 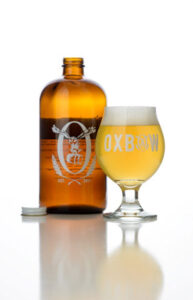 While the bulk of the country’s craft breweries are committed to hoppy and English-inspired ales, Maine’s brewers have been ahead of the curve in embracing more obscure Old World beer styles. Oxbow’s Grizacca is a great example, a remix of an old thirst-quencher called a grisette, a kind of mildly alcoholic Gatorade for 19th-century Belgian coal miners. It’s a light, tart beer that smells like melon and freshly cut grass, brewed to be refreshing rather than wildly potent or complex. Grizacca is the perfect chaser after a long shift on a hot day, a reminder that Oxbow’s great achievement in its four years has been to obliterate the distinction between a craft beer and a workingman’s beer. Draft only. 274 Jones Woods Rd., Newcastle. 207-315-5962. 49 Washington Ave., Portland. 207-350-0025. oxbowbeer.com

In 2011, this spectacular India Pale Ale (IPA) launched a pair of nano-brewing brothers to what passes for stardom in the craft beer world. For a while, they couldn’t keep it on shelves. It’s still one of the most sought-after beers brewed in Maine, and its list of accolades defies easy summary (it’s among the highest-ranked beers nationally on BeerAdvocate, the online mecca of beer geekery, with a “world-class” score of 98/100). Just waving your nose over this beer is like snorting flower petals and grapefruit. But despite its wicked bouquet and a respectable 7 percent ABV, Lunch doesn’t pack a wallop. It’s complex, very hoppy, and slightly sweet, in an astringent way. Admired (and consumed) by many Maine brewers, Lunch is the beer equivalent of that knockout meal the chef makes at home on her days off. On draft and in bottles. 525 Rte. 1, Freeport. 207-221-5711. mainebeercompany.com

A gift to the world from the Germans and the Czechs, the blonde and bubbly pilsner seems to get as much respect in Maine as in any U.S. state outside of German-settled Wisconsin. And that’s a good thing, since a light and bready pils is a treat on a hot day. Banded Horn’s unfiltered take on the style pours beautifully, with a curtain of yeasty cloudiness and vigorous bubbles. Served nice and cold, the brewery’s flagship beer goes down easy, with a smooth and herbal finish, and at just 4.6 percent ABV, you can knock a couple of these back and still remember some of the German you learned in high school. On draft and in bottles. 32 Main St., Biddeford. 207-602-1561, bandedhorn.com

Bright, citrusy, and smooth, this American ale lacks the bitter finish that characterizes an IPA, but its hop profile is so pronounced that it’s often mistaken for one. It’s brewed with a blend of Citra and Simcoe hops — the former floral, the latter piney, and both often compared to tropical fruit. Not that you need to know any of that to enjoy this crisp, low-alcohol brew (at just 4.3 percent ABV, it’s the lowest on this list). MITA goes down like the perfect glass of lemonade — so easy-drinking, you can overlook the complex balance of flavors that makes it work. And yep, a portion of the profits benefits the Maine Island Trail Association. On draft and in cans. 103 Fox St., Portland. 207-370-2337. risingtidebeer.com

Fact: When Allagash founder Rob Tod first brewed this gorgeously opaque, lightly spicy, impossibly refreshing wheat beer in 1995, most Americans knew Belgium only as that place where they made waffles. Allagash White helped launch today’s craft beer scene, winning over beer drinkers unaccustomed to cloudy pints and subtle hints of coriander. Allagash celebrates its 20th anniversary this summer as an industry titan (it’s the nation’s 50th biggest brewery by sales volume), and its most ambitious projects (wild-fermented brews, experiments with fruit and honey, international collaborations) are light years ahead of its now ubiquitous flagship wheat. Still, there’s not a beer geek around who doesn’t swig a glass of this grand dame a few times a summer and shake her head in wonder. On draft and in bottles. 50 Industrial Way, Portland. 207-878-5385. allagash.com

+ Beer festivals to look forward to this year include the Maine Brewers’ Guild Beer Festival on July 25 in Portland, Maine Lakes Brew Fest on September 26 in Casco, and inaugural Aroostook County Brewfest in Mars Hill on October 17. For a look at four more beer festivals happening this month, check out our Guide Calendar. On June 29, join associate editor Brian Kevin for a Down East beer tour around Portland — click the ad below for details!