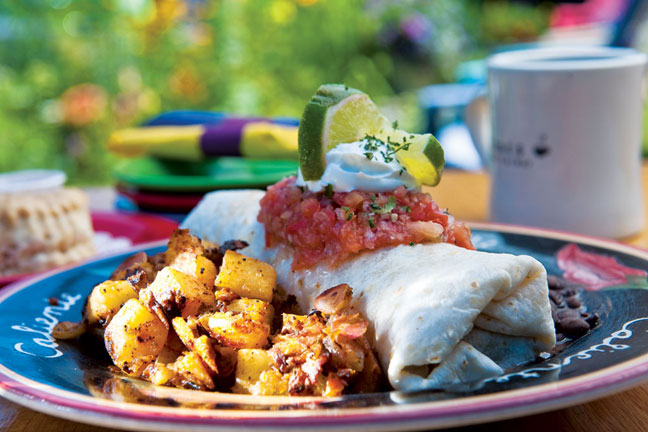 By 9:30 on a sunny summer morning, people are spilling out all over the place at 2 Cats, a rambling, red-roofed inn and breakfast place on Cottage Street in Bar Harbor. Cyclists in spandex sit on the steps waiting for a table on the shady wraparound porch. T-shirted tourists loll in pastel Adirondack chairs on the lawn and young parents in hiking boots smile as their toddler points to the funky sign of two black felines dancing and shouts, “cat, cat!”

2 Cats cranks out three hundred to five hundred breakfasts every morning at the height of the season, according to owner Ernie Geiger, who bought the restaurant with his mother, Betsy, in 2000. Geiger says serving only breakfast has its perks. “Our day is done by 2 in the afternoon, so I get to spend the evening with my family,” he says.

Although 2 Cats serves only breakfast, it is one of the few Maine restaurants to do it as an art. “The menu has something for everyone, Geiger says, “whether you’re just a bacon-and-eggs person, or you’re looking for something different.”

The vibe in the two dining rooms is laid-back and homey, with salmon-colored walls, tatted lace curtains, and the Grateful Dead jamming on the sound system. An old upright piano holds cat knick-knacks and books. Simple wood tables are stenciled with paw prints. The blender whirs in the background in smoothie overdrive.

2 Cats has tended toward slow food long before it was the thing. Many ingredients are organic, including the excellent Fair Trade coffee, everything is made from scratch, and the orange juice is always freshly squeezed. Consequently, breakfast can take longer than one might expect in a bustling tourist town, but the meal is worth the wait.

A fine place to start is with a side of 2 Cats biscuits. Tender and flaky, they are the perfect delivery vehicles for the strawberry butter that accompanies them. Another sweet treat is the cat’s paw, a sort of hybrid between a biscuit and a sticky bun.

“The cat’s paw was my mother’s own creation,” Ernie says. “We wanted something like monkey bread, but wanted to use the biscuit dough, so she rolled little biscuit balls in cinnamon and brown sugar, put them in muffin tins, wedged pecan halves in between them, and drizzled caramel sauce over them. When they came out of the oven, someone said, ‘That looks like a cat’s paw!’ ”

Eggs take center stage at 2 Cats in intriguing dishes like the Mediterranean breakfast. Two poached eggs are perched atop grilled sundried tomato polenta on a bed of baby spinach. The whole shebang is topped with homemade caponata, the classic Sicilian relish of eggplant, tomato, olives, capers, olive oil, vinegar, and herbs, and sprinkled with fresh feta cheese. The subtle sweetness of the polenta is the perfect complement for the olive-spiked caponata and salty tang of the feta. The eggs meld everything together.

Other egg dishes include the popular Farmer’s Breakfast, scrambled eggs with onions and peppers, served with spicy sausage; and creative omelets filled with combinations like smoked trout, red onion, dill, creamy horseradish, and cheddar cheese. 2 Cats also offers interesting twists on eggs Benedict, including a veggie version with roasted red peppers and spinach, and a lobster Benedict popular with summer visitors. Both Benedicts are served atop biscuits, and all egg dishes come with a side of spicy home fries with just the right amount of heat. And if all of this flavor is just too much, you also can order the “Ho Hum”: two eggs with spicy homefries and a biscuit.

Ernie and Betsy, who moved to Bar Harbor from Torrington, Connecticut, twenty years ago, bought 2 Cats from Sue Jones, the previous owner. They’ve kept everything on the original menu, but expanded and updated the offerings with the inventive pancakes, tofu scramble, veggie sausage, and other items. The other items that have changed are the cats themselves. “We have had a few cats with the title ‘One of the 2 Cats,’ says Ernie, “but currently their names are Baby and George.”

What hasn’t changed is 2 Cats’ reputation among locals and visitors alike as the place to fuel up before a hike, bike, or paddle in Acadia National Park. Open ten months of the year, and weekends in January and February, 2 Cats serves more than 52,000 breakfasts a year, according to Geiger.

One could easily imagine that Geiger, who manages the front of the house and has put in plenty of time in the kitchen, would get tired of breakfast, but he says that’s not the case. And his favorite thing on the menu? “I’m simple — traditional eggs Benedict on our biscuit, but only for a treat,” he says.

Recipe: Biscuits for a Crowd

Preheat oven to 350 degrees. Place all ingredients in mixer with dough hook attachment and mix on low until dough is gathered and no loose flour remains. Roll out to ¾ inch thick and cut with your favorite biscuit cutter. Bake at 350 for 25 to 30 minutes.  For best results, use convection oven. Makes 40.