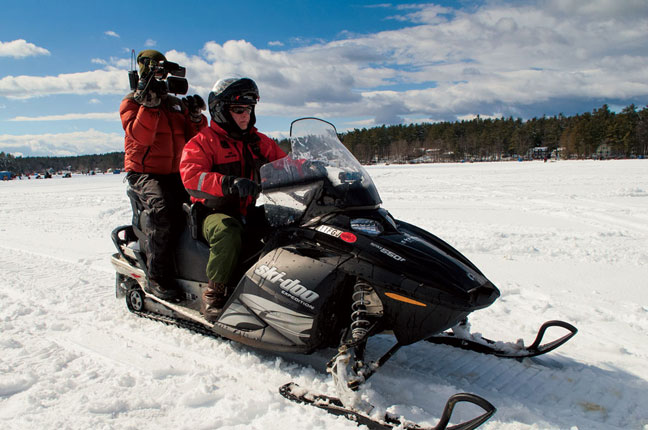 My bulletproof vest weighs five pounds. It hangs heavily on my shoulders and fastens around my torso with Velcro straps. Looking at myself in the hotel mirror wearing body armor is an early indicator that the day ahead might be a departure from my usual writing assignments.

Wearing a ballistic vest is mandatory for anyone who works on the reality television showNorth Woods Law — joyriding journalists included. The program, which airs on Thursdays at 10 p.m. on Animal Planet and documents the activities of game wardens in the state of Maine, isn’t exactly a backwoods version of COPS (more about that in a moment), but whenever you ride along with law enforcement officers, all bets are off. The Maine Warden Service can’t guarantee our safety, explains the series field show runner Devon Platte. He and I are drinking coffee in the lobby of the Comfort Inn in Wilton while his team assembles a small mountain of audio and visual gear.

“Have you ever been shot at?” I ask him.

“Not yet,” Platte says with a smile that makes me tighten the straps on my vest.

In their first season of filming — six episodes aired in 2012 — the North Woods Law camera crews encountered hit-and-run archers, a marauding black bear, trip-wired marijuana plots, and more armed and/or intoxicated jackasses than you could count.

Today we will be accompanying Warden Kris MacCabe on patrol in the autumn-bright foothills of western Maine. There is a plan, of sorts: MacCabe has received a tip about several illegally shot turkeys in New Sharon, and he wants to investigate after a brief detour into moose country. But the crew of North  Woods Law understands that in a warden’s life nothing ever goes according to plan.

When MacCabe arrives, he patiently submits to having a microphone attached to his uniform and a GoPro camera attached to the dash of his black GMC Sierra. Cameraman Joe Brunette will ride shotgun and be his constant companion for the next twelve hours. During this time, MacCabe will need to keep up a running monologue, explaining to TV viewers what he is doing, all while going about his duties as normal. One inviolate rule of the series is that the filming can in no way impede the wardens from doing their jobs.

The rest of the team — Platte, field producer Ben Shank, cameraman Daniel Sites, and me — piles into a Suburban that will tail MacCabe’s truck all day. Shank communicates via walkie-talkie with Brunette, and thanks to MacCabe’s microphone, we can hear over a speaker every word he utters.

A veteran of the first season, MacCabe knows the ropes and has even picked up some of the TV biz lingo. He jokingly points out a fire tower on Tumbledown Mountain where Brunette might get a “hero shot,” referring to the iconic pose an actor strikes on a movie poster.

First stop is Beal’s General Store in Strong, where a hunter has brought a moose to be weighed (950 pounds,  not bad). It’s the twenty-sixth moose the station has tagged this week. MacCabe’s supervisor, Sergeant Scott Thrasher, has just arrived when an emergency call comes in: A bear has just gotten into a pigpen in nearby Salem Township.

“I’m going to smoke it over to the house,” MacCabe warns us over the speaker.

And away we go.

When the second season of North Woods Law premiered in January, 1.3 million viewers tuned in to catch up on the adventures of Wardens MacCabe, Thrasher, LaFlamme, Spahr, Curtis, and other quiet professionals who never dreamed of becoming celebrities. The show, which has set ratings records for Animal Planet, is a bona fide hit. Last fall, the Maine Wildlife Park in Gray hosted a North Woods Law day. More than 1,200 fans waited three hours to meet and get autographs from their favorite wardens.

To audiences raised on the cartoonishness of shows like COPS (where every chase seems to involve an intoxicated man not wearing pants), the popularity of North Woods Law may seem surprising. You’re less likely to see a gunfight in a typical episode than you are a warden hunting down a rumor that some nut is keeping an alligator in his basement. One of the most chatted-about story lines from season one featured MacCabe’s efforts — using a hat and a box — to rescue an icebound loon.

Executive producer Jessica Winchell Morsa thinks the offbeat nature of the story lines is one of the secrets to its success. “The wardens do this all day every day,” she says, “and sometimes they don’t realize that what they’re doing is so interesting.”

The ninety-five or so field officers of the Maine Warden Service are the state’s off-road police force. New wardens attend the Maine Criminal Justice Academy alongside municipal cops and sheriffs’ deputies. While they are charged primarily with enforcing hunting, fishing, boating, snowmobiling, and ATV laws, wardens also have the authority to arrest persons suspected of everything from speeding to murder.

It was this unusual combination of law enforcement and wildlife that attracted the interest of New York–based Engel Entertainment. The company, which has also made documentary series for National Geographic, Oxygen, and Discovery, developed the idea over the course of several years. Engel president Steve Engel describes the process: “With the proliferation of law enforcement shows and the fascination people have with the state of Alaska, our development team asked, ‘What was Alaska before Alaska?’ And they concluded it was Maine.”

The Maine Warden Service had rejected offers from other producers who they worried might depict Maine in a melodramatic or negative light. Since state law prohibits wardens from being paid to take part in the show, the only benefit the department gets is an educational and recruiting tool. “Our goals for this project are increasing public awareness of the job of Maine game wardens and our entire career field across the country, and to build public support,” says Cpl. John MacDonald, the liaison between the service and the show.

It’s not that North Woods Law has lacked controversy or moments of high drama.

The first episode drew flak for showing Warden Rick LaFlamme shoot a bear that had wandered into Portland’s East Deering neighborhood. Cpl. John MacDonald says the challenge was getting inside the warden’s thought process as he assessed the situation. “The worst-case scenario is that the bear went after somebody or it ran out onto the turnpike,” MacDonald says. “Would that have happened? We don’t know, but we weren’t going to let it happen.”

Even so, there is a limit to how much information the show can impart. Viewers who wondered why the warden didn’t tranquilize the bear didn’t know that sedating a large animal is tricky business requiring a well-trained wildlife biologist. Nor did they understand that the incident took place during bear-hunting season. If the Portland bear had been tranquilized and released into the wild, there was a chance it might have been shot by a hunter. The lingering sedatives in the animal’s system could have harmed anyone who ate the contaminated meat.

When we arrive at the farm in Salem where it was reported, we find no one home. Nor are there any pigs in the pen. There is, however, lots of blood and guts. MacCabe and Thrasher inspect the enclosure, but they see none of the scratches a bear would have inflicted reaching for his ham supper. “A bear would have just torn through this,” says MacCabe. The wardens huddle and conclude that the pigs were probably attacked by a nimble coyote that leapt over the wall. (We later learn that the homeowner has euthanized his three wounded pigs and taken them to be butchered.)

While the wardens go about their business, the North Woods Law crew circles, as inconspicuous as men with cameras and microphones can be. Occasionally, Shank will ask MacCabe or Thrasher to pause and address the camera in what is called an “OTF,” or “on the fly,” interview, explaining what he is doing for the viewers at home.

In television everything must occur in the present tense. “We need to have [the action] happen in front of us,” explains Platte.

The producers respect the wardens’ stance. “If we don’t keep the relationship positive and communicative with the Warden Service, we don’t have a show,” says Morsa.

In the field, I am struck by the ease with which the camera crew interacts not just with the wardens but with the Mainers they meet on their travels. Leaving Salem, we head for the Sandy River Farm Supply in New Sharon where two separate men had brought turkeys they’d shot to be tagged. Everyone at the store seems to be a fan of the show.

The firearm season won’t open for a week, so the question for MacCabe and Thrasher is whether the men misread the rule book or are canny liars, feigning ignorance. The investigation takes all day, with the wardens teasing information out of the two elderly hunters. I am struck both by the subtlety of their interrogations and the willingness of the rules violators to appear on camera.

By nightfall, my vest feels like it weighs fifty pounds. Will the events I’ve just witnessed make it onto the show? Platte thinks the misinformed turkey hunters storyline has potential, but it depends on what tomorrow brings. “If we get one episode out of a week’s filming, we’re lucky,” he says.

Paul Doiron is the editor in chief of Down East and author of the novels The Poacher’s Son, Trespasser, and Bad Little Falls featuring Maine game wardens.