From our 100 Maine Books package: How do the big-screen versions of these top-notch Maine books measure up? 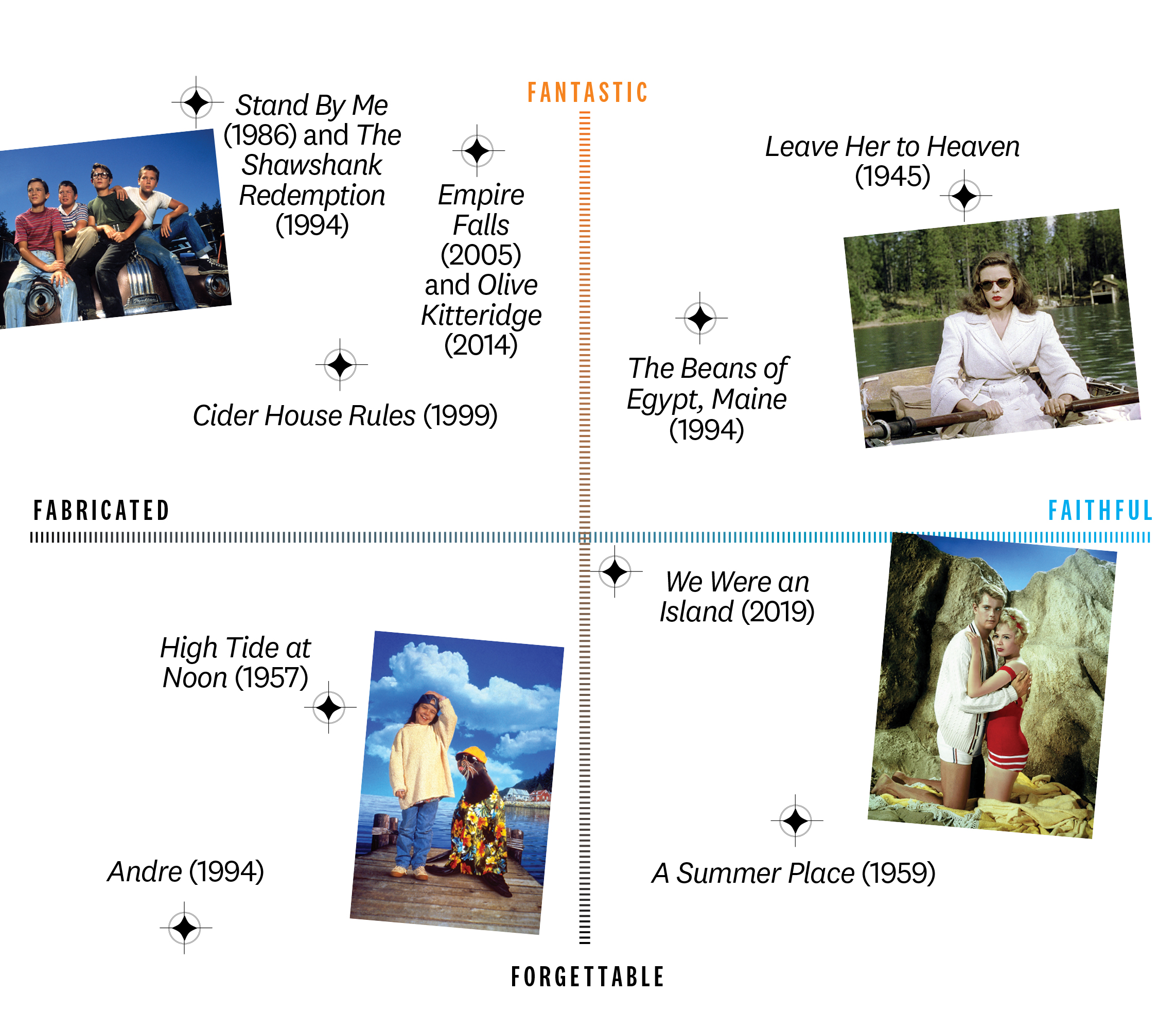 Stand By Me (1986) and The Shawshank Redemption (1994): Stone-cold classics, based on novellas from Stephen King’s Different Seasons. But Shawshank turns a white, Irish protagonist into Morgan Freeman, and Stand By Me moves the story from Maine to (are you kidding?) Oregon.

Empire Falls (2005) and Olive Kitteridge (2014): HBO made this pair of Pulitzer winners slicker and slimmed the large slates of characters, but both are novelistic in their patient unfurling and perfectly cast. Hard to read Elizabeth Strout’s prickly heroine afterwards and not visualize Frances McDormand.

Leave Her to Heaven (1945): Great old film noir, based on Ben Ames Williams’s bestseller, with Gene Tierney as the femme fatale — cold as ice as she lets her husband’s brother drown at their Maine lake cabin.

The Beans of Egypt, Maine (1994): In this indie, the dialog and backwoods grit of the ne’er-do-well Bean family are largely true to Carolyn Chute’s bestseller, a regional grotesque tackling rural poverty and pride, misogyny and misanthropy.

We Were an Island (2019): An independent short film, stagy but poignant, based on Peter Blanchard III’s lovely book of the same name, recounting the romantic hermitage of Art and Nan Kellam, the sole occupants of an island off MDI for 36 years.

A Summer Place (1959): Basically hews to the plot of Sloan Wilson’s 1958 novel about class and forbidden love at a Maine resort, but trades deeply developed characters for pretty faces (Sandra Dee!), innuendo, and that catchy theme.

High Tide at Noon (1957): Elisabeth Ogilvie’s debut novel is a rich family saga about a Maine island clan. The film’s a schlocky melodrama that swaps out Maine for (are you kidding?) Nova Scotia.

Andre (1994): Andre the Seal, hero of Harry Goodridge and Lew Dietz’s well-told 1975 nonfiction animal-buddy tale A Seal Called Andre, did nothing to deserve this hackneyed kids’ flick, complete with a seal-assassination subplot and a sea lion playing a harbor seal.