Why We Hunt: Management 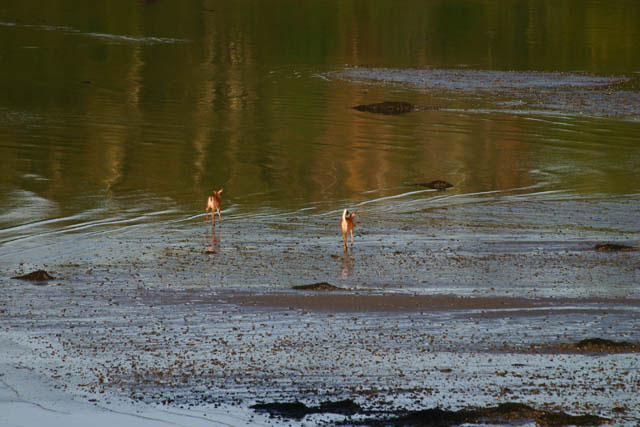 The Man who Killed Every Deer on Monhegan

…did so at the request of the islanders. Meet the globetrotting biologist who the newspapers call “sharpshooter.”

As told to Brian Kevin

[D]r. Anthony DeNicola is the founder of Connecticut-based White Buffalo, Inc., a team of biologists and veterinarians for hire who help control wildlife populations worldwide via controlled hunts, sterilization programs, and sharpshooting. In 1997, DeNicola and his team were hired by the state of Maine to eradicate the deer herd on Monhegan. Introduced decades before, the island’s 80 or so deer had come to be considered a nuisance, thanks largely to overbrowsing and their role in the spread of tick-borne illnesses like Lyme disease. In 2000, again at the request of the islanders, he killed 172 deer in five days on Peaks Island, thinning that herd to around 60 animals. This fall, the island town of Islesboro considered (and ultimately voted down) hiring DeNicola to reduce their deer numbers, after two years of special hunts that have failed to adequately shrink the herd there — or reduce the skyrocketing instances of Lyme disease.

My wife gets ticked sometimes, because I went through 11 years of post-secondary education and am involved in all kinds of research, only to get billed as a “sharpshooter.” I finished my PhD at Purdue in 1996. By training, I’m a wildlife ecologist. I’m trying to understand relationships between the environment and wildlife, including how humans play into that whole circle. In Maine, I’ve partnered with Maine Medical — they’re the experts in ticks and tick-borne diseases. So they do their research, and I do the deer end of things, and we publish together.

The emphasis on tick control has only started recently. In the past, over 90 percent of the situations I’ve been involved with have been prompted by deer-vehicle collisions. The public safety aspect of that allows politicians to vote to kill deer, because as you know, it’s obviously quite controversial.

Now with Lyme disease, we have what I call our best science. What the models show, and what we’ve shown on Monhegan, is that you can almost eliminate the risk of Lyme in the absence of deer. Well, we’re not going to eliminate deer everywhere, right? But the computer models show that if you can reduce deer density to about 8–10 per square mile — which is pretty low — there aren’t enough hosts for adult ticks to reproduce. Can we reduce densities low enough to have a measureable decline in tick abundance and cases of Lyme disease? That’s what we’re asking on Islesboro, for instance.

It can seem kind of cruel, but there’s no sport in this.

The most vital part of these projects is being able to bait animals in a very systematic way, attracting deer to specific locations where: 1) we have permission, 2) it’s safe, and 3) they’re at a great disadvantage, making them vulnerable. Whole kernel corn is the ideal bait, and a three-person team is optimal for proficiency.

[W]e made one visit to Peaks Island in 2000. We have what we call our seated afternoon period, where we place the bait in a certain way and wait for the deer to come. On Peaks, we were able to drive around, interfacing with deer on properties where we had permission, shooting them from the road. Sometimes we would drive from location to location all night long. These are all things we do under a special permit: baiting, hunting after dark, shooting from a vehicle, using a suppressor to reduce noise on a firearm.

We work in the afternoon and evening so that when we’re done, it’s dark, and we can work more discreetly getting carcasses out. This can be problematic on an island. We contacted a gentleman who has a livestock butchering company, who goes up to the moose hunts every year. He’s designed tractor-trailers with full processing facilities, freezers, and coolers — everything right in these 48-foot trailers. So we brought the entire facility to the island, then brought him the animals that had been euthanized. He does all the eviscerations and skinning, puts them in the cooler, and the next day, he can start butchering. Everything is self-contained, everything leaves with him, and he can bring all the frozen packages of meat right to the soup kitchen. [Note: Lyme disease is not transmitted by eating venison.]

It can seem kind of cruel, but there’s no sport in this. The goals are efficiency, humaneness, and obviously safety. We only shoot deer in the brain, which is classified as a form of euthanasia by the American Veterinary Medical Association. If you’re hunting, by contrast, you might just focus on hitting vital organs.

Just opening up a hunting season to control these populations is purely symbolic. It’s a small portion of hunters who are going to think like a manager and be committed to putting the time in for a project like this. I’m working with another community in Indiana that’s been hunting deer for 14 years, and they can’t get below the magic number that would allow for optimal forest health, never mind tick control. And on Peaks, for example, you’re just not going to let a bunch of guys go out there in the winter, running around with shotguns in a residential neighborhood.

The plan on Monhegan was initially to come in and drastically reduce the herd, then the local hunters — who are essentially the island’s lobstermen — were going to maintain it. Well, the lobstermen basically said, we don’t want even these low numbers, and they were openly unwilling to maintain that. So that was a two-year process: first the reductions, then they asked us to do eradications. The next winter, we went out at least three times. To find that last animal is a substantial undertaking. We used snow-tracking, so as soon as Monhegan got snow, I dropped everything, and a special ferry took me out there.

I’d worked there long enough to know how deer move in the landscape, but in some respects, there’s always luck involved. I killed the last four deer on Monhegan myself. Three of them, all female, happened to come right by me one day, and I was able to shoot all of them right there. There was one male left, a fawn, and we just tracked him down and dispatched him. Then we backtracked every track in fresh snow to validate that every deer was shot. No one has ever seen a deer track — in the snow or otherwise — since we left. That was 15 years ago.

Furloughed By COVID, She Became a Champion for Maine’s Black-Owned Businesses